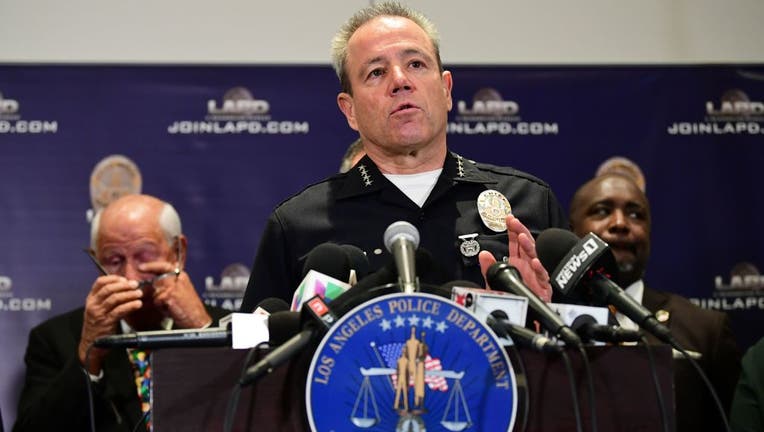 During Tuesday's Police Commission Meeting, Moore said 282 alleged felony assaults have taken place compared to 110 this time last year. He also said most of the incidents took place during ongoing protests against police brutality that began in late May.

"I'm also calling out to our community leaders and elected officials to voice their support of our people, and that there's not a tolerance for violence against police officers," Moore said. "I hear the need for many changes about our society, including policing, but these numbers are troubling, and these trends are serious."

Moore said there was basically no change in the number of assaults against police officers between 2018 and 2019.

"As instances occur, regardless of the setting, it is time. It is needed for our community leaders and others to step up for our voices to be heard," Moore said.

Moore mentioned attacks that took place over the weekend, which included a Saturday incident when man entered the Los Angeles Police Department's Harbor station in San Pedro and allegedly knocked an officer to the ground, took his gun, pistol-whipped him and attempted to shoot him.

That assailant was later taken into custody, and the injured officer was expected to make a full recovery, Moore said.

Also, a shooting took place Saturday when an SUV driver fired shots at a car driven by an off-duty LAPD officer in Reseda, but the officer was not hit. The shots fired at the officer missed him but hit his car, the LAPD reported.

When asked by Police Commissioner Steve Soboroff whether the reduction of $150 million in funding authorized by Mayor Eric Garcetti and the City Council has contributed to the police department's ability to defend itself or to respond to incidents, Moore said he does not think it has.

"We are continuing to work on our reorganization," Moore said. "Right now, we are reducing ourselves downsizing this organization by 500 personnel, and our commitment is to maintain the safety ... by working with all of our communities."

The LAPD has about 9,900 sworn officers and roughly 3,000 civilian employees.

Moore said officers have been stressed over the current general consensus about police officers since the protests started this spring, in response to multiple incidents of Black people being shot or killed by law enforcement officers nationwide.

"We can all understand on a very human level why everyone is under stress and why law enforcement in particular is under stress," Police Commission President Eileen Dekcer said, adding that she wanted to know what the LAPD is doing to keep its officers calm under the duress of their job.

Moore said he is trying to facilitate more communication among officers who are feeling the stress of any threats against them.