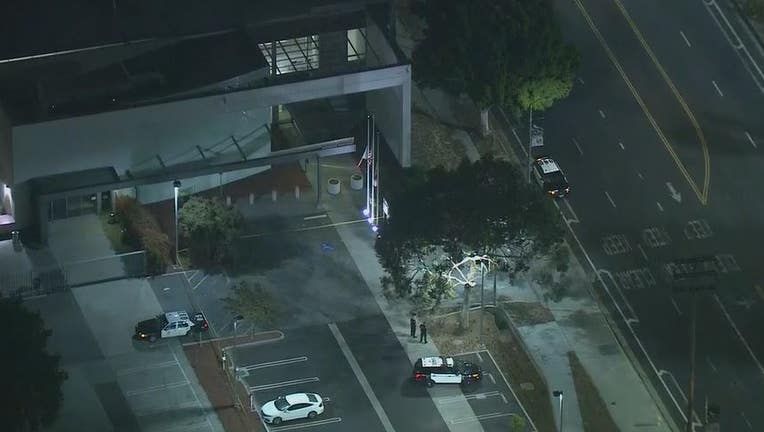 When Los Angeles Police Department Chief Michel Moore stepped inside the Harbor-UCLA Medical Center room where he found the injured Harbor Station employee, he confirmed his officer had not sustained head wounds or bullet fragments, but rather, "bumps and bruises."

In fact, the officer hadn't been shot at all, as had originally been feared.

"He is resting and will be ok," Moore announced via an official social media update, adding he believes the police had quickly identified the suspect. "Harbor units responding, pursued suspect and took him into custody," the police chief wrote.

The LAPD's stations are currently closed due to the coronavirus pandemic, but officers do answer the door when there's a knock.

On Saturday, an officer went to meet with an individual in the Harbor Station lobby, but their conversation went south quickly, Moore told reporters outside the hospital.

"During the altercation, it appears at this very early stage, that the officer's weapon was taken from him and rounds were fired by the individual at the officer," he said.

No one was struck by any of the bullets, according to reports.

The suspect bolted, setting off a brief chase, followed by the arrest of a man who was believed to be around 29 years old, Moore said.

Mayor Eric Garcetti was quick to show his support.

"Sending my best wishes for a quick and full recovery to our @LAPDHQ officer injured in an incident at the Harbor Station tonight," Garcetti said on Twitter Saturday. "The officer is in stable condition and we're closely monitoring the situation."

The incident comes weeks after two Los Angeles County Sheriff’s deputies were shot in an ambush-style attack in Compton.

Sheriff Villanueva says there is a growing trend of police being targeted in the current climate.

“Something horrible is happening in our country. There is too much of a divide in our values in law enforcement. Let’s be reminded that our police officers are our angles in the City of Angeles. They protect us. Folks call 911 and LAPD responds, sheriff’s deputies respond. Tonight was yet another reminder the dangers and risks officers face,” stated LA Councilmember Joe Buscaino.

Early Saturday morning, an off-duty LAPD officer driving in his personal car was shot at by another driver in Reseda. The officer was not injured, bullets only hit his vehicle.