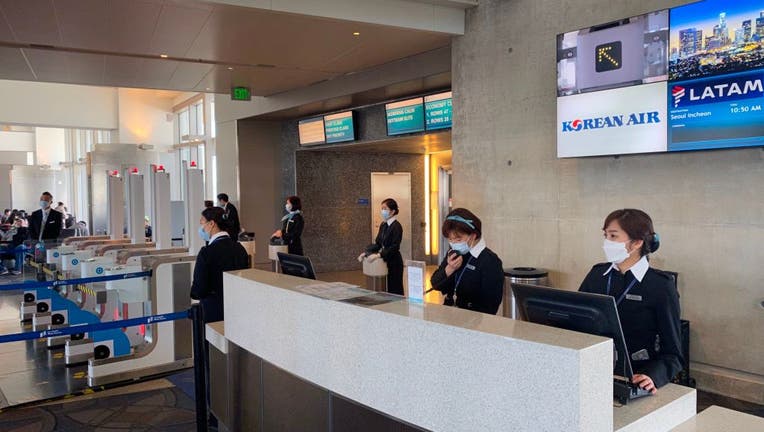 Korean Air employees are seen at Los Angeles International Airport (LAX) wearing masks, to prevent the coronavirus infection,COVID-19 on February 12, 2020. - The UN health agency on Wednesday cautioned it was "way too early" to say whether COVID-19 m

LOS ANGELES - Health and emergency-management officials told a Los Angeles City Council committee on Wednesday there is "no reason to panic" locally about the coronavirus known as COVID-19 that has spread around the world, but they said preventative measures are being taken.

"The current risk to L.A. County residents for getting COVID-19 is very low. The best things people can do to protect themselves from any respiratory virus, including COVID-19, are the simple, everyday preventative measures such as washing hands, covering your cough and avoiding going out when sick," said Dr. Prabhu Gounder, medical director of the Los Angeles County Department of Public Health's respiratory diseases unit, which is leading the county's response to the outbreak.

RELATED: US citizen who recently traveled from China quarantined at Point Mugu Naval Base

"In addition, influenza activity is still very high, and we want to encourage everyone to get the flu vaccine if they haven't done so already," Gounder said during the City Council's Public Safety Committee meeting.

Gounder said the city's Emergency Management Department has been in contact with other city agencies, urging them to let employees who are sick stay home and not potentially infect others.

RELATED: Flight attendant diagnosed with coronavirus after flights in and out of Los Angeles, reports say

There has only been one case of the coronavirus detected in Los Angeles County. That person has since been treated and cleared of the virus, but it stayed with the patient for 21 days, health officials said.

DPH officials said they've been reviewing the daily updates from the Centers for Disease Control and Prevention and responding to their instructions, as well as monitoring travelers coming from China, where the virus originated in the Hubei province.

Mayor Eric Garcetti told reporters earlier Wednesday that extensive precautions are being taken at Los Angeles International Airport to help prevent a spread of the virus, such as disinfecting various surfaces every hour.

A U.S citizen who recently returned from china is in quarantine at the naval base in Ventura County. And according to the CDC doctors who examined the man, he is not considered a coronavirus patient.

County health officials said they are holding conferences with city officials and medical professionals on a near-daily basis, and they are trying to obtain testing kits for local monitoring from the CDC. Those kits were supposed to arrive last week, but the outbreak has grown significantly worldwide since then, causing a delay.

The CDC has been issuing 14-day quarantines for people who have symptoms or may have been exposed to the virus.

COVID-19 was first reported as being transmitted from animals to humans, but the CDC confirmed last month that it can now be transferred from human to human.

Aram Sahakian, the general manager of the Los Angeles city's EmergencyManagement Department, said scientists have reported that when the virus made the "jump" from animals to humans, it started to evolve and became more resilient, "and it's probably still mutating."

"That's why there's no immediate hope for a vaccine in the nearest future," Sahakian said.

"Not to scare anybody, but those are the facts." He said regular treatment and care is the best they can provide in order to help infected people get better, adding that very young people, elderly people and those with certain health problems are most at risk for experiencing elevated symptoms of the virus.

When officials were asked what could trigger a county state of emergency regarding the virus, they said they were hesitant to immediately say.

The county issued a similar emergency declaration for the hepatitis A outbreak that spread among homeless people between 2016 and 2018.

"It is not tied to (whether we have) a certain number of cases to have an emergency," Sahakian said. "If the core group preparing for this incident sees the need for more resources, they can pull the trigger on it. It doesn't mean (the virus) is out of control."

San Francisco did so on Tuesday, and San Diego County declared an emergency earlier this month.

Gounder said there have been reports of some people being asymptomatic, meaning they contracted the virus but did not experience any of its symptoms, which can make the virus more difficult to detect.

Councilman David Ryu said he was concerned about the virus causing discrimination against select groups of people. "I wanted to make sure that we provide the proper information because there are some xenophobia (incidents) happening," Ryu said.

"I know you said they're only testing people from mainland China, but as we know, we have cases confirmed all throughout the world, so we want to make sure that this is not an opportunity for people to have hysteria, because we have professionals working on this."

Councilwoman Monica Rodriguez said she would like a report on available protective gear for fire or medical personnel to reduce their risk of exposure to the virus.

"Hopefully we're prepared for something that won't be an issue," Rodriguez said.

Los Angeles County Supervisor Kathryn Barger said she has authored a motion asking the board to request funding from the federal government to combat the coronavirus at its March 4 meeting.