LOS ANGELES - The City Council voted unanimously on Wednesday to put $100 million -- which was cut from the Los Angeles Police Department's budget earlier this year -- toward community programs in disenfranchised neighborhoods and communities of color.

"This year we saw a national and local call for change in our disenfranchised communities of color,'' Council President Nury Martinez said.

"We listened to our Black and brown communities as they asked for more resources, the same resources they see in affluent communities and are easy to
take for granted unless you've had to push a stroller through dirt in the dark,
unless you live in a garage and your kids rely on parks as their only play space.'' 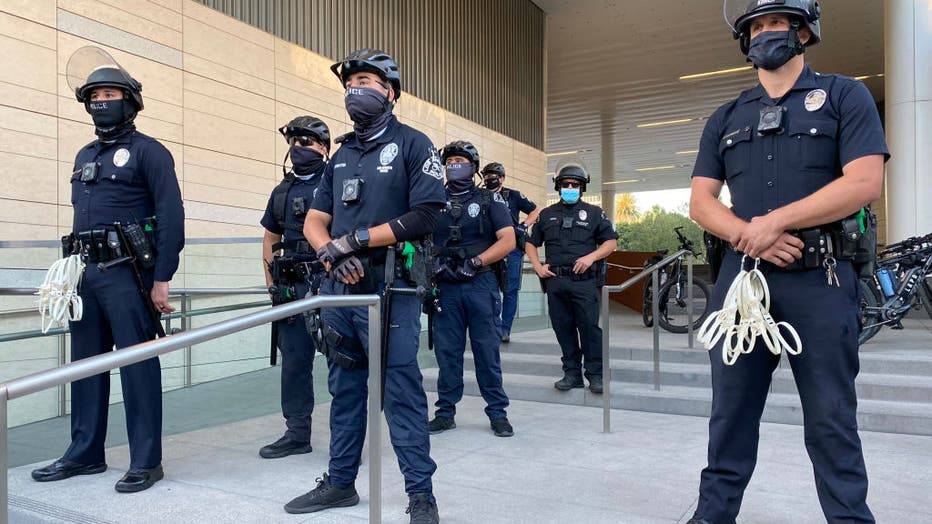 LOS ANGELES, CA - MAY 28: LAPD stands guard outside the Police Headquarters as demonstrators protest of the death of George Floyd, a black man who was in police custody in Minneapolis in Los Angeles on Thursday, May 28, 2020. (Photo by Keith Birmingh

Over the summer, amid protests related to the police killing of George Floyd in Minneapolis, the Los Angeles City Council approved a recommendation from Mayor Eric Garcetti to cut $150 million from the LAPD and forego a proposed increase to the police department's operating budget.

Of that money, $40 million has already been used to address Los Angeles' ballooning budget deficit amid the COVID-19 pandemic, and $10 million went to an unappropriated account.

Following the vote LA City Council President Nury Martinez wrote on Twitter “Wealthier districts may think sidewalks & street lights are frivolous requests when asking for investment, but basic services are what Black & Brown communities have to fight for. It's easy to take it for granted when you’ve never had to push a stroller through dirt in the dark.”