First Lady Jill Biden visited LA's own Homeboy Industries, a bakery tied to a nonprofit with a mission to rehabilitate former gang members.

LOS ANGELES - Jill Biden visited Homeboy Bakery and Homegirl Café in Chinatown for about a half-hour and spoke at a Democratic National Committee fundraiser for approximately 10 minutes Friday during her second trip to Los Angeles as first lady.

Homeboy Industries enrollee Johanna Carbajal told Biden she got pregnant at the age of 15, then attended community college, graduated from UCLA and will be going to law school.

Biden listened intently as senior staff member Eugene Walker told her about having been in prison and what Homeboy Industries has meant to him. He talked about how the organization builds relationships that are a big part of the organization's success.

Biden also asked the Rev. Greg Boyle, Homeboy Industries' founder, about how the organization got started.

Before the visit to Homeboy Bakery and Homegirl Café, Biden spoke for approximately 10 minutes at a Democratic National Committee luncheon fundraiser at the Hancock Park home of Marta Kauffman, a co-creator of the hit 1994-2004 NBC comedy "Friends."

Biden urged the approximately 18 people in attendance  to "work harder" to ensure that Democrats are elected to Congress, saying that with a "couple more partners in the House and in the Senate," the Biden administration could restore women's reproductive rights, protect Social Security, ban assault weapons, preserve marriage equality and make schools stronger.

Biden also visited Los Angeles in June, accompanying President Joe Biden at events at the Summit of the Americas and delivering the keynote address at Los Angeles City College's commencement. 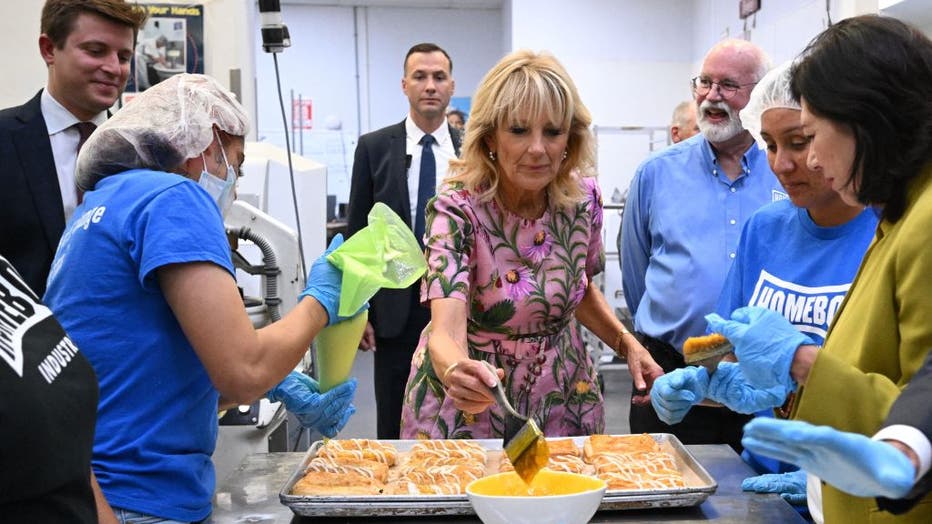 Homeboy Bakery and Homegirl Café are part of Homeboy Industries' on- the-job training and wraparound services, empowering individuals to enter the workforce within its rehabilitation and re-entry program.

Homeboy Industries bills itself as the world's largest gang rehabilitation and re-entry program, providing training and support to formerly gang-involved and previously incarcerated people, allowing them to redirect their lives and become contributing members of society.

Homegirl Café serves breakfast and lunch from 7 a.m.-2 p.m. weekdays. It seeks to create a safe space for its clients, particularly females, many of whom have experienced domestic violence and the challenges of single parenthood, in addition to the usual obstacles created by gang involvement and incarceration, according to its website.