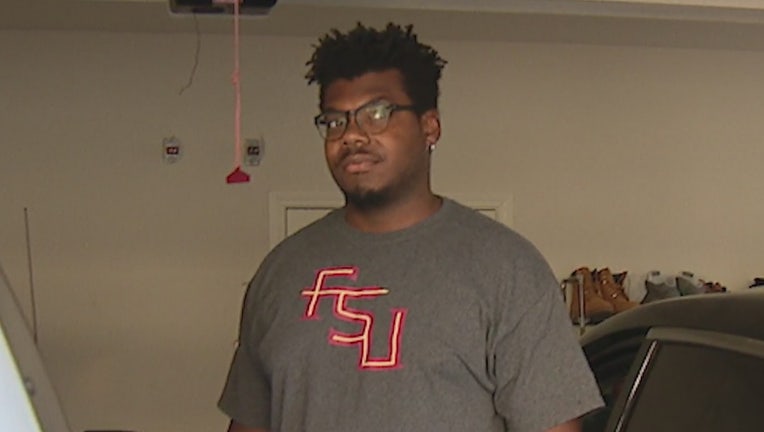 LOS ANGELES - FOX 11 is tracking down and confronting a Verizon employee accused of taking thousands of dollars in bribes to assist criminals known as “SIM Swappers”, who can leave their victims financially ruined.

FOX 11 is tracking down and confronting a Verizon employee accused of taking thousands of dollars in bribes to assist criminals known as “SIM Swappers”, who can leave their victims financially ruined.

A SIM swap is when a criminal is able to get a hold of the phone number and personal information of a victim, then calls the victim’s wireless carrier, impersonates them, and requests their phone number be transferred to a new SIM card they have in their possession.

If successful, the con artist has effectively taken over the phone number, and they can take advantage of the text based dual authentication checks that protective many of our sensitive accounts.

They can change passwords, lock the victim out of their own lives, and even empty out financial accounts, which is exactly what happened to Robert Ross on October 26, 2018.

“I took a million dollar loss,” he said. “My heart was pumping a lot, fear, deer in the headlights.” It began when Ross says his phone began showing notifications for a withdrawal request on one of his financial accounts, a request he never made.

Moments later, his phone displayed “no service” from AT&T, and his laptop showed his Gmail account suddenly logged out.“So between those three things together, I realized something was way off, and I was being hacked,” Ross said.

“I went to the Apple Store to figure out what was going on with his phone, and they called AT&T and determined there was an unauthorized SIM change in my account, and they got me a new SIM card and activated it, but by that time, all my money was already gone.

”One million dollars, an overwhelming majority of Ross’ life savings, and the money for his daughter’s education, was all gone in less than one hour, after the hacker converted it all to bitcoin, and withdrew it.“It’s like the wind getting knocked out of you, but your body doesn’t recover,” Ross said.

Ross’ case was immediately picked up by the REACT task force, an elite group of high tech law enforcement investigators based in northern California that specialize in prosecuting SIM swappers.

Within three weeks, they had analyzed AT&T cell tower pings in New York state and arrested 21-year-old Nicholas Truglia on numerous felony charges in relation to the hacking of Ross’s accounts.

Truglia had been enjoying a gaudy lifestyle, living in a luxury high rise in Manhattan, partying, and flying on private jets. He was extradited to California to face charges, where he’s pleaded not guilty, and his preliminary trial is set for October.“

He apparently did this to several other people, many other people,” Ross said. One of them was allegedly blockchain and cryptocurrency investor Michael Terpin.“So I’ve been SIM swapped twice,” Terpin said.

Terpin won a $75 million judgment against Truglia, who he sued for being involved in the 2018 SIM swap that stole $24 million from him in cryptocurrency.

Truglia had even allegedly posted a tweet stating that he had stolen $24 million.“On his phone preserved is the day of my hack him texting his dad and his best friend, I’m rich, I got $20 million and I just got 100 bitcoin, I’m not kidding, it was pretty smoking gun evidence,” Terpin said.

Terpin is also suing AT&T in federal court. He says after being SIM swapped in 2017, he upgraded to AT&T’s higher security and was still SIM swapped a second time in 2018.

His lawsuit claims AT&T employees are culpable, and the company needs to be held accountable.“We believe that they are as responsible as the criminals,” Terpin said.

Los Angeles TV journalist Elsa Ramon agrees.“I believe I was targeted,” Ramon said.Ramon told FOX 11 that after she was SIM swapped in April, she also demanded extra security from AT&T for her account.“I also had AT&T note on my account that SIM swaps are absolutely forbidden, and not allowed on my account unless I come into AT&T, physically come in, present my ID, and prove that it’s me,” she said.

But less than two months later, it happened again.“I picked up my phone and sure enough it said no service again,” Ramon said.

“They were back, I was SIM swapped again, and this time I was livid.”This time, the hacker got into Ramon’s messaging apps, and began threatening her cryptocurrency contacts to send two bitcoin, or else.“I took all the precautions, again all of my information is exposed, this attacker jumped through two layers of security protection on my accounts, and here we are again,” she said.

She launched into a twitter tirade against AT&T, calling them inept, and venting her frustration.“At this point, I felt it was an inside job,” Ramon said.All four major wireless carriers let customers add SIM swap security by setting a PIN code that has to be given in person or over the phone for account changes, but corrupt store employees can also have access to those PINS.

According to a federal criminal complaint filed in Michigan in May, obtained by FOX 11, three people, all employees of AT&T or Verizon, were all charged with wire fraud after they allegedly accepted bribes from a group of SIM swappers called “The Community” based in Michigan.

One of them was a southern California man named Fendley Joseph.According to his federal complaint, while working at a Murietta Verizon store, he accepted a $3,500 bribe from a SIM swapper to turn over “personal identifiable information” of Verizon customers, which resulted in the theft of $100,000 from a SIM swap victim.

FOX 11 tracked Joseph down in Murietta where he is out on bond.He said he wouldn’t talk about SIM swapping, and said he had no comment.

Joseph hasn’t entered a plea, and his next court date is set for October 3rd.“I am here to tell you that these are criminals we have never seen before,” said Erin West.

West serves as deputy district attorney in Santa Clara county. She works hand in hand with the REACT task force to hunt down and imprison SIM swappers. She’s currently prosecuting Nicholas Truglia’s criminal case, and she secured the first ever conviction of a SIM swapper this year.“

REACT arrested an early 20’s year old man in a rented house in the Hollywood Hills, he was a known SIM swapper and he was driving a $500,000 car he had bought with bitcoin,” West said.

His name is Joel Ortiz, he was convicted and sentenced to ten years behind bars for SIM swapping 40 victims and stealing $5 million from them. He’s now in San Quentin prison.“We are seeing people between the ages of 13 and 25 who are living in their mom’s basement, existing off of Uber Eats, never leaving their homes, and all of a sudden they’re instant millionaires,” West said.

“They are flagrant, they’re obnoxious, they have common things they do to show their wealth, they flaunt, everyone get s a diamond studded watch, everyone starts going to clubs drinking expensive champagne.”Following his million dollar loss, Robert Ross is now planning his own lawsuit against AT&T.“

I definitely think there are inside jobs being executed at AT&T and the other carriers,” he said.

And a judge recently ruled that Terpin’s lawsuit against AT&T can move forward.“We intend to win, we believe we have a very strong case,” he said.

While Ramon has a message for SIM swappers and those accused of helping them.“It’s not foolproof, and you guys are fools,” she said.

AT&T released the following statement to FOX 11 in response to this report:

“This is an industry issue, please contact CTIA for more information. Customers can learn how to help protect themselves here – https://about.att.com/pages/cyberaware/ni/blog/sim_swap.”