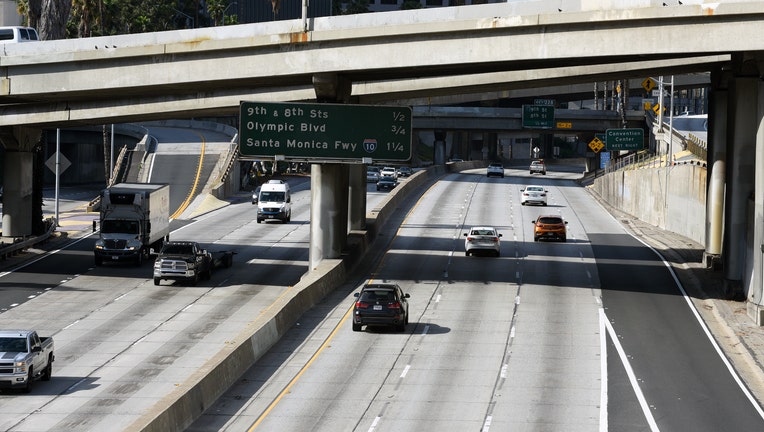 LOS ANGELES, CA - MARCH 20: View of extremely light, mid-morning freeway traffic in Downtown Los Angeles, the day after California Governor Gavin Newsom directed all Californians to stay at home and maintain safe distances from each other amid Corona

LOS ANGELES - California has never seen a weekend quite like this.

No sports practice for the kids. No dining out. No church services.

A little more than 24 hours after Gov. Gavin Newsom issued an unprecedented stay-at-home order to 40 million residents to help curb the coronavirus spread, most Californians were faced with how to spend two days of free time with strict limits on their freedom.

If Friday, the first day under the order, offered any clue, it may involve calling or texting friends and loved ones, or leaving the house to buy food or walk the dog: two exceptions to the lockdown.

Alexis Tirado said she’s come to depend on the companionship of Sunnie, the one-eyed bulldog she adopted last weekend.

“She’s been the silver lining for me this whole time,” Tirado said as she walked the pooch in Los Angeles.

A few families with young children broke the monotony of their new existence by going to a playground at Berkeley’s Shorebird Park on Friday. They kept distance from one another by negotiating who wanted to occupy a swing set or climbing structure.

“Each day gets better and better as we try to figure out curriculum for the kids,” Eileen Marshall said about working from home with her son, a first grader, and daughter, who’s in preschool.

“For our sanity we go on nature walks and we try to incorporate science in everything we do,” she said. “We just take it a day at a time and a week at a time. We don’t even know how long this will last. ... As we travel through this with other parents, we’re just trying to figure out what’s our new normal.”

The governor’s effort to curb the pandemic in the nation’s most populous state was by far the most sweeping and was followed Friday by similar announcements in New York and Illinois.

California is one of the hardest-hit states, with 1,185 confirmed cases and 23 deaths as of Friday.

Los Angeles County Health Director Barbara Ferrer urged people to stay home and only go out for essential needs. Those who have been tested and come back negative shouldn’t have a false sense of security.

“You can be negative today and positive tomorrow,” she said. “Stay home as much as possible. You are safer at home.”

On Friday, Newsom issued an executive order requiring mail-in ballots be issued to voters for three April and May special elections and extending the deadlines for certifying the results from March primary elections.

Newsom has said infection rates of the COVID-19 virus are doubling every four days in some areas and projected that 56% of the state’s population — about 22 million people — could contract the virus in the next two months if aggressive prevention isn’t taken.

Residents have been told to stay 6 feet (1.8 meters) away from others, not gather in groups and wash their hands frequently. They can go out to get food, fill prescriptions, seek medical care, care for vulnerable relatives or neighbors and get some exercise, such as walking.

Dozens of surfers bobbed in the waters off Huntington Beach, dubbed Surf City USA, where sets of waist-high waves rolled in. But on the beach business was a bummer for Jason Murchison, whose surf lesson business had tanked during a time of year when it usually picks up for spring break.

“Everyone is terrified to come out,” he said. “Surfing is one of those sports where if you want to talk about social distancing and all that, it’s the ideal sport to do that.”

In general, people seemed to be heeding state and local orders to stay home as much as possible. Normally congested freeways in California were truly free — of traffic — and city streets remained mostly empty in areas usually bustling with cars, bikes, scooters and commuters emerging from rail stations and stopping at coffee shops and bakeries. Yosemite National Park closed to visitors Friday, the latest of California’s top tourist destinations to do so.

Most retail businesses and virtually all schools were closed and those that could were having employees work from home. Gas stations, supermarkets and convenience stores were open along with auto repair shops and those providing essential services, such as plumbers and electricians, were still on the job. But restaurants were only delivering or providing take-out.

“It’s thinning out by the day,” he said. “Hundreds and hundreds of employees are being laid off by the hour.”

At the same time, people were sweeping grocery store shelves bare despite government pleas that hoarding was unnecessary because there were no shortages. Toilet paper was universally in short supply.

Retiree Cathy McGinnis spent the morning with her adult daughter outside a Walgreens in the Northern California community of Plumas Lake waiting — and hoping — to buy toilet paper. She had been searching for the in-demand item for five days and had counted 40 rolls through the window.

A bigger challenge, though, was keeping the requisite distance from her daughter.

The governor has activated the California National Guard to help with humanitarian aid. On Friday, Newsom announced that guard members would provide short-term help in distributing food at food banks, whose volunteer base has declined during the crisis while the need for them has soared because many people are losing work.

Newsom said he expected social pressure — not policing — to help enforce his stay-at-home order. But officers in San Jose were prepared to crack down on dozens of businesses that remained open in violation of the order, Chief Eddie Garcia said.

Authorities were looking into releasing non-violent inmates from jails to prevent the spread of COVID-19 in close confinement. The state prison system reported its first two cases among employees at different institutions, but no inmate has yet contracted it, state corrections spokeswoman Dana Simas said.

For most people, COVID-19 causes only mild or moderate symptoms, such as fever and cough. It can cause more severe illness, including pneumonia, for some people, especially older adults and those with existing health problems. The vast majority of people recover.

Isaac Stevens works for a Sacramento law firm that represents police and fire unions and his office was open. The lawyers were helping the unions negotiate policies related to the new coronavirus.

Stevens took a break from the office on Friday morning by walking around the neighborhood in his slacks, tie and sneakers.

Alison Steffensen, a psychologist, had a makeshift office in her Sacramento front yard, with one laptop propped on the foot rest of a lawn chair and another in her lap.

“Every time I wake up in the morning I think that life is kind of normal, then I realize, ‘Oh, this is the strangest thing that’s ever happened in my lifetime and I don’t know when it’s going to end,’” she said.

Thomas Grey, a computer network administrator, has been working from home in a small apartment in San Francisco’s trendy Hayes Valley neighborhood but on the fourth day of self-isolation he decided to take a video conference call from a nearby park.

Grey, 49, said being isolated has been difficult and he was looking forward to seeing his colleagues’ faces.

“We were already isolated with our phones and computers, but this is the most intense level of isolation,” Grey said.

Grey said he had reached out to his neighbor from across the hall after eight months of living in the building. The two have been keeping tabs on each other by text message and on Thursday went to a store together.

Grey said he worries about the impacts the prolonged isolation could have on everyone’s mental health, including the homeless.

“I can already see the people living on the streets getting more aggressive, more desperate,” he said. “There is no one for them to talk to, or give them a dollar.”

California’s homeless population was a serious concern because of their lack of shelter and the fact that many had underlying medical problems that made them more vulnerable to the virus. Los Angeles was waging a crash program to set up thousands of emergency beds in its recreation centers.

But on Friday, the streets of Skid Row were packed. People wedged together with their hands outstretched as someone unloaded a van of produce, juice and pre-packaged food. Tents were erected side-by-side and people wandered in and out of them to chat.

Some people were juggling jobs and home life, especially since virtually all California schools have closed their classrooms and switched to online or other “distance” learning for students, who are essentially stuck at home.

Shantrice Hall, 44, works for a major pharmaceutical chain in the Sacramento area, and business has been booming during the pandemic. But she’s worried about her 11-year-old son. He has been falling behind in school and with schools closed, the teacher has been contacting Hall about continuing classes online. But Hall said she doesn’t have a computer.

She does what she can at home, helping him memorize multiplication tables.

“But that’s hard,” she said. “I’ve got to get off here and go and be parent and teacher at home.” 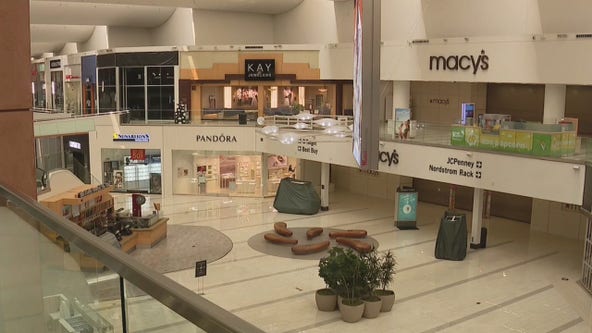 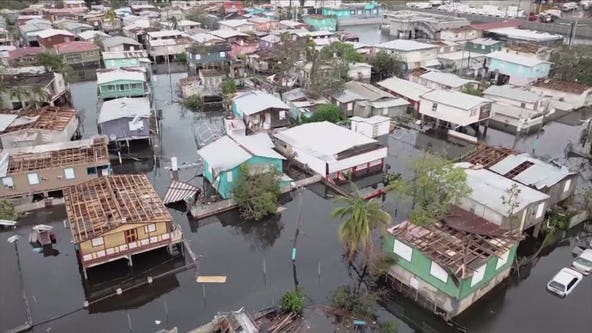 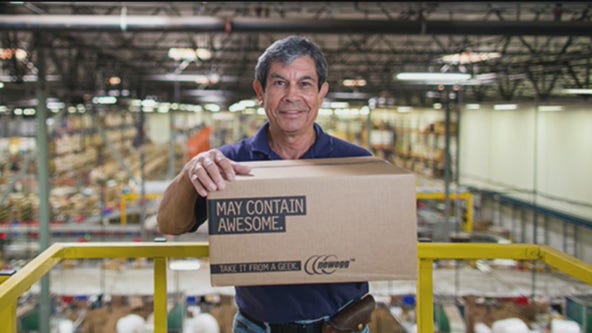