A family who can no longer live at their South Los Angeles home describes the nightmare that comes with being displaced after a horrific incident.

LAPD said the explosion was the result of a catastrophic failure in what was supposed to be a blast-resistant container used by bomb squads worldwide. Bomb technicians placed 10 pounds of homemade fireworks that were seized from someone’s home inside the container, along with 5,000 pounds of what are considered over-the-counter fireworks. However, the over-the-counter fireworks contained a powder that LAPD said made them too dangerous to transport.

Before the explosion happened, Jose Becerra said nine of his family members were inside of their house when police knocked on their door.

"At nine in the morning, I see some car patrols at my house and at around ten, there are more patrols coming from several directions. At 10:30 a.m., one officer came to our house, he knocked and said they found some illegal fireworks at a neighbor's house," said Jose Becerra.

Becerra said the officer advised them to stay indoors while they detonate the fireworks. Becerra said of the nine people inside of the house – two are disabled and one is elderly – so they believed it would be best to stay there.

"Because he [the officer] said it was going to be safe for us, we said OK, we're going to stay here," he said.

Becerra said when the fireworks detonated, the explosion caught them off guard.

"Somebody screamed. When we turned our heads to the window, there was an explosion. I see my wife flying. There's glass everywhere. My family is screaming. I can't hear anything because the explosion was big and I see my wife on the floor with a lot of blood," said Becerra. 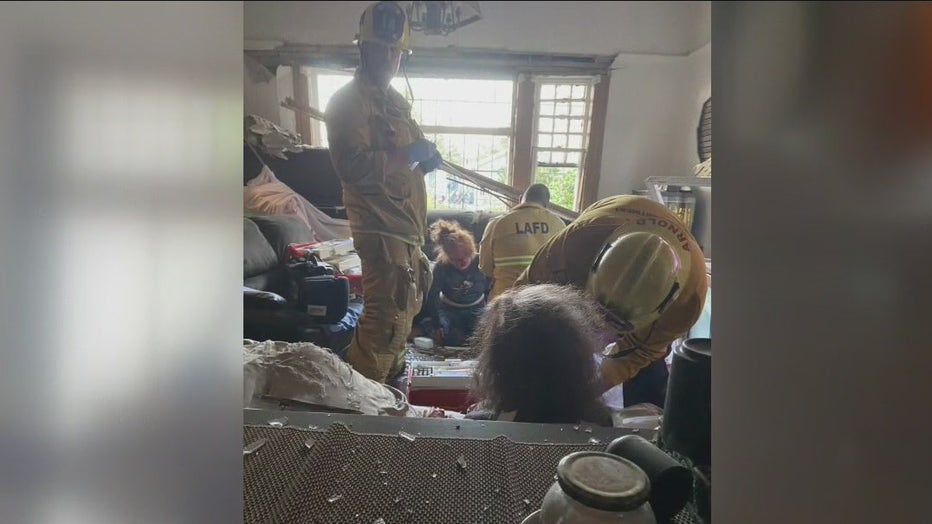 Five of the nine family members were injured, including Becerra's two aunts [one is 85 with dementia], his uncle, his wife and himself.

Becerra was released from the hospital at around 3 a.m. Becerra said the explosion has hurt them financially.

Becerra describes the emotional toll the explosion has taken on his family.

"It was really a nightmare. Everything changed. I see my daughters crying all night. I see my wife crying in silence. My future is dark. I protect my family all the time and suddenly I'm not able to do it, not emotionally, not physically, not financially," he said.

Becerra said police allowed him to re-enter their home to retrieve laptops, medical records and medicine but they cannot live there anymore.

Becerra said an LAPD officer called him Sunday telling him they also had to have their two cars towed that was parked in front of their home.

Becerra is asking for accountability following the explosion.

"I don't want to blame anyone, but somebody has to take responsibility for what happened. That's the only thing that I want," he said.

The family said their lawyer has created a GoFundMe page to help with expenses.

Seventeen people were hurt, including nine LAPD officers, an ATF agent, a television news photographer and several residents. The ages of the victims range from their 40s to their 80s, officials said.