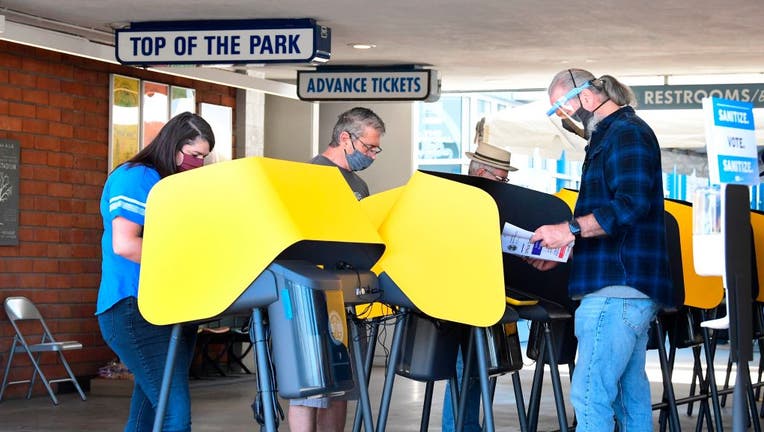 LOS ANGELES - The Justice Department on Monday announced its plans for voting rights monitoring in Los Angeles and Orange counties and throughout the country for Tuesday's general election.

The department historically has monitored in jurisdictions in the field on Election Day and is again doing so this year.

The department will also take complaints from the public nationwide regarding possible violations of the federal voting rights laws through its call center.

"Our federal laws protect the right of all American citizens to vote without suffering discrimination, intimidation, and harassment. The work of the Civil Rights Division around each federal general election is a continuation of its historical mission to ensure that all of our citizens can freely exercise this most fundamental American right."

On Tuesday, the Civil Rights Division plans to send personnel to 44 jurisdictions -- including Orange and Los Angeles counties -- in 18 states to monitor for compliance with the federal voting rights laws.

RELATED: LA County vote centers to be monitored for compliance with Americans with Disabilities Act

As in past years, monitors will focus on compliance with the Voting Rights Act, and the other federal voting rights laws enforced by the division.

On Election Day, Civil Rights Division personnel will be available all day to receive complaints from the public related to possible violations of the federal voting rights laws by a complaint form on the department's website: civilrights.justice.gov/ or by telephone toll-free at 800-253-3931.

Complaints related to disruption at a polling place should always be reported immediately to local election officials -- including officials in the polling place.

Complaints related to violence, threats of violence or intimidation at a polling place should be reported immediately to local police authorities by calling 911.

These complaints should also be reported to the department after local authorities have been contacted.

Last week, the Justice Department announced its overall plans for the general election to protect the right to vote and secure the integrity of the voting process through the work of the Civil Rights Division, Criminal Division, National Security Division, and U.S. Attorney's Offices.

More information about the federal civil rights laws is available on the Civil Rights Division's website at justice.gov/crt.