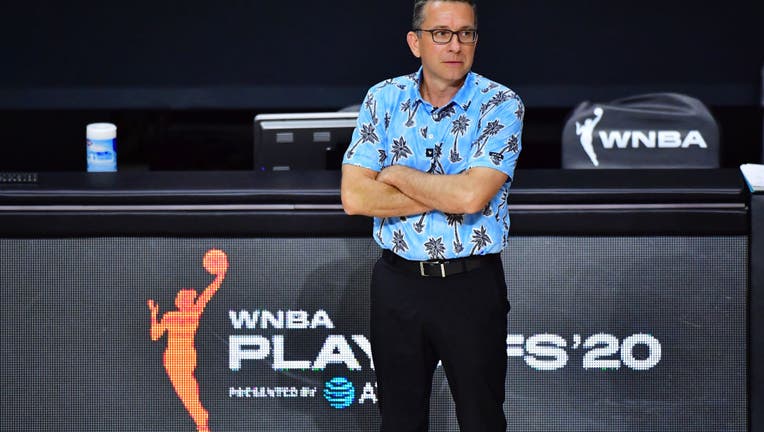 LOS ANGELES - The WNBA's Los Angeles Sparks has named Curt Miller as the team's new head coach, replacing Derek Fisher, who was fired as coach and general manager in June with the team struggling.

Miller spent the past seven seasons as head coach of the Connecticut Sun, compiling a regular-season record of 140-86. He was general manager for six of those seasons with the Sun.

Friday's hiring brings Miller back to Los Angeles, where he was an assistant coach for the Sparks in 2015 under head coach Brian Agler.

"The Sparks are thrilled to name Curt Miller our head coach," Managing Partner Eric Holoman said in a statement released by the team. "After conducting a thorough search, we are confident that Curt is the right person to lead the next era of Sparks basketball."

Miller's 61.9% winning percentage places him fifth in WNBA history in that statistical category, and his 140 regular-season wins rank 11th all-time. In six postseason tournaments with the Sun, he led his team to 16 victories -- 11th on the all-time playoff wins list.

"Curt brings extensive experience as a WNBA head coach, where he has won at a historic pace and helped develop several All-WNBA and MVP-level players," Holoman said. "His teams play with an intensity and attention to detail our players will embrace, and a passion our fans will appreciate."

"I want to thank Eric Holoman and the entire Sparks ownership group for the opportunity to coach one of the iconic teams in women's professional sports," Miller said. "The Los Angeles Sparks have a history of winning championships in front of one of the most passionate fan bases in sports, and it's an honor to be named Sparks head coach."

The Sparks started the 2022 season with a 5-7 record before firing Fisher on June 7 and naming assistant coach Fred Williams as interim head coach. They finished 13-23 — 11th in the 12-team league.

A rebuilding process is ahead for the new coach.

"I'm ready to work alongside our owners, players and entire organization to help build a team that will compete for WNBA championships and make our fans and partners proud," Miller said. "It's a privilege to hold this position, and I'm committed to adding to the incredible basketball legacy of this city and franchise."

The Sparks have not yet named a new general manager to take over those aspects of Fisher's former role.