Crews removed 35.7 tons of solid waste from Echo Park Lake since the park was closed in March when the city cleared out a large homeless encampment.

LOS ANGELES - Los Angeles Sanitation and Environment crews removed 35.7 tons of solid waste from Echo Park Lake since the park's closure on March 25, and a news report Thursday indicated that the park could reopen by the end of the month.

The project to clean up and repair the park cost $600,000, according to a Board of Recreation and Park Commissioners report issued before the park's closure.

"We process everything as if it were the individuals' only possessions," said Jose Pepe Garcia, Los Angeles Sanitation's assistant director. 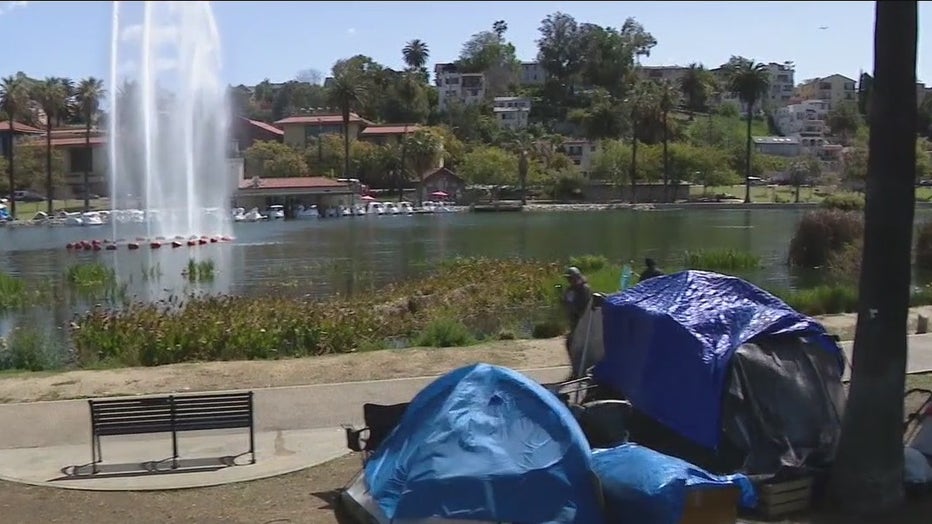 "I couldn't believe it," said Echo Park resident Riley Montgomery in response to reports of crews getting rid of more than 700 pounds of human waste. "It's terrifying and horrifying."

The park could reopen by the end of the month, a Los Angeles Department of Recreation and Parks told The Times.

A spokesperson for Streetwatch LA, an advocate group for those battling homelessness, called those numbers a lie.

The spokesperson issued a statement that said, in part, "They speak to the amount of urine and fecal matter discovered on sight, but have never allowed people to have public, regularly accessible/working restrooms."

Word spread on March 22 that the park would be closed for repairs, but many in the community saw it as a veiled effort to remove the hundreds of unhoused Angelenos that took up residency in the park during the COVID-19 pandemic. The move was met with large protests, in which officers arrested 182 people.

Protesters blasted the city for forcing the park's residents out of an area that had grown into a supportive community -- including a vegetable garden, working showers and a shared kitchen.

Councilman Mitch O'Farrell and Mayor Eric Garcetti declared the operation a success, citing that the park's residents were offered housing.

Police are starting to make arrests after they ordered protesters in Echo Park to disperse earlier in the night.

However, opponents of the park's clearing, including a coalition of faculty at USC, UCLA, UC Irvine and Occidental College, pointed out that most of the housing options were temporary and some were in congregate shelters amid a pandemic.

"First, placements into interim shelter must not be equated with housing people," the faculty stated in a letter to the city. "Without a clear path to permanent housing, such temporary housing serves as yet one more stop in the endless cycle of displacement. Many of the Echo Park Lake placements were made to Project Roomkey hotels and motels, in locations as distant as Palmdale."

They added that some Project Roomkey residents claim they live under strict curfews and prison-like conditions while living in the city-provided hotels, and they feel like they have to "trade their autonomy and dignity for a bed."

The American Civil Liberties Union criticized the LAPD's role in the clearing and response to protesters, which included detaining legal observers and journalists covering the protests.

"Taking militarized police action to displace people who are already displaced is cruel and does nothing to bolster public safety. Mass arrests of protesters, legal observers and journalists will not keep the city's brutal, ill-conceived actions from being known. The city leaders who approved this approach should be held accountable," the ACLU said after the protests.

The police response also prompted the City Council Wednesday to request a report from the LAPD on its detention of journalists during the demonstrations and the department's broader conduct toward the media.

The task of cleaning up what was left behind involved tagging and storing any personal belongings.