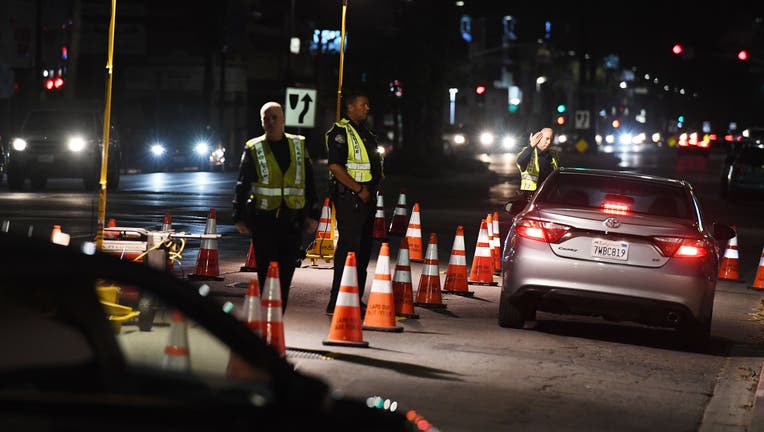 LOS ANGELES - With impaired driving customarily reaching one of its high points of the year on Super Bowl Sunday, various law enforcement
agencies will increase patrols in Los Angeles County.

The California Highway Patrol will have what Commissioner Warren Stanley called a full team of officers statewide ready to intercept dangerous drivers. In addition to stopping impaired drivers, they will also be watching for seat belt usage, speeding and distracted driving, Stanley said.

"Driving impaired is completely preventable,'' Stanley said. "Lives are on the line. Not only are innocent people at risk, impaired drivers stand to lose money, their freedom, their license, and their vehicle.''

Three people died in alcohol-involved collisions in California on Super Bowl Sunday in 2019.  Another 140 people were injured, according to preliminary CHP data. The CHP made 187 DUI arrests that day. The Automobile Club of Southern California estimates that a first-
offense misdemeanor DUI conviction in California can cost more than $21,000 in fines, penalties, restitution, legal fees and increased insurance costs, and that cost is more than $22,000 if the person convicted is underage.

"Marijuana use can also inhibit concentration, slow reaction times and cloud judgment. If you've used marijuana don't drive and if you plan to drive don't use marijuana.''

-- Ask all guests to designate a sober driver in advance;
-- Keep phone numbers for sober ride services handy;
-- Take car keys from partygoers as they arrive and don't let them
drive impaired;
-- Serve food and non-alcoholic drinks and water;
-- Serve protein-rich and starchy foods to slow alcohol absorption;
-- Do not serve alcohol or cannabis to anyone under age 21 because it
is illegal;
-- Stop serving alcohol in the third quarter and serve coffee and
dessert instead;
-- Allow guests to stay overnight, if possible; and

The Automobile Club of Southern California suggests party guests or patrons watching the Super Bowl at restaurants and bars:

-- Designate a sober driver in advance if attending a Super Bowl party;
-- Keep a sober ride service app or telephone number in your cellphone
or wallet so you can arrange for a ride home;
-- Avoid drinking too much alcohol too quickly. Eat food and drink water during the party;
-- Call a sober friend or family member for a ride if you've been drinking, or, if possible, stay where you are for the night;
-- Never ride as a passenger in a car driven by someone who has been consuming marijuana or drinking alcohol, even after just one drink;
-- Do not consume alcohol or marijuana if you are under 21. It is against the law;
-- Buckle your seat belt each time you drive;

If you encounter an impaired driver on the road, keep a safe distance and ask a passenger to call 911 or pull over to a safe location to
make the call yourself.