Los Angeles County Sheriff Alex Villanueva is doubling down on accusing Nicholas Gutierrez of intentionally hitting a group of law-enforcement recruits in the Whittier area.

WHITTIER, Calif. - The saga involving the 22-year-old driver accused of plowing into 25 law enforcement recruits from various agencies across Los Angeles County with a Honda CR-V while driving the wrong way in Whittier continues to take bizarre turns.

The Los Angeles County Sheriff's Department confirmed Nicholas Joseph Gutierrez is back on the streets after being released from custody just before 10 p.m. Thursday. The announcement comes hours after Gutierrez was taken into custody and arrested for the attempted murder of peace officer(s) and may have been under the influence of a recreational drug when the crash occurred.

Jail records cite a California law that authorizes police to release someone from custody without first being arraigned if there are insufficient grounds to make a complaint. Therefore, investigators are not legally allowed to hold a suspect for more than 48 hours without presenting a case to the District Attorney's office.

According to LA County Sheriff Alex Villanueva, the investigations left authorities believing that the crash was intentional.

"They did a thorough investigation. They interviewed dozens and dozens of witnesses and victims," Villanueva said, regarding the crash believed to be done intentionally. "That was the conclusion."

The suspect was identified as Nicolas Joseph Gutierrez of Diamond Bar and his bail was set at $2 million.

"The fact that he accelerated towards the group, that's what the group was saying, no effort in breaking, not even on first contact a reaction, there was no skid marks, nothing. His statements after he showed no regret or remote o arno normal reaction of  human being," stated Villanueva.

In spite of Villanueva's conclusion, LASD – who is working with the California Highway Patrol on the investigations – said the "extreme complexity" of the investigation left authorities needing to get more evidence, thus releasing the 22-year-old suspect.

Gutierrez, who lives in Diamond Bar, may face additional charges and was scheduled to appear in court on Friday.

The California Highway Patrol said the collision was reported at 6:25 a.m. Wednesday near the intersection of Mills Avenue and Telegraph Road. CHP Capt. Charlie Sampson said the driver was going southbound on Mills Avenue when he veered into the opposing lanes and struck the victims going northbound while out on a morning training run.

The members of Academy Class 464 attend the Sheriff’s Training Academy and Regional Services (STARS) Center located in the 11500 block of Colima Road, roughly a mile and a half from the crash site.

Gutierrez suffered minor injuries in the horrific collision and was hospitalized. He underwent a sobriety test at the scene and Villanueva later confirmed he passed the breathalyzer test. Toxicology reports could take weeks to come in. The sheriff did confirm marijuana was found in the car. 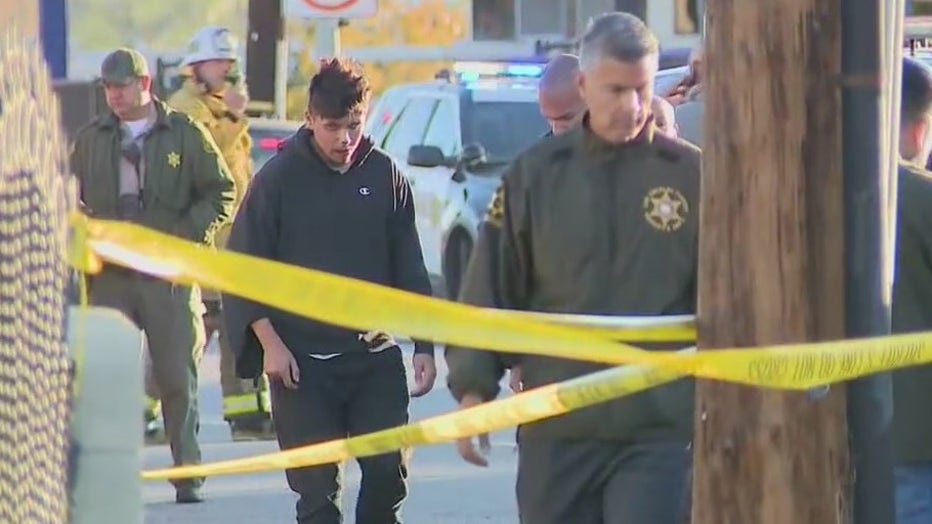 RELATED: What we know about the California driver who hit 25 law enforcement recruits in LA County

His attorney released the following statement, "Nicholas comes from a proud law enforcement family and the injuries to these recruits is beyond heartbreaking. The Gutierrez family appreciates the Sheriff’s Department taking the time to conduct a full and complete investigation. As many have asked, we want to emphasize that Nicholas was on his way to work, and had no drugs or alcohol in his system at the time of this tragic accident."

A video taken from the scene shows the moments the cadets were hit, leaving 25 injured. Sixteen recruits suffered minor injuries, four had moderate injuries, and five were critically injured.

Surveillance video shows the moments the wrong-way SUV driver runs into a group of law-enforcement recruits representing Southern California departments. WARNING: The video is graphic and is not suitable for all viewers.

The names of the victims have not been released and Villanueva said some of them face a long road to recovery.

County Supervisor Janice Hahn released a statement saying in part, "This has been a tragedy on so many levels. LA County has been making a concerted effort to recruit new deputies to the Sheriff’s Department. These brave men and women answered our call and I am heartsick that their willingness to step up put them in harm’s way."

Los Angeles County Sheriff Alex Villanueva said he's visited with many of the cadets injured in a crash during a training run, and that many have a long road to recovery.

RELATED: How you can help California law enforcement recruits from the LA County crash

Anyone who is able to provide additional information or witnessed the crash is asked to contact the LASD's Homicide Bureau at 323-890-5500.