President Joe Biden paid a visit to a Metro subway construction site in West Los Angeles Thursday, touting federal investments in the nation's infrastructure and saying the dollars will support projects across the Southland, including transit improvements for LAX and the ports.

LOS ANGELES - President Joe Biden paid a visit to a Metro subway construction site in West Los Angeles Thursday, touting federal investments in the nation's infrastructure and saying the dollars will support projects across the Southland, including transit improvements for LAX and the ports.

"Every year, people take more than 22 million rides on your subways, your light rail and your buses," Biden told the crowd of dignitaries and workers. "It's how so many people get to work school and how tourists and locals explore this world-class city. But the transit system needs an upgrade, badly. You know that. You need to connect more neighborhoods, ease traffic congestion, air pollution, make it easier for people to get around to where they need to go.

Biden touted the project as dramatically cutting the time it will take to travel from downtown to West Los Angeles, adding more than 80,000 daily riders to the Metro system while taking 27,000 cars off the roads. He also said it would result in 124,000 fewer tons of carbon dioxide from being released into the air, and would save 14 million gallons of gas.

He pointed to ongoing renovations to the terminal area at Los Angeles International Airport and an eventual rail connection. He also said improvements are being made to improve the movement of cargo in and out of the Los Angeles-Long Beach port complex. 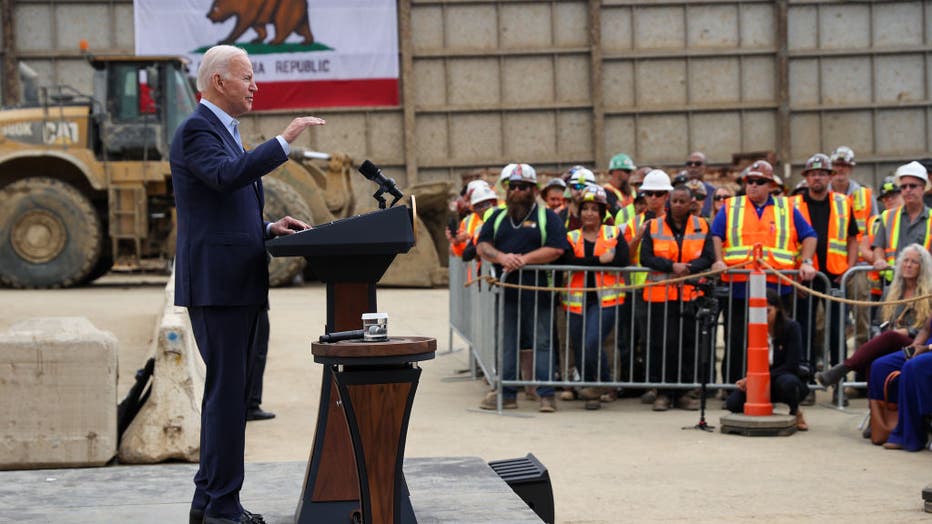 "We're building a new four-lane road to the Port of Los Angeles to make it easier for the trucks to drive up to the container terminal, load up their goods for transport," he said. "And the port of Long Beach, one of the busiest container ports in the nation, we're going to deepen the channel so ships can move in and out of the harbor faster."

RELATED: How traffic will be impacted as president visits West LA, Orange County

Biden also talked about efforts to rebuild bridges and other transportation infrastructure across the state, along with ensuring access to the internet in low-income neighborhoods and bolstering water delivery systems.

"It's been a rough four or five years for the country. ... but there's bright spots where America's reasserting itself," he said. "Like here, where the best workers in the world are hard at work building a better future for all of us. ... We just have to keep it going, and I know we can. I know we can. I've never been more optimistic about America's future, particularly relative to the rest of the world. We're in a better position than any nation in the world, and every other nation that I'm aware of is aware of it.

"... We just have to remember who we are. We are the United States of America, and there's nothing, nothing that's beyond our capacity, nothing, when we decide we're going to do it together."

After his roughly 20-minute speech, Biden shook hands with attendees and posed for photos. Among the other dignitaries on hand were Mayor Eric Garcetti, Sen. Alex Padilla, D-California, and Reps. Ted Lieu, Brad Sherman, Maxine Waters and Nanette Barragan.

Also in attendance was Rep. Karen Bass, D-Los Angeles, and a mayoral candidate -- who clearly has Biden's backing in her upcoming runoff election against businessman Rick Caruso.

Biden referred to her as the "soon-to-be" mayor as he began his remarks.

After greeting some attendees, Biden got back into his motorcade for the trip back to his hotel in Westwood, but the caravan made an unannounced stop at Mexican restaurant called Tacos 1986 on Kinross Avenue.

Biden stops for tacos in LA

President Joe Biden on Thursday made a stop at Tacos 1986 in LA's Westwood neighborhood for lunch, alongside Rep. Karen Bass and LA County Supervisor Hilda Solis.

Biden interacted with workers and said he was placing a "takeout order for Bass." When he took out cash to pay for the food he ordered, a worker told him he would get a 50% "public service" discount. Biden gave the cashier $60 and told him to give the next customer a free meal. Biden's food bill was $16.45 -- covering two quesadillas and six tacos.

Biden arrived at LAX just before 5 p.m. Wednesday, and was greeted by Bass, Garcetti and Padilla.

People can expect the westside to be busy Thursday morning.

The president is scheduled to attend a Democratic Congressional Campaign Committee fundraiser later Thursday. Early Friday afternoon, he will fly from Santa Monica Airport to John Wayne Airport in Orange County, ahead of a 3 p.m. gathering at Irvine Valley Community College, where he will discuss "lowering costs for American families," according to the White House.

Immediately after that appearance, he will return to John Wayne Airport and depart for Portland, Oregon.

The California Republican Party chided Biden's visit, calling the state an "odd choice" for the president to choose "as a backdrop for bragging about his failed policies," noting the national-high cost of gas, rising crime and homelessness.

"If President Biden is looking for a sympathetic audience to high-five him for a job well done, he's come to the wrong state," state Republican Party Chair Jessica Millan Patterson said in a statement. "Californians are suffering under the reckless policies of Joe Biden and the California Democrats who enable his failed agenda. Make no mistake -- the path to the House majority runs straight through our state, and California voters will ensure that Republicans are put in charge to turn our country around from the mess that Democrats have made."

According to Deadline, the Thursday evening DCCC fundraiser will be in Brentwood and will feature an appearance by House Speaker Nancy Pelosi. It was unclear who is hosting the event.

Deadline reported that tickets for the event start at $5,000 per person, ranging up to $50,000 for a couple to be labeled as "hosts," which also includes a photo op and attendance at a reception.

Biden was last in Los Angeles in June, serving as a host of the Summit of the Americas. He also spoke at two Democratic National Committee fundraisers during that visit.

"President Biden visiting California means he knows what Republicans have known for months: Democrats are in trouble," said Hallie Balch of the Republican National Committee. "From sky-high gas prices to rising crime, California Democrats have hitched their wagons to the wrong agenda. Californians are tired of the Biden agenda and the many consequences it has brought to the Golden State."

As is typical with presidential visits, motorists should anticipate rolling road and freeway closures as Biden is driven around the area. Biden's exact travel routes are never released for security reasons.