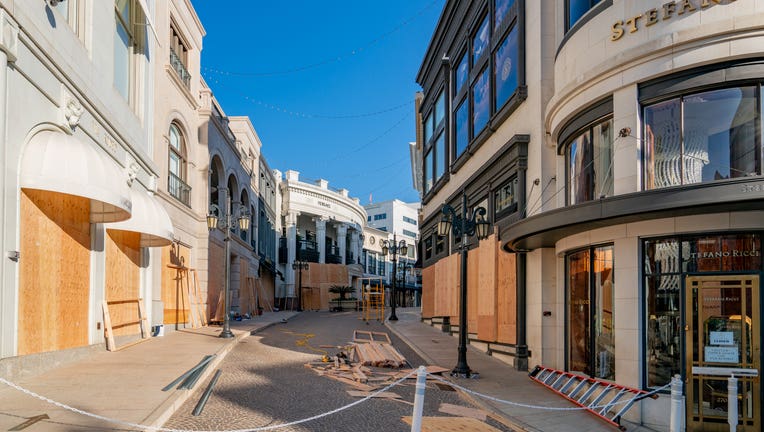 General views of the stores on Via Rodeo on Rodeo Drive boarded up as a precautionary measure in preparation for the 2020 Presidential Election on November 3rd on November 02, 2020 in Beverly Hills, California. (Photo by AaronP/Bauer-Griffin/GC Image

At least 80 armed security guards will help the department by providing extra protection in upscale residential and business areas.

Law enforcement agencies in the Los Angeles area have been attempting to strike a balance on Election Day, ramping up their prescence amid fears of civil unrest, while assuring the public that officers at polling places are there to protect the election process, not intimate voters.

The normally bustling Rodeo Drive remained empty early Tuesday, after police before midnight implemented a hard road closure, installing cement barriers at key intersections, and banning both cars and pedestrian traffic through most streets in the area.

In the suburb of Bellevue, police spokeswoman Meeghan Black said officials have not heard about any planned protests but have “staffed up” to make sure officers are available if needed.

Some businesses in Seattle and Bellevue have boarded up windows to avoid damage.

Law enforcement agencies in Washington state’s larger cities were prepared Tuesday to respond to unrest during the election while police misconduct investigators warned that they’ll be watching the officers to make sure they handle protesters appropriately.

The Office of Police Accountability said its investigators and supervisors are on-call and ready to respond to potential misconduct and complaints. They encouraged the Seattle Police Department “to allow demonstrators to freely exercise their First Amendment rights.”

The office said that includes “not creating unnecessary barricades or arbitrarily restricting movement.”

Thousands of demonstrators have held marches and rallies in Seattle and Bellevue this year. While most gatherings were peaceful, the events sometimes turned violent with looting, rock throwing, window breaking and clashes with officers.

The Office of Police Accountability has received more than 19,000 complaints about police misconduct during demonstrations. So far they’ve completed investigations in a handful of cases and found that at least three officers used excessive force while arresting suspects.

As is the case in many U.S. cities, many businesses across Los Angeles and in Beverly Hills were boarded up prior to Election Day. Residents or business owners in Beverly Hills who planned to hire their own private security were instructed to register online with the police department.