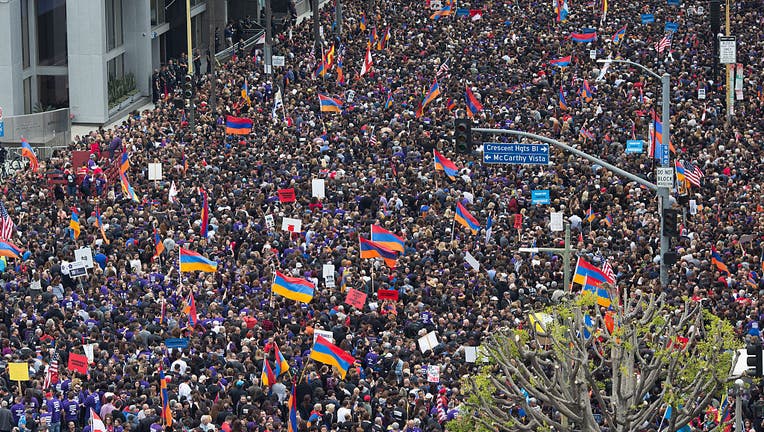 LOS ANGELES - Every year on April 24, hundreds of thousands of Armenian-Americans and supporters rally throughout Los Angeles and around the world to bring awareness and attention to the Armenian Genocide.

In 1915, 1.5 million Armenians were killed at the hands of the Ottoman Empire, which is now modern Turkey. Since then Turkey has denied their actions of committing genocide, and it wasn't until 2021 that President Joe Biden became the first US president to formally recognize the genocide.

His recognition came on the heels of an intense war between Armenia and Azerbaijan over the territory of Nagorno-Karabakh, also known as Artsakh.

The community says the purpose of the annual protests are to bring awareness and demand recognition. Even though the US government has recognized the genocide, this year the Armenian-American community is calling on Biden to "match his words with actions, and take tangible steps to hold Turkey and Azerbaijan accountable for their ongoing aggression against the Armenian people nearly two years on from the invasion of Nagorno-Karabakh."

"We will still be marching in front of the Turkish Consulate; we are still calling on the Turkish government to accept responsibility for the genocide and pay reparations and deliver some justice to the Armenia people. There failure to do so and refusal to do so this far to accept that responsibility and their ongoing denial campaign in that regard is just further reason for us to continue our struggle and march each year and year round to voice these demands," Nora Hovsepian, Chair of the Armenian National Committee of America Western Region, told FOX 11.

Sunday, April 24th marks the 107th anniversary of the Armenian Genocide. Several events will be held throughout Los Angeles.