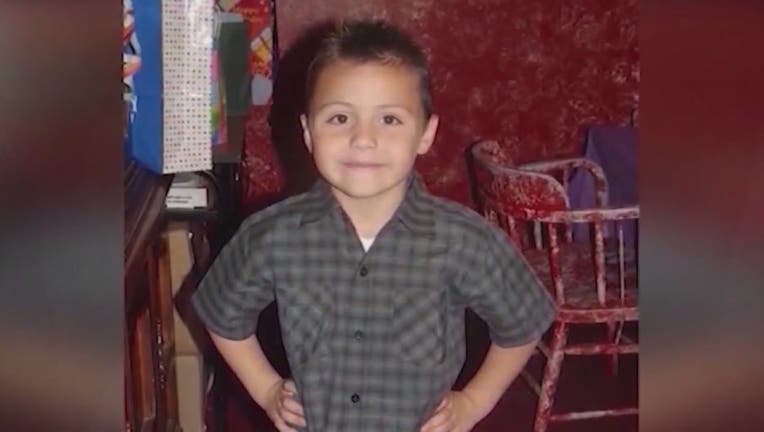 LOS ANGELES - Anthony Avalos was 10 years old when he was allegedly tortured and murdered by his mother and her boyfriend. Under the new directives of Los Angeles County District Attorney George Gascón, prosecutors will no longer be allowed to seek the death penalty.

"The Avalos family will be victimized once again as they try to seek justice for Anthony!" Los Angeles County Sheriff Alex Villanueva tweeted on Monday.

Heather Maxine Barron, 31, and her boyfriend, Kareem Ernesto Leiva, 35, were indicted on charges of murder and torture following the Lancaster boy’s death in 2018. Both remain jailed without bond.

Villanueva said that since being incarcerated, Leiva is accused of stabbing another inmate while awaiting trial.

Prosecutors said Anthony was the victim of severe child abuse. They allege that the victim’s mother and her boyfriend would repeatedly pour hot sauce on Anthony’s face and mouth, torture him by making him kneel on rice, whip him with a belt and cords, hold him upside down and drop him on his head over and over.

Court documents also stated that the couple would withhold food and water from Anthony and his siblings, and at times they were being forced to eat from the trash.

In August 2019, the office of former Los Angeles County District Attorney Jackie Lacey announced that prosecutors would be seeking the death penalty against the mother and boyfriend, a decision that has been reversed under Gascón's new directives. Gascón has vowed that his office will no longer pursue the death penalty.

Anthony's aunt and uncle, David and Maria Barron, participated in a protest in February against Gascón's new policies.

A small group of protesters hoped to speak with LA County DA George Gascon during his visit to Lancaster but things didn't go as planned for those holding signs.

"I just want him to know that it hurts," said Maria Barron.

"Mothers that kill their own children deserve nothing but the worst punishment there is. Heather Barron, you deserve the death penalty or to spend the rest of your life in prison," Barron wrote in a post on Facebook. "You shouldn’t get a second chance at life after you took away the life of an innocent child."

FOX 11 has reached out to Gascón's office for comment and is waiting to hear back.