Academy Museum of Motion Pictures opens its doors to the public

The Academy Museum of Motion Pictures will finally open its doors Thursday in the Miracle Mile district.

LOS ANGELES - The Academy Museum of Motion Pictures will finally open its doors Thursday in the Miracle Mile district, ending a years-long odyssey with a triumphant premiere paying homage to the film industry's history, its diversity, its shortcomings and its optimistic look to the future.

In development for nearly a decade by the Academy of Motion Picture Arts and Sciences -- but a dream that began 90 years ago within the organization -- the 300,000-square museum endured the array of planning pitfalls that typically face large-scale projects with big budgets in big cities: Project costs ballooned. Fundraising efforts struggled amid economic doldrums. Planners got cold feet. Architects changed.

Then came a global pandemic that further delayed the project's timeline and opening date, which was originally envisioned to occur four years ago.

The Academy, however, persisted. And its visionary complex has come to fruition, highlighted by an eye-catching glass-and-concrete sphere, affectionately dubbed the "Death Star," at the corner Wilshire Boulevard and Fairfax Avenue. The spherical structure houses a 1,000-seat David Geffen Theater and a Dolby Family Terrace.

It's a movie lover's paradise...the Academy Museum of Motion Pictures will finally open its doors to the public.

It's the most visually dramatic exterior element of the complex, which was designed by architect Renzo Piano and engulfs the former May Co. building. The structure is now dubbed the Saban Building, in honor of benefactors Cheryl and Haim Saban.

The inside, however, is even more dramatic, enveloping visitors in an homage to the art of cinema, the people and technology that who brought the industry to life and impact it has had on society as a whole.

"We are living in changing and ever-evolving times, and now more than ever we need to come together to share our stories, learn from one another and bond over being entertained and delighted," museum Director/President Bill Kramer said in a statement. "This is what movies do, and we are thrilled to be opening such a dynamic, diverse and welcoming institution devoted to this beloved artform. I am so deeply grateful to the entire Academy Museum team and all of our partners who have worked with such dedication and integrity in building this new institution -- for Los Angeles and for the world."

The museum features 50,000 square feet of exhibition space, along with two theaters, educational studios, a restaurant and other amenities. Academy officials said the museum "advances the understanding, celebration and preservation of cinema through inclusive and accessible exhibitions, screenings, programs, initiatives, and collections." 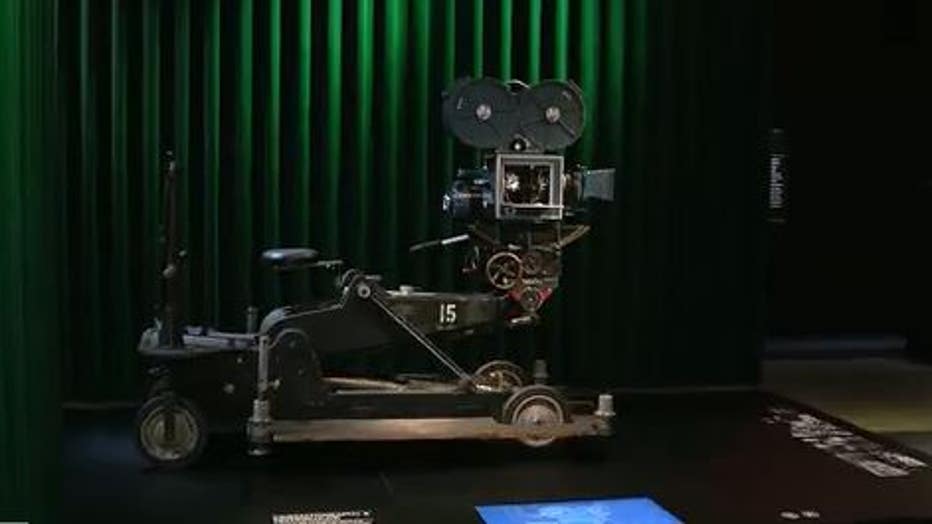 Its opening exhibitions are:

-- "Stories of Cinema," a 30,000 core exhibit exploring "the disciplines and impact of moviemaking, past and present";

-- "Hayao Miyazaki," the first North American retrospective of the work of the filmmaker and Studio Ghibli;

-- "The Path to Cinema: Highlights from the Richard Balzer Collection," displaying a vast array of "pre-cinematic optical toys and devices";

-- "Backdrop: An Invisible Art," described as a "double-height installation that presents the painting of Mount Rushmore used in `North by Northwest"'; and

-- "The Oscars Experience," a simulation giving visitors the chance to experience the thrill of walking on stage at the Dolby Theatre to accept an Academy Award.

For its opening night, the museum will also present a screening of "The Wizard of Oz," with live musical accompaniment by the American Youth Symphony, conducted by Oscar-nominated David Newman. Visitors will also enjoy the standard array of movie props, costumes, scripts, photographs and more.

The props range from Dorothy's "The Wizard of Oz" ruby slippers to "Bruce," a prop shark built for the 1975 thriller "Jaws." The shark is suspended from the museum's ceiling.

"The dream of building a museum dedicated to movies has been 90 years in the making for the Academy," AMPAS CEO Dawn Hudson said. "No matter what's been happening in the world since then, no matter what the challenges, that dream has lived on. Now people from all over the galaxy will enjoy the incredible talents of our members and of all the artists who make movies. This is now a reality that would not have been possible without the dedication and focus of hundreds of incredibly talented people and their will to see it come to life. It is with immense pride that we celebrate the opening of the Academy Museum of Motion Pictures."

Tickets for the museum can be purchased at academymuseum.org and the through the Academy's mobile phone app.

General admission tickets to the museum -- billed as the largest in the county devoted to the art and science of movies and movie-making -- will be $25 for adults, $19 for seniors aged 62 and up, and $15 for students. Access to "The Oscars Experience," an interactive simulation enabling visitors to feel as if they're walking on stage at the Dolby Theatre to accept an Oscar, costs an additional $15.

Admission for visitors aged 17 and younger, and for California residents with an EBT card, is free.

Museum members get free admission for unlimited visits. Details on purchasing memberships are available on the museum's website.