LOS ANGELES - Ambassador John Bolton and California Congressman Eric Swalwell are of different generations, they hail from different sides of the political spectrum, but the men have a surprising amount in common.

Bolton served in four presidential administrations. Swalwell is currently in his fourth term in the House of Representatives.

Bolton was born in, and currently resides in, Maryland. Swalwell, on the other hand, received his BA in government and politics, as well as his JD, at the University of Maryland.

Most importantly, both men have new books that pull back the curtain on the events surrounding the impeachment of President Trump.

This week, Elex Michaelson spoke with both men on The Issue Is about impeachment, President Trump, the coronavirus, and much more. 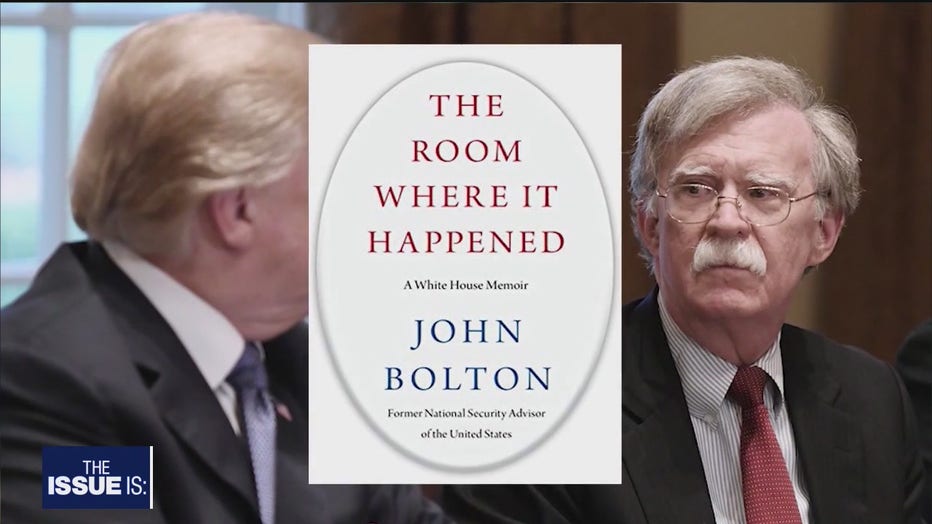 The conversation kicks off with Ambassador John Bolton, whose new book, The Room Where it Happened, chronicling his 17 months as National Security Advisor under President Trump, sold nearly 800,000 copies in its first week of release.

Given the book's title, Michaelson began by asking Bolton to describe the President Trump the public doesn't get to see, the version that exists in "the room where it happened."

"If possible, he's even more uninhibited in his behavior," Bolton described. "I think, part of the difficulty that I try to recount in the book, is keeping him on track to achieve objectives that he says he wants to achieve.

The national security realm requires study, identification of objectives, and concentrated follow-through, Bolton continued, adding that what he witnessed in the Oval Office and Situation Room were instead off-the-cuff and ad hoc actions that left him deeply concerned.

But given what Bolton experienced, and the President's subsequent response to his book, which includes the use of such phrases as "dope" and "liar," would Bolton accept the NSA position again?

"I don't second-guess the decision to go into the administration," Bolton said. "I was not unaware of the criticisms of President Trump before I joined, I felt that it couldn't be as bad as some people said, I felt that I could make a contribution, I don't think my view in that sense was different than any others who served in the administration."

Listen to The Issue Is Podcast:

Bolton added that it is an honor to serve in the White House, especially in a senior capacity, but that what many found upon joining this administration, is that while they thought they'd be working for a Conservative Republican, that ultimately wasn't the case.

"I'm not saying Trump is a liberal, because he's not, he's just not anything, he's Donald Trump, and the philosophy at work is what's best for the political prospects of Donald Trump."

"[The Democrats] never subpoenaed me," Bolton said, adding that the House Democrats started by embarking on a highly-partisan impeachment that was narrowly focused and driven solely by the whistleblower.

"Here is the fundamental mistake the House advocates made, and why I call it 'impeachment malpractice,'" Bolton continued. "Their whole concept was, as Nancy Pelosi put it, 'the President is forever impeached,' and that would deter him from engaging in this kind of conduct again. But what they failed to understand was that the Senate acquitted the President. So the result of the whole process, which they might have succeeded, had they found more Republicans, was not to deter Trump from his objectionable conduct but to encourage him."

Michaelson further pressed Bolton, asking which Republicans in Congress he thinks might have spoken out for impeachment, allowing the proceedings to take on a more bipartisan approach, as had been the case during the Nixon impeachment.

"We don't know because they were pushed away by the Democrats," Bolton responded, adding that he believes the reason Democrats didn't pursue a subpoena, even an expedited one, is because they didn't want the trial to interfere with the ongoing Democratic Presidential primary.

That primary ultimately resulted in former Vice President Joe Biden becoming the presumptive Democratic nominee, a match-up with President Trump that has left Bolton without someone to root for come November.

"I think Trump can do enormous damage to the country that may not be repairable after two terms," Bolton said. "But I think ultimately the purpose of being in politics is philosophy… but philosophically, I can't pull the lever for Joe Biden either."

Next, the conversation shifted to a brief survey of some of the major themes, relationships, and experiences that Bolton chronicles in The Room Where it Happened, a 500-plus page tome that pulls from copious notes from his time in office.

On Vladimir Putin, with whom he has dealt with since his time in the George H. W. Bush administration, Bolton said he is "very tough," "very knowledgeable," and "fully prepared."

"When I see him on the other side of the table from Donald Trump, I can tell you it is not a fair fight, and that's not good for America," Bolton said of the Russian leader.

Regarding other global autocrats, Bolton said China's Xi Jinping is "thoroughly in command of his brief," and that North Korea's Kim Jong Un is a "characteristic strongman."

"He thought he could reach a deal with Trump," said Bolton of North Korea's leader. "I think he believes if he only could have had Trump alone in the room by himself, he might have been able to do it in Hanoi."

On the domestic front, Bolton had less complimentary things to say about many members of the Trump administration, saying the following about a range of some of Washington DC's most powerful figures:

President Trump: "I think he's dangerous".
Vice President Pence: "I have high regard for him."
Secretary of State Mike Pompeo: "Very disappointed in his performance."
Former UN Ambassador Nikki Haley: "I think she was over her head.
Former Defense Sec. Jim Mattis: "I think he was a patriot…that's a more complicated answer."
Jared Kushner: "Second most powerful man in the White House."

Bolton said his former boss, President George W. Bush, under whom he served as UN Ambassador, looked mighty good in retrospect, but that former President Obama had created the environment that led to a Trump Presidency, eroding America's place on the global stage.

At best, Bolton said, Joe Biden would be another four years of Obama.

The discussion wrapped up with a discussion of legacy, with Michaelson asking Bolton what he thinks his will be.

"Long term, my first involvement in politics was when I was 15, handing out leaflets for Barry Goldwater running for President," Bolton said. "My opinion has been that philosophy is critical in helping provide for a strong America in a dangerous world, and if people remember me as somebody who pursued the philosophy vigorously, I think all the rest of it will take care of itself." 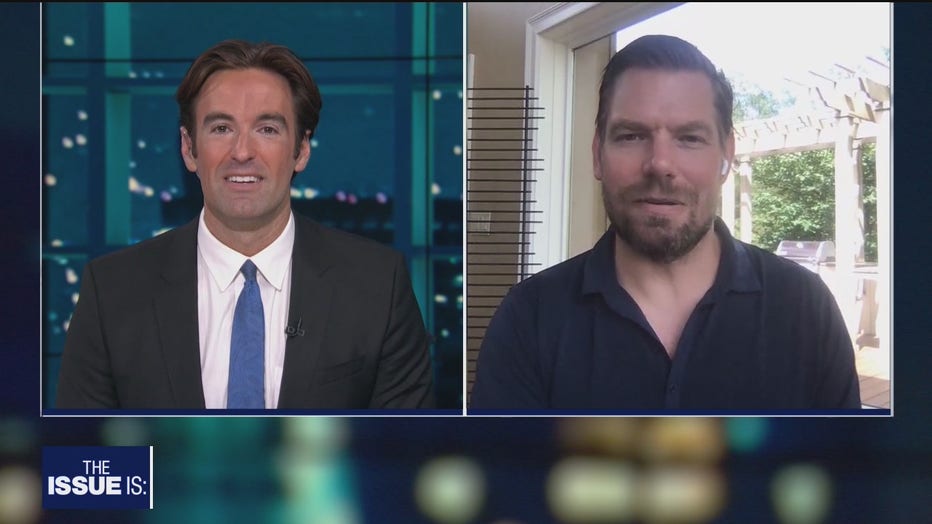 Next, Michaelson was joined by California Congressman Eric Swalwell, whose new book, Endgame: Inside the Impeachment of Donald J. Trump, gives a behind-the-scenes look at the third impeachment in our nation's history, of which Swalwell had a front-row seat.

The conversation began with Swalwell's response to Bolton's claims about "impeachment malpractice."

"He's wrong," Swalwell said. "The title of his book is The Room Where it Happened, he was nowhere near, sadly, the room where it happened. The room where it happened, is where I sat, and listened to people like Marie Yovanovitch, Fiona Hill, Lt. Col. Vindman, give sworn testimony by raising their right hand, going under oath, and speaking truth to power."

Swalwell added that Bolton's actions remind him of a firefighter who shows up only after the building has already burned down. Still though, the new allegations laid out in Bolton's book cannot be ignored, Swalwell said, which is why Rep. Adam Schiff (D-CA), Chair of the House Judiciary Committee, is currently considering what steps to take next.

Shifting from impeachment, the conversation next addressed the ongoing COVID-19 pandemic.

As cases and hospitalization continue to surge, especially in California, Swalwell has become an advocate for a national face mask mandate. This call though comes months after Swalwell tweeted, in a tweet that remains online, "Stop wearing face masks."

"As soon as all the signs showed that we should all be wearing masks, I wanted to lead by example," the Representative continued. "With COVID, we have evolved in our understanding of what makes us so at risk… the best thing we can do as leaders is lead by example, if you say something that's wrong, own it, and then lead by example, so wear a mask, keep six feet apart from others, wash your hands, there's so much that we all can do to see this curve flattened."

The conversation wrapped up with a status update about COVID relief efforts in Congress, now that the HEROES Act, which would reload the Paycheck Protection Plan, extend unemployment insurance through the end of the year, and provide hazard pay for frontline works, has already passed through the House.

Swalwell said the bill now needs to be approved by the Senate and signed by the President, and he hopes the two parties can reach an agreement before the bill expires at the end of July.