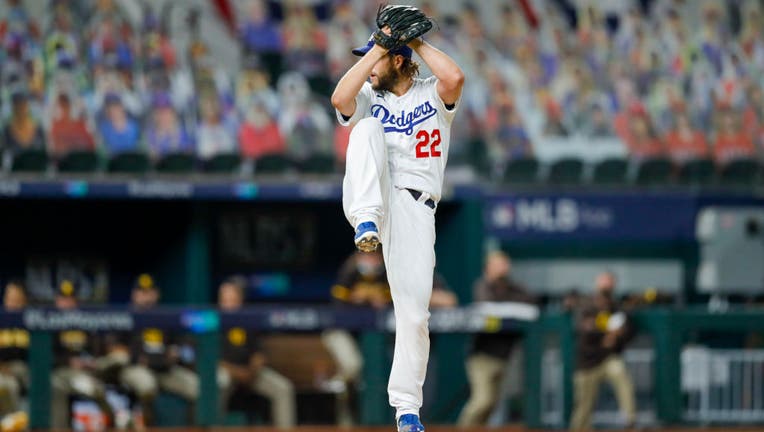 LOS ANGELES - Clayton Kershaw is scheduled to make his 2020 National League Championship Series debut on Thursday as the Los Angeles Dodgers seek
to pull even with the Atlanta Braves.

Kershaw had been scheduled to start Game 2 Tuesday but was scratched because of back spasms. The left-hander is 2-0 with a 1.93 ERA and 19 strikeouts in 14 innings in the 2020 postseason. He is 5-0 with a 1.98 ERA
against the Braves in 10 postseason starts.

Rookie right-hander Bryse Wilson is set to start for the Braves in what would be his postseason debut. Wilson was 1-0 with a 4.02 ERA in two starts and four relief appearances during the regular season.

The Dodgers cut the deficit in the best-of-seven series to two games to one Wednesday with a record-setting 15-3 victory.

Their 11 first-inning runs were the most by any team in a half-inning in MLB playoff history, as were their 18 total bases. Their three home runs tied a postseason record as did their five extra-base hits.

Ten of the runs came with two outs.

Mookie Betts began the inning with an infield hit. He was initially called out, but the Dodgers challenged the play and the called was reversed following video review.

Corey Seager followed with a double, driving in Betts.

Dayton walked Betts, the first batter he faced. Taylor scored on Seager's single. Turner was hit by a pitch to load the bases. Muncy concluded the onslaught with a grand slam.

Bellinger led off the second with a homer off Dayton.

Seager hit a solo homer with one out in the third off Dayton. The Dodgers added two more runs in the inning off Dayton on Smith's RBI ground out and Bellinger's single.

RELATED: Dodgers dominate 15-3 over Braves in crucial Game 3 of NLCS

Cristian Pache, the No. 9 hitter in the Braves lineup, homered leading off the bottom of the third.

Starter Julio Urias was credited with the victory, allowing three hits and one run in five innings, striking out five and walking two. The first three Dodger relievers -- Kenley Jansen, Pedro Baez and Alex Wood -- combined to limit the Braves to one hit and no runs in three innings.

Wright was charged with the loss, allowing seven runs and five hits in two-thirds of an inning, walking two. Dayton allowed eight runs and eight hits in two innings, walked one and hit a batter.

After being limited to one run in the first 15 innings of the series, the Dodgers scored 22 in the next six.

The loss was Atlanta's first of the 2020 season. They were the fourth MLB team to start a postseason 7-0, a feat not possible until the creation of the league championship series in 1969.

The series is being played at Globe Life Field in Arlington, Texas. The final three rounds of baseball's postseason are being played at neutral sites in an attempt to reduce the possibility of spreading the coronavirus.