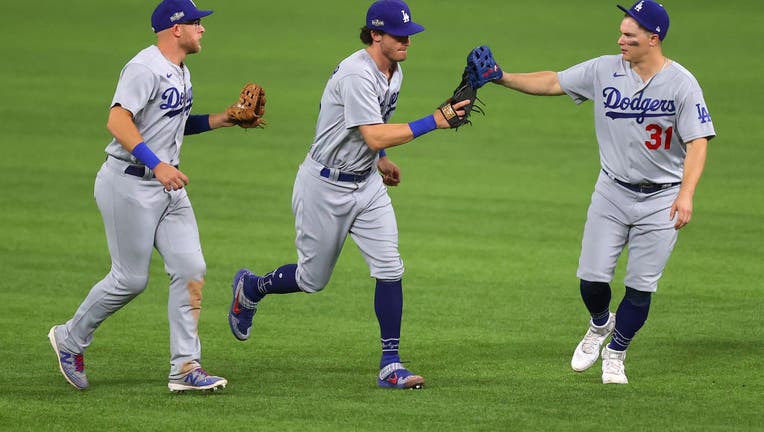 ARLINGTON, Texas - Max Muncy’s grand slam capped a record-setting 11-run first inning for the Los Angeles Dodgers, who coasted to a 15-3 rout of the Atlanta Braves on Wednesday night that cut their National League Championship Series deficit to 2 games to 1.

The slam by Muncy off Grant Dayton was the third homer in the first, the highest-scoring inning in a major league postseason game. It was among a franchise-record five homers for the Dodgers, who set a team record for postseason runs.

Joc Pederson hit a three-run homer off starter Kyle Wright to start his four-hit night, and Edwin Rios went deep on next pitch. Corey Seager had a pair of RBI hits in the opening outburst, then added a solo homer in the third as the Dodgers built a 15-0 lead — the first team with that many runs in the first three innings of a postseason game.

Winner Julio Urias, with three wins in three appearances this postseason though making his first start, struck out five while allowing one run on three hits over five innings. He walked the first two batters, but no more.

Atlanta’s miserable start was eerily similar to last October’s Game 5 of the Division Series against St. Louis, when they gave up a 10-run first inning at home in a season-ending start by Mike Foltynewicz.

Three-time NL Cy Young Award winner Clayton Kershaw likely will start in Game 4 for the Dodgers, two nights after he was scratched because of back spasms. Bryse Wilson makes his postseason debut as the third rookie right-handed starter for Atlanta in this series in what will be his first appearance since the final day of the regular season on Sept. 27.

RELATED: Los Angeles Dodgers down 0-2 in NLCS against Atlanta Braves

The Dodgers had left the tying run at third base after a four-run bottom of the ninth in what was an 8-7 loss in Game 2 on Tuesday night. They were the visiting team in Game 3, and sent 14 batters to the plate for seven hits, three walks and a hit batter over 32 minutes in the the 29,786th half-inning in postseason history.

Those 15 runs over two at-bats came after the Braves, with all of their young starters, had allowed only nine runs in their previous six games plus eight innings, a stretch that included four shutouts while winning their first seven games this postseason.

Reigning NL MVP Cody Bellinger walked and scored in the first, led off the second with a homer and added an RBI single in the third. His long ball came right after his running, leaping catch at the center field wall to rob Ozzie Albies with two on to end the Atlanta first.

Wright gave up seven runs while facing only nine batters. He had had thrown six scoreless innings in the Game 3 NL Division Series clincher over Miami last Thursday. 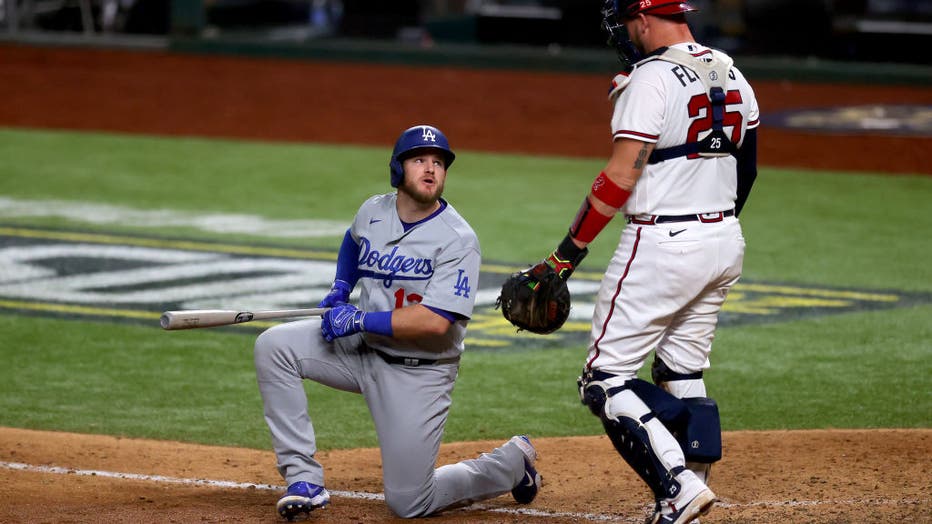 ARLINGTON, TEXAS - OCTOBER 14: Max Muncy #13 of the Los Angeles Dodgers avoids being hit by the pitch against the Atlanta Braves during the eighth inning in Game Three of the National League Championship Series at Globe Life Field on October 14, 2020

Mookie Betts had an infield single on the first pitch of the game, though he was initially called out before a replay challenge overturned the call by umpire Dan Iassogna. Seager drove Betts home with a double on the next pitch before groundouts by Justin Turner and Muncy.

Nine consecutive batters reached with two outs. Will Smith had an RBI double and Bellinger walked before the homers by Pederson and Rios. After No. 9 batter Chris Taylor walked, Dayton walked Betts, gave up the the RBI single to Seager and hit Turner on the foot before Muncy’s 435-foot slam to right-center.

When Braves No. 9 hitter Cristian Pache finally got to bat to lead off the third, the rookie hit his first big league homer — in the regular season or playoffs. All but one Dodgers starter had already batted three times.

Kenley Jansen, the Dodgers’ primary closer since 2012 and career leader with 312 saves, pitched a 1-2-3 sixth. It was a week after he needed 30 pitches to get two outs and gave up two runs without being able to finish the 6-5 victory in Game 2 of the NLDS against the Padres.

Manager Dave Roberts, who bypassed Jansen when he went to the bullpen to start the ninth in a 1-1 tie in Game 1 of this series, has avoided being specific about the closer’s role. The 33-year-old Jansen’s velocity had been noticeably down and his control inconsistent.

Jansen threw seven of his 10 pitches for strikes, all but one of them between 88-92 mph. He was averaging 93-94 mph earlier this season.

Wright and Dayton were the second set of teammates to both allow at least seven runs in a postseason game after Cleveland starter Bartolo Colon (seven runs) and Steve Reed (eight runs) in a 23-7 loss to the Boston Red Sox in Game 4 of the 1999 AL Division Series.

The Dodgers, who led the majors with 118 homers in the pandemic-shortened 60-game regular season, had only one homer in their three-game NL Division Series sweep of the Padres last week at the Texas Rangers’ new $1.2 billion ballpark with the retractable roof also open. They have eight through three games of the NLCS, where the World Series will be played.