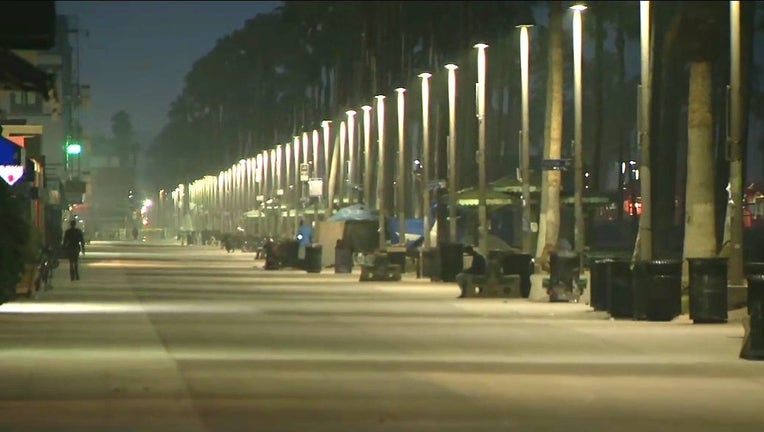 LOS ANGELES - Visible changes could be seen on the Venice Beach boardwalk after people experiencing homelessness were given a final warning on Thursday and forced out of their encampments.

Councilman Mike Bonin and Mayor Eric Garcetti said Friday that 191 people were brought indoors on the last official day of the Encampment to Home initiative to offer a pathway to permanent housing to people living along the Venice Boardwalk.

Deadline passes for homeless to relocate from Venice Beach Boardwalk

July 29 marked the "final warning" for those living in tents to leave Venice Beach. FOX 11's Mario Ramirez gives us an inside look from the beach on Friday morning.

"A metric that people are judging this by is how the boardwalk looks, and that's a reasonable one, but the metric that really matters is how many people have been brought indoors and how many lives are being transformed for the better," Bonin said.

"It has demonstrated that when offered real housing, people jump to say yes, people want to be housed."

Bonin's Encampment to Home program began on June 28, and at the time, his office estimated that about 200 people were living on the boardwalk, where a large encampment had developed during the COVID-19 pandemic. The program promised all encampment residents who accept shelter a pathway to permanent housing in an effort to clear the boardwalk.

Outreach teams with St. Joseph Center have offered services and housing to encampment residents section by section, with the boardwalk divided into five zones. The deadline for people to accept housing or leave the final zone, from Sunset to Park avenues, was Friday morning.

Garcetti said Friday that if outreach teams need a few more days to offer housing to those who haven't accepted yet, the program can be extended.

Bonin said Monday that most of the people who have accepted housing options are temporarily living in motels, some have moved into a Venice shelter and three were reunited with family. Bonin added that 119 people have been matched with permanent housing vouchers, and St. Joseph Center is searching for available units and landlords that will accept the vouchers.

In an email to constituents Monday, he quoted a man named Moses who had been unhoused for 11 years and has accepted housing from St. Joseph's Center outreach teams:

"I have to get used to actually having a door and being able to close that door," Moses told outreach teams who checked in on him, according to Bonin. "I'll never take that door for granted. When you're outside, you're outside ... I'm so grateful to this program."

Moses is living in a former motel in Venice that was converted into a Project Homekey site and is run by People Assisting The Homeless (PATH).

Along with PATH, the Encampment to Home program's partners include Safe Place for Youth, Venice Family Clinic, Self Help and Recovery Exchange, and CLARE Matrix.

Outcry about the homelessness crisis in Venice and throughout Los Angeles is a driving factor for a recall effort against Bonin launched by people in his district who would prefer stricter enforcement against homeless encampments.

On Wednesday, the Los Angeles City Council finalized approval for an ordinance that restricts encampments in certain areas of the city.

The ordinance prohibit sitting, sleeping, lying, storing personal property or otherwise obstructing the public right-of-way in several areas of the city including within two feet of any fire hydrant or fire plug, or within five feet of any operational or utilizable entrance or exit, or within 10 feet of a loading dock or driveway, or in a manner that interferes with any activity for which the city has issued a permit, or in a manner that restricts accessible passage as required by the Americans with Disabilities Act, or anywhere within a street, including bike paths.

The ordinance, which Garcetti signed Thursday, also restricts blocking the public right-of-way once the Los Angeles City Council passes a resolution to do so, posts signage and gives notice in the following areas:

The ordinance also allows the city to prevent encampments for a period of no longer than one year in areas that are deemed an ongoing threat to public health or safety, including due to:

The ordinance was accompanied by a Street Engagement Strategy developed by the city administrative officer. The CAO recommends a
"concentrated engagement process" be implemented before enforcing the ordinance for encampments in areas that require a resolution and posted signage. The CAO's recommendations include:

Councilman Mike Bonin and Councilmwoman Nithya Raman voted against the ordinance, and 13 other council members voted to approve it.

"What is wrong with this ordinance today and why am I voting against it? Because what we're doing today, even as improved, tells people who are unhoused and unsheltered and have no place to go where they cannot sleep, but it does not tell them where they can sleep. That's what it comes down to for me ... where can people go, where can people sleep when they do not have an alternative," Bonin said.

The councilman shared his own experience being unhoused, saying, "Some of those nights I slept in the car, some of those nights, when my car was in the shop, I slept on the beach. I cannot tell you how much turmoil is in your heart when the sun is setting and you don't know where to sleep. I cannot tell you how demoralizing and dehumanizing and defeating that experience is when you don't know where you're going to sleep."

He added that the city only has enough beds to shelter 39% of the city's homeless population.