Vigil held for South LA mom of six found beaten to death, rolled up in blanket

The family of 53-year-old Fatima Johnson held a vigil Monday night after the South Los Angeles mother was found brutally murdered in her own home on the Fourth of July.

LOS ANGELES - The family of 53-year-old Fatima Johnson held a vigil Monday night after the South Los Angeles mother was found brutally murdered in her own home on the Fourth of July.

Police said Johnson's daughters came to her home in the 7600 block of South Western Avenue Sunday after they hadn't heard from her in several days. A family relative brought a key to the home, and some of her daughters discovered Johnson. 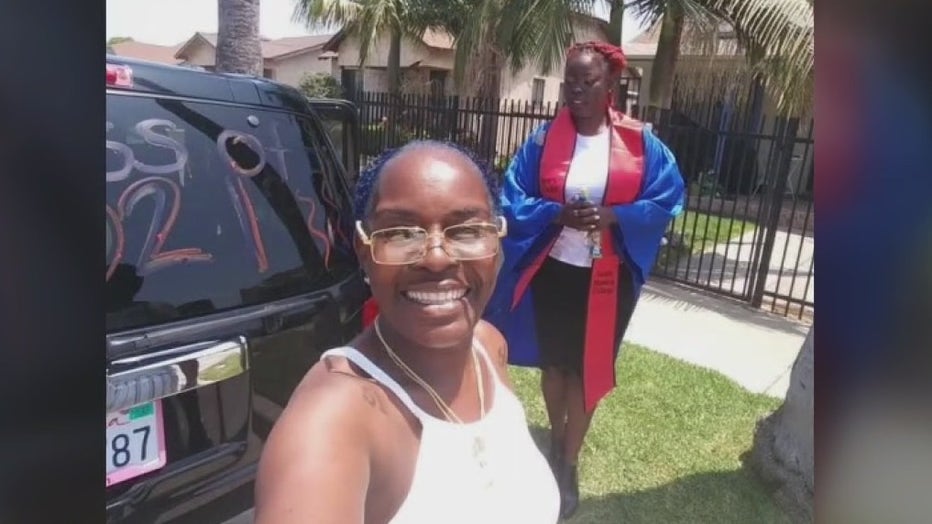 The family told FOX 11 that Johnson was bound at the hands and feet with her mouth taped and she was also badly beaten. Johnson was pronounced dead at the scene.

"We were prying the door open. It wouldn't open so we went around to the back with the key. When I looked on the floor, I saw the top of her head and she was rolled up in a blanket in the corner so I started freaking out. When I unrolled her, she had duct tape around her mouth and her hands were bound. Her face was beaten. She had wire and duct tape on her hand. It was so tight on her hand, I cut my finger trying to take it off," said Tasby.

A South Los Angeles neighborhood is in shock after a mother of six is found brutally murdered in her apartment.

Johnson was a mother of six with four daughters and two sons. She was also a grandmother.

"Right now, this whole situation feels unreal. It doesn't feel like it's something that I'm actually going through. It feels like something that happened to someone else as if I'm in a bad dream and I'm going to wake up eventually. I woke up this morning and realized I cannot call my mother ever again. I can't hear her voice. I only got videos and memories and hurt doesn't even describe what I feel in my heart right now," said Tyesa Harvey.

A South Los Angeles woman was discovered bound, gagged with duct tape and beaten to death inside her home over the weekend.

Harvey said she last saw her mother on Wednesday.

"I really left in a bad spirit. She was here with her boyfriend and I didn't feel comfortable. I spoke with her the next day and she assured me she was OK, and she knew what she was doing, that she would be fine, her relationship was fine and she was just helping this person out with their sobriety," said Harvey.

Harvey said her mother was a friend to many in the community, was always willing to help, and had a "big heart." Johnson was also studying to become a registered nurse.

"She was taking it seriously. She was getting A's. She went to work on weekends and did doubles," said Tanesha Hargrave, Johnson's second-born daughter.

The family said they believe they know who killed Johnson, and said they passed along all of the information to authorities.

A GoFundMe page has been launched to help the grieving family.

Police from the Los Angeles Police Department's South Bureau Homicide division released a press release Monday stating the suspect is still loose, and the motive is unknown. The release said their investigation is ongoing, and no suspects have yet been identified.