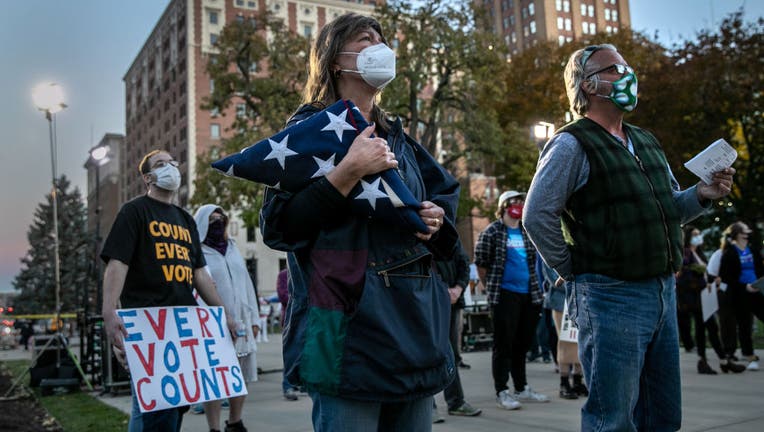 Protester Kristan Small carries a flag from her father's funeral while attending a fair election demonstration on November 04, 2020 in Lansing, Michigan.

LOS ANGELES - The U.S. has recorded more than 100,000 new confirmed coronavirus cases for a third consecutive day, according to data from Johns Hopkins University.

It has been 288 days since the first reported U.S. COVID-19 case, and new confirmed cases of the novel coronavirus in the U.S. have climbed to an all-time high of more than 86,000 per day on average, in a glimpse of the worsening crisis that lies ahead.

The total U.S. death toll is already more than 235,000, and total confirmed U.S. cases have surpassed 9.6 million. Those are the highest such totals in the world, and new infections are increasing in nearly every state.

Rural counties in states such as Montana, the Dakotas, Nebraska, Kansas, Iowa and Wisconsin — areas that have often seen lower rates of adherence to social distancing, mask-wearing and other public health measures — have been a focal point in the latest surge in cases.

According to health experts, studies and the World Health Organization, the demographics of the COVID-19 pandemic are shifting.

State health officials were pausing for a moment of introspection. Even as they worry about rising numbers of hospitalizations and deaths, they hope to reframe their messages and aim for a reset on public sentiment in the wake of a contentious election.

“Public health officials need to step back, listen to and understand the people who aren’t taking the same stance” on mask-wearing and other control measures, said Dr. Marcus Plescia of the Association of State and Territorial Health Officials.

Mail-in and absentee ballots were at a historic high as many voters avoided polling locations out of fears of the ongoing pandemic.

But voter sentiment on the status of the pandemic seemed sharply divided. The pandemic was considered at least somewhat under control by slim majorities of voters in many red states, including Alabama (60%), Missouri (54%), Mississippi (58%), Kentucky (55%), Texas (55%), Tennessee (56%) and South Carolina (56%).

As the election mood dissipates, rising hospitalizations amid colder weather create “a really pivotal moment" in the pandemic, said Sema Sgaier, executive director of the Surgo Foundation, a Washington, D.C.-based nonprofit that worked with Harvard University-affiliated Ariadne Labs to develop a tool for estimating vaccine needs in states.

“We really need to get our act together. When I say ‘we’ I mean collectively,” Sgaier said. Finding common ground may become easier if one of more of the vaccine candidates proves safe and effective and gains government approval, she said.