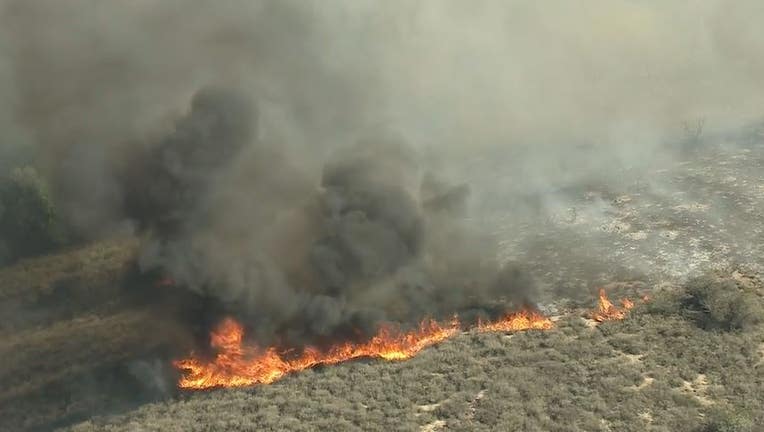 THOUSAND OAKS, Calif. - Three juveniles have been arrested for allegedly starting a brush fire in the hills near Westlake High in Thousand Oaks that burned approximately 28 acres.

Three juveniles, two 14-year-old's and a 15-year-old, were detained by residents after they were seen exiting the brush, shortly after the fire started.

Authorities later determined that the fire, named the County Fire, was caused by "human activity," at which point, the juveniles were identified as suspects.

They were arrested on Tuesday, cited for recklessly starting the fire, and released back to their parents.

"The Ventura County Fire Department and the Thousand Oaks Police Department would like to thank the citizens who quickly reported the fire and acted swiftly to help identify the suspects," authorities wrote in a press release Thursday.

The fire broke out around 3:20 p.m. on April 29 south of the 500 block of Country Valley Road and burned parts of Thousand Oaks and Westlake Village, the Ventura County Fire Department said.

Two firefighters were hurt while battling the blaze and their injuries were believed to be minor, fire authorities said.

Several residents from the area watched as fire crews battled the Country Fire.

"We walked out and it turns out there was a fire right next to us and there were already fire trucks out here. They already blocked off the road so we couldn't really leave but luckily it looks like they have everything under control. It was a trip watching helicopters every 30 seconds come by and drop water, there were at least three, four, five planes circulating so it feels like they had a really good grasp of the situation but it was scary being this close," said Arash Shokouh. 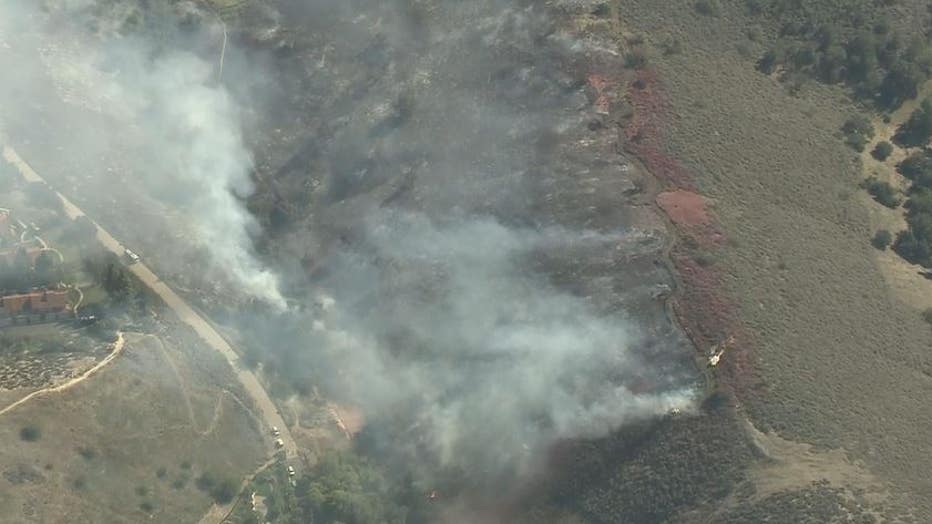 Denise Dickey, who lives in the area, also walked over to watch after hearing about the fire from a friend.

"I was texting with one of my friends and he says, 'Are you home?' and I say yeah and he goes, 'You might want to go outside. There's a fire on your hill.' and I came out to this and I'm still having PTSD from the Woolsey fire. I'm a native to California and I never had a problem with the winds until that fire and now, it's just like the hair on the back of my neck," said Dickey.

The Woolsey fire took place in 2018, leading to deaths and damaged homes while burning in LA and Ventura counties.

Dickey said she is concerned about this wildfire season.

"It's gonna be a nail-biter. I'm just scared. I'm tired of being on edge with this and it just seems like it's getting worse. When I first moved out here from the valley years ago in the 1960s, I remember when they had sheep and goats on the hill and we didn't have the fires we have now. I wish they'd bring back the sheep and the goats and start eating this stuff and maybe it would start maintaining some of this so we don't have this and we don't have a fire that starts and ends up in Malibu and displaces so many people," said Dickey.

Fire officials are preparing for what is expected to be a devastating wildfire season following a winter with little precipitation.

Governor Gavin Newsom has declared a drought emergency in two Northern California counties in response to conditions affecting much of the state.

"It sounds cliche but fire season truly is year-round. We have fires every month of the year now so we want people to have a heads up, keep extremely informed. These hot, dry, windy days, even though we're at the end of April with yesterday's fire in the Castaic area being over 600 acres, I know this one's only 28, but it really just underscores how hot and dry the conditions are right now and that makes fire behavior extremely likely," said Robert Welsbie, the Fire Captain for the Ventura County Fire Department.

The state Department of Water Resources says this is the fourth driest year on record statewide, especially in the northern two-thirds of the state. But Newsom said urban Californians are using 16% less water than they were at the start of the last major drought from 2012 to 2016.