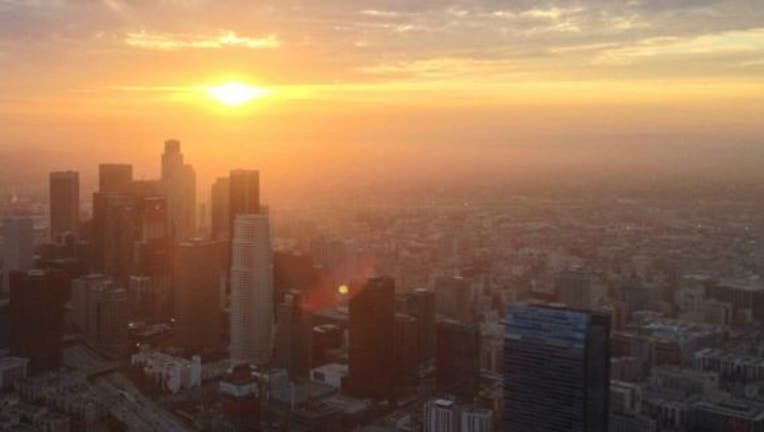 LOS ANGELES - It isn't quite summer yet, but the Southland will find itself baking in summer-like heat this week, with triple-digit record temperatures anticipated in the valleys and mountains, while even downtown could reach up to 100.

The forecast is raising fears of heat-related illnesses, strain on the power grid and the possibility of brush fires that could quickly spread in the hot and dry conditions.

The latest weather forecast for the greater Los Angeles area, including beaches, valleys and desert regions.

The coastal area and downtown Los Angeles will be under an excessive heat watch from Tuesday morning through Wednesday evening, but even that part of town will see "dangerously hot conditions with temperatures in the 90s to around 100 degrees, especially inland and in the Hollywood Hills," according to the NWS.

Forecasters said the Antelope Valley could see temperatures ranging from 106 to 112 degrees during the heat wave, increasing the risk "for heat related illnesses, particularly for those working or participating in outdoor activities."

Mountain areas are forecast to bake in temperatures of 95 to 108 degrees, with the hottest conditions on Tuesday and Wednesday. The valleys could reach as high as 109 degrees.

"A significant heat wave is expected to be in full effect Tuesday through the remainder of the week with peak high temperatures expected Tuesday through Thursday,'' according to the NWS. "High temperatures will be 10 to 20 degrees warmer than normal. There will be gusty northerly winds (Monday) afternoon and Tuesday, especially across the Santa Barbara south coast and somewhat weaker through the Interstate 5 corridor. Some cooling inland by this weekend and a return of low clouds should be limited to coastal areas by Friday morning."

The weather service has already issued a red flag warning of extreme fire danger for southern Santa Barbara County due to the anticipated conditions Monday night through Wednesday morning. As of mid-morning Monday, no red flag warnings had been issued in Los Angeles County, but forecasters noted that "hot and dry conditions will persist most of the week." Gusty conditions could become an issue in late afternoons in the Antelope Valley, creating "a few hours of critical conditions" each day.

The California Independent System Operator, which manages the state's power grid, released a statement saying the agency "could take a number of actions to reduce demand and access additional energy."

The agency declared a "restricted maintenance operation" condition that will be in effect from noon to 10 p.m. Tuesday through Friday due to the forecasted high temperatures and demand. The declaration warns that all available resources will be needed to maintain supply, and calls on suppliers to defer scheduled maintenance on generators and transmission lines if possible.

"It is still too early to know the precise impact (the) high temperatures will have on the electricity grid,'' according to Cal ISO. "But the ISO is closely monitoring conditions and the anticipated increase in demand for electricity and will issue additional public notifications as warranted."

If necessary, the ISO could issue a Flex Alert, which is a voluntary call for residents to conserve power during peak hours to reduce strain on the grid.

The NWS warned that extreme heat will "significantly increase the potential for heat-related illnesses."

"Be prepared to drink plenty of fluids, stay in an air-conditioned room, stay out of the sun and check up on relatives and neighbors," according to the NWS. "Young children and pets should never be left unattended in vehicles under any circumstances. This is especially true during warm or hot weather when car interiors can reach lethal temperatures in a matter of minutes."

Also due to the heat wave, the South Coast Air Quality Management District issued an ozone advisory Monday through Saturday, predicting increased likelihood of poor air quality in many areas. Levels of ground-level ozone – the predominant summertime pollutant -- are likely to reach unhealthy or higher air quality index levels throughout most of the Southland.

And, the Los Angeles County health officer issued an Excessive Heat Warning starting Monday and ending Saturday for West San Fernando Valley, East San Fernando Valley, East San Gabriel Valley, Santa Clarita Valley and Antelope Valley. The warning will be in effect through Thursday in the rest of the San Gabriel Valley, and from Tuesday through Wednesday in the Los Angeles basin. The warning reminds everyone in the affected regions to take precautions to avoid heat-related illness, especially older adults, young children, outdoor workers, athletes, and people with chronic medical conditions.

"While it is very important that everyone take special care of themselves, it is equally important that we reach out and check on others, in particular those who are especially vulnerable to the harmful effects of high temperatures, including children, the elderly, and their pets,'' said  Los Angeles County Health Officer Muntu Davis. "High temperatures are not just an inconvenience, they can be dangerous and even deadly."

County and city partners operate cooling centers during times of high heat. Residents who do not have access to air conditioning are encouraged to take advantage of free cooling centers. To find a location, visit https://ready.lacounty.gov/heat/ or call 211.

The city of Glendale will operate a cooling station Tuesday through Thursday at the Pacific Community Center, 501 S. Pacific Ave., from 10 a.m. to 6 p.m. each day. The city of Carson will offer cooling centers Tuesday and Wednesday, generally from noon to 9 p.m., at the following parks: Anderson, Calas, Carson, Del Amo, Dolphin, Dominguez, Hemingway, Mills, Foisia and Stevenson, along with the Carson Community Center and Veterans Park/Sports Complex.

Los Angeles County residents and business owners, including people with disabilities and others with access and functional needs can call 2-1-1 for emergency preparedness information and other referral services.