A man accused of breaking into a Venice home while carrying a sword tells a woman to get out – at her own house.

LOS ANGELES COUNTY, Calif. - A man accused of breaking into a Venice home with a sword and a kitchen knife tells a woman to get out – at her own house.

The homeowner, Marcia Davalos, shared a cell phone video of the bizarre exchange between her and the suspect.

"You're in my house," the suspect is heard telling Davalos.

"Get out of here right now," Davalos tells the suspect before he shuts the door. 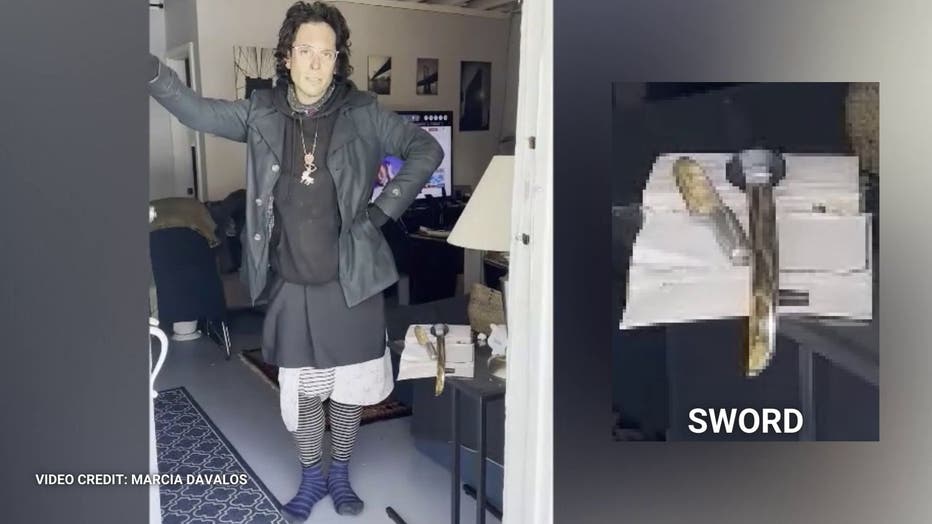 Cell phone video shows a man telling a woman to get out of her own home.

In the corner of the cell phone video, you can see a sword and a kitchen knife placed on a small table – which Davalos said were the suspect's weapons.

"It's so sad that the community has to keep enduring through this kind of stuff. It shouldn't be happening," Davalos said.

The Los Angeles Police Department made their way to Davalos' home. The man's refusal to leave the house prompted the SWAT team to head to the scene.

The standoff lasted more than an hour, and part of the reason the man took that long to surrender was because he may have been taking a shower or bath while SWAT officers were outside waiting, according to FOX 11's crew.

LAPD deployed gas into the house, which eventually got the suspect to get out of Davalos' home, FOX 11's crew reports.

Around 4:30 p.m., the suspect surrendered to police, wearing nothing but a towel. No one is believed to be hurt from the SWAT standoff.

Davalos said the suspect tore up the place.