A beloved street vendor was stuck and killed by a stolen Amazon truck.

LOS ANGELES - A beloved street vendor in South Los Angeles lost his life after he was struck by a stolen Amazon truck Thursday afternoon, police said.

The truck was reported stolen at about 2:15 p.m. in the area of Woodlawn Avenue and 41st Place, near Gilbert Lindsay Recreation Center, according to preliminary reports from the Los Angeles Police Department.

Investigators say an Amazon truck driver was making deliveries when he left his truck unattended when the suspect got behind the wheel and took off. The driver immediately contacted authorities and officers were able to track down the stolen vehicle about 10 minutes later.

The family of a South LA vendor, who was killed in a collision involving a stolen Amazon truck, is speaking out and demanding justice.

The suspect drove the truck to the area of East 48th Street and South Main Street, where he allegedly lost control. He slammed into the street vendor and three people on the sidewalk, police said. The street vendor, identified by family as Jose Rangel, was pinned against a building by the truck. He was pronounced dead at the scene.

"Right now, we’re coming together as a family and just trying to stay strong during this time that was so unexpected. My dad was a hard worker," the victim’s son who flew him from out of state said. "We just hope justice prevails."

The suspect attempted to flee the area on foot. However, he was taken into custody shortly afterward, according to police.

The suspect was identified as 37-year-old Cristian Ramos Sanchez. Ramos-Sanchez was booked for a felony hit-and-run and bail was set at $85,000. He's scheduled to go in front of a judge on Feb. 22. 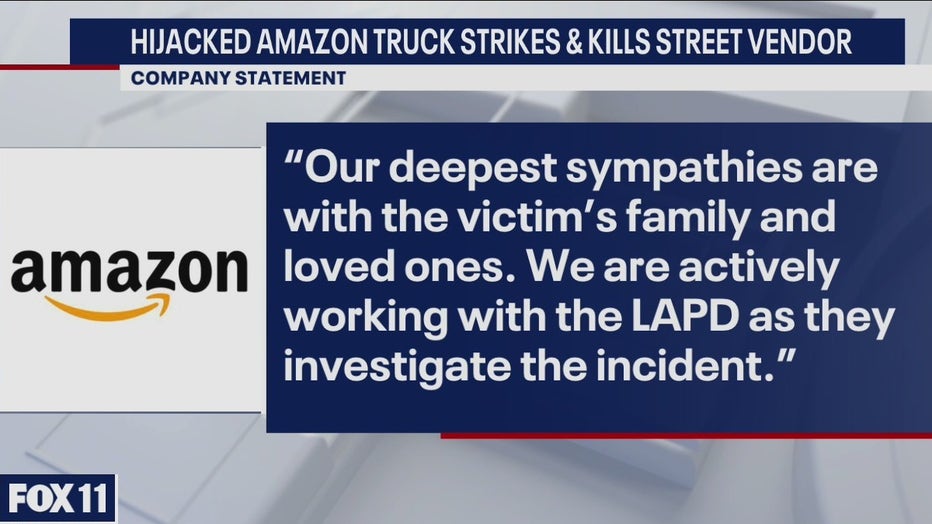 Amazon spokesperson Alisa Carroll sent FOX 11 the following statement Friday morning: "Our deepest sympathies are with the victim’s family and loved ones. We are actively working with the LAPD as they investigate the incident."