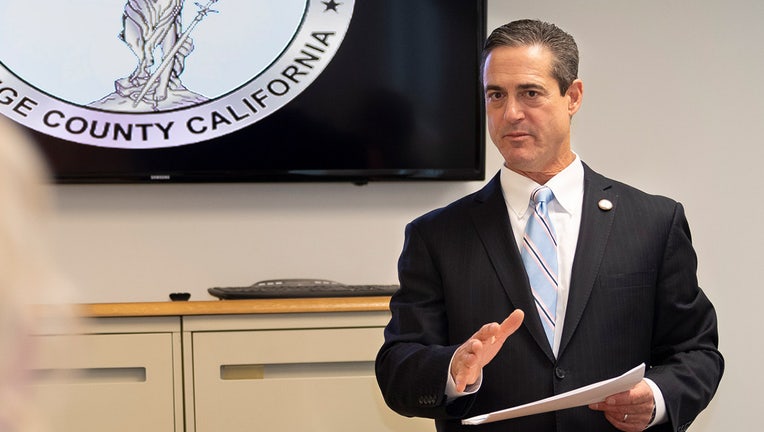 "We as a society have engaged in systemic mass incarceration. As a prosecutor, I will stop it. We as a society have prosecuted people of color differently. As a prosecutor, I will stop it," said Spitzer. "We cannot fix a systematic problem without a systematic approach. That approach must be thoughtful, thorough, and include different perspectives, different experiences, and different ideas. Justice is not evidenced by the longest sentence; justice is what is best for the individual, the victim, and society as a whole."

Spitzer released a series of guiding principles for the Orange County District Attorney’s Office regarding the "role of the prosecutor in our society."

• End mass incarceration
• Establish a Conviction Integrity Unit
• Establish Recidivism Reduction Units that address an individual’s chances for success
• Support mental health diversion when practical to address underlying issues with programming
• Support dual 911 dispatch with mental health response and training to 911 calls seeking psychiatric assistance
• Support policies that prevent law enforcement agencies from investigating their own officer-involved shootings
• Ban the use of carotid holds by law enforcement within the Orange County District Attorney’s Bureau of Investigation and support the ban of carotid holds across all District Attorney Investigation Bureaus
• Response to "Defund the Police" is to require local jurisdictions to support and advocate for sufficient community resources that support the above principles and initiatives that reduce recidivism and provide equal opportunities for all.

"Seeking justice means we must constantly ask ourselves whether the system in which we hold so much power is working in a fair way for all people, from all backgrounds, experiences and beliefs, and who may or may not be citizens of this country," said Spitzer. "Where the system fails to be fair, we fail to be fair unless we improve the system. And where we have failed, we must acknowledge those failures as important steps in improving our own work, and the system of justice in which we do that work."

Ending mass incarceration and addressing systemic racism has been the goal of Los Angeles County's newly elected District Attorney George Gascón, who has received heavy criticism in his approach to addressing the issues.

Since being sworn into office in December, Gascón has announced several reform directives, including barring prosecutors from seeking the death penalty, not allowing prosecutors from attending parole hearings or filing most sentencing enhancements that can increase a defendants' prison term.

On Monday, Judge James Chalfant's issued a preliminary injunction against Gascón, saying he cannot order his prosecutors to ignore laws that the judge says protect the public, including three-strike allegations and sentencing enhancements.

Critics argue that Gascón's methods fail to support the victims of violent crimes, who, as a result of Gascón's reforms, were often left to face their attackers by themselves.

Spitzer's approach is much different. He expressed that in extreme cases, "justice demands prolonged separation of the most violent offenders from society in order to keep all members of our community safe."

He also noted that "prosecutors advocating for this separation must remain mindful of the significant impact of this penal consequence on the offender’s family and support system."

He said he plans to ban the use of carotid holds by law enforcement within the Orange County District Attorney Bureau of Investigation, the controversial police neck hold that drew nationwide outrage over the killing of George Floyd by a Minneapolis police officer who knelt on his neck for more than eight minutes. He also supports the ban across all District Attorney Investigation Bureaus.

Another one of Spitzer's policies was sparked by the death of Breonna Taylor, who was shot and killed in her Louisville home last March by police who were executing a "no-knock" warrant. Spitzer wrote that he supports eliminating "no knock" warrants, "unless a specific exigency is specifically articulated and a magistrate approves pursuant to the warrant approval terms."

He also plans to require law enforcement to announce the use of deadly force and bans shooting at a moving vehicle unless it is a last resort to protect life.