The South Fire near Fontana in San Bernardino County grew overnight from 500 to 700 acres, officials said.

SAN BERNARDINO COUNTY, Calif. - Firefighters on Wednesday contained a wildfire that had been burning in the Lytle Creek area, which has destroyed multiple homes and put farm animals in danger. The community in the San Gabriel Mountains is roughly ten miles north of Fontana in San Bernardino County.

The fire erupted on the afternoon of Aug. 25 and the latest information provided by the San Bernardino National Forest Monday stated the fire burned a total of 819 acres before it was 100% contained. The blaze destroyed several homes as well as 18 outbuildings, officials said.

One firefighter was taken to a hospital with a minor injury, fire officials said.

A group of llamas were stranded as wildfire spread around them in the Fontana area.

When the blaze ignited, it was fueled by low humidity, wind, and dry conditions. Now, firefighters are working under more favorable conditions as monsoonal moisture moves into the area. 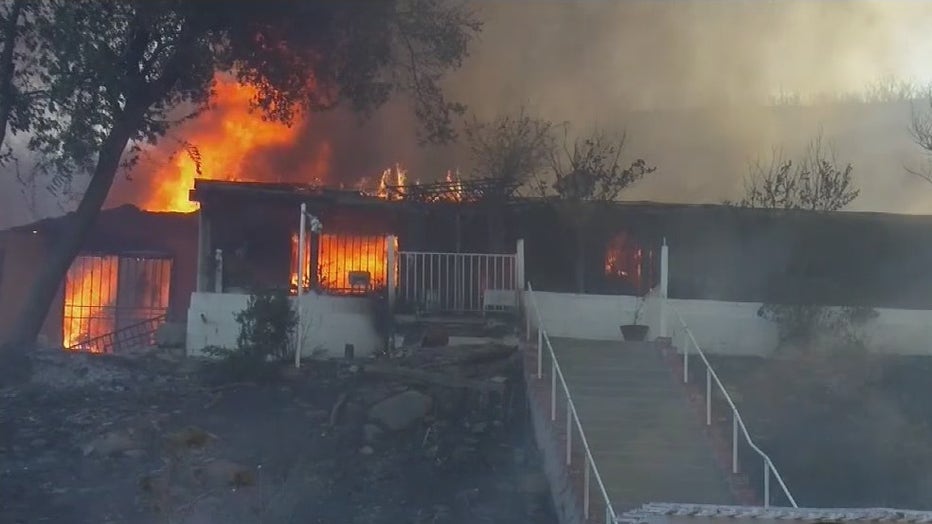 On Sunday, all evacuation orders were lifted.

Lytle Creek road was temporarily closed but has since reopened, according to officials. According to Cal Fire San Bernardino, nearly a thousand residents were under evacuation orders when the fire first sparked.

An evacuation shelter was set up at Jessie Turner Health and Fitness Community Center, located at 15556 Summit Avenue. A shelter for large animals is also provided at the Devore Animal Shelter, located at 19777 Shelter Way in San Bernardino.

An information call center line for those impacted by the fire is available at 909-383-5688.

All ramps at Sierra at the 15 Freeway reopened. High 138 is open but access to Line Pine Canyon is closed, Caltrans said. 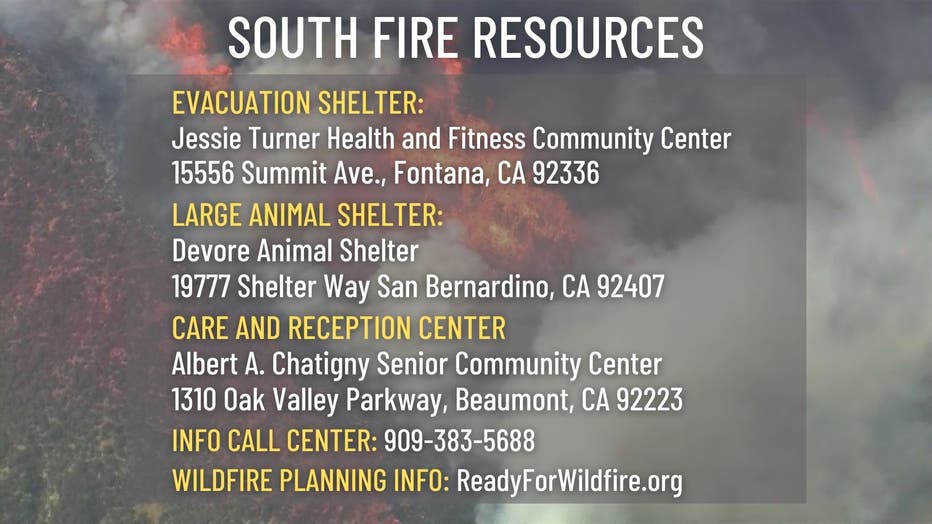 A GoFundMe has been set up for Margarita Hernandez, one of the residents displaced after the wildfire, her granddaughter told FOX 11. Those interested in helping the family can click here.

A woman lost her home to the South Fire burning in Lytle Creek. Her daughter, Robin, spoke to FOX 11's Susan Hirasuna.

SkyFOX was also over multiple homes in the area fully engulfed in flames.