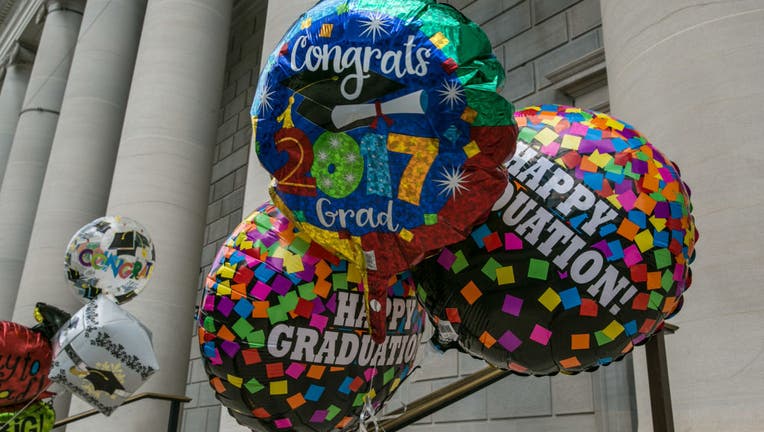 WASHINGTON, DC - JUNE 6: Helium balloons congratulating recent graduates are tied to a railing outside Constitution Hall is viewed on June 6, 2017 in Washington, D.C. The nation's capital, the sixth largest metropolitan area in the country, draws mil

As families start to gather in the coming weeks for high school and college graduation celebrations, power companies are warning about the dangers of releasing balloons into the air.

Shiny, metallic balloons, also known as Mylar balloons, have a silvery coating that conducts electricity. If the balloons make contact with power lines, they can short transformers, melt electric wires and cause power outages, all of which pose public safety risks, according to Evergy, an electric company that serves more than 1.6 million customers in Kansas and Missouri.

The video above shows what happens when a Mylar balloon comes in contact with a power line. The demonstration was performed by trained linemen with the proper safety equipment in a controlled environment.

"Most people aren’t thinking about interfering with power lines if a balloon is released. We want to raise awareness to help keep customers safe and the lights on for graduation parties and all occasions," Evergy spokeswoman Gina Penzig said.

While Evergy said they don't specifically track outages caused by the balloons, Arizona Public Service reports Mylar balloons have caused 11 power outages in their service territory so far this year, disrupting service to more than 6,100 customers.

PARTY OVER FOR HELIUM BALLOONS IN CALIFORNIA CITY AFTER BAN APPROVAL

To keep everyone safe during graduation season, here are some safety tips:

Read more of this story on FOX Weather.