CDC Director Rochelle Walensky urged teens and adolescents to get vaccinated against COVID-19, pointing to high hospitalizations among this group in March and April.

ST. LOUIS - The Pfizer-BioNTech and Moderna COVID-19 vaccines generate an immune response that is both strong and potentially long-lasting, according to new research.

A study published Monday in the journal Nature found evidence that the vaccines induced strong, persistent immunity to COVID-19. The evidence suggests that many who have already received either vaccine may not need a booster shot, as long as the coronavirus and its variants do not significantly evolve and render the vaccines ineffective.

Both Pfizer and Moderna vaccines were developed with mRNA technology, which provides instructions for the body to build and release foreign proteins, such as the spike protein found in SARS-CoV-2, the virus that causes COVID-19.

The new study, led by researchers at Washington University School of Medicine in St. Louis, found that immune cells were still being churned out to fight the virus nearly four months after receiving the first dose.

The team focused on the so-called germinal centers in the lymph nodes. Germinal centers, which form either from natural infection or vaccination, are like "boot camps for immune cells" where inexperienced cells are trained to better recognize the enemy and sharpen weapons, according to the university. 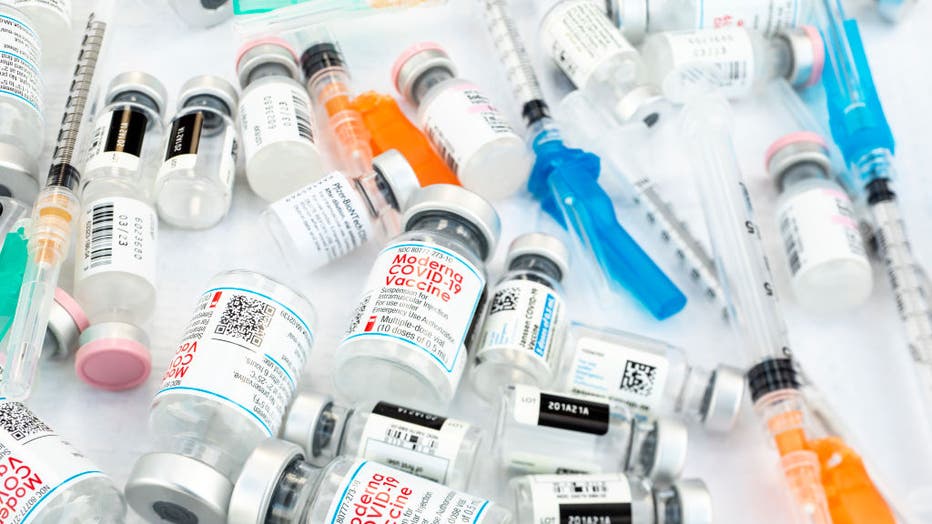 FILE - Bottles of the three current COVID-19 vaccines from Johnson & Johnson, Moderna and Pfizer-BioNTech are photographed at the COVID-19 vaccination site at Kedren Community Health Center on May 13, 2021, in Los Angeles, California. (Jay L. Cle

Scientists don’t fully understand why some vaccines induce protection that lasts a lifetime, such as the one for smallpox, while others require regular booster shots. But many have suspected that the difference may be due to the quality of the germinal centers brought on by different vaccines.

The Pfizer and Moderna vaccines received an emergency use authorization from the U.S. Food and Drug Administration in December. The mRNA vaccines, which stand for Messenger RNA vaccines, are new — but have been studied for decades.

Ellebedy and his team first began studying whether this new kind of vaccine induces a good germinal center response in mid-December. The study involved 41 participants, including eight who had been previously infected with the virus. All were immunized with two doses of the Pfizer-BioNTech vaccine.

The team found that all 14 participants had formed germinal centers with B cells producing antibodies that target a key SARS-CoV-2 protein. The response increased after the second shot and then stayed high, researchers said.

At 15 weeks after the first dose, eight of 10 people still had detectable germinal centers containing the B cells targeting the virus, according to the study.

"The fact that the reactions continued for almost four months after vaccination — that’s a very, very good sign," Ellebedy told the New York Times. He added that germinal centers typically peak one to two weeks after immunization and then diminish.

The team also obtained blood samples from all 41 people who received the Pfizer vaccine. Samples were obtained before the administration of each dose of the vaccine, as well as at weeks four, five, seven and 15 after the first dose.

Dr. Jane O’Halloran, the co-first author of the study and Washington University assistant professor of medicine, said they didn’t aim to compare the effectiveness of vaccination in people with and without a history of infection — "but when we looked at the data we could see an effect."

"If you’ve already been infected and then you get vaccinated, you get a boost to your antibody levels. The vaccine clearly adds benefit, even in the context of prior infection, which is why we recommend that people who have had COVID-19 get the vaccine," O’Halloran said.

The study echoed previous findings reported in May that the immunity created after having COVID-19, in addition to getting vaccinated, could last in the body for years.

How long protection will last from the mRNA vaccines remains unknown. The study suggests that many of those who have received the Pfizer and Moderna vaccines will be protected over the long term against many of the existing coronavirus variants. The findings showed that vaccines produced high levels of neutralizing antibodies effective against three variants of the virus, including the one originally detected in South Africa that has shown some resistance to vaccines.

But experts say a booster may be needed as the virus continues to spread and evolve around the world in areas with low vaccination rates.

"Anything that would actually require a booster would be variant-based, not based on waning of immunity," Dr. Deepta Bhattacharya, an immunologist at the University of Arizona, told the Times. "I just don’t see that happening."