FOX 11's Gina Silva and Phil Shuman got a chance to look through evidence, photos and artifacts gathered during the Richard Ramirez investigations, a convicted serial killer known for terrorizing California in the mid 1980s.

LOS ANGELES - On this day in 1984, the serial killer known as the Night Stalker, who terrorized Southern California in the mid-1980s, began his killing spree.

Richard Ramirez had been on death row at San Quentin State Prison since he was convicted in 1989 of 13 murders in 1984 and 1985. He also was convicted of rape, sodomy, oral copulation, burglary, and attempted murder.

Ramirez died June 7 at age 53 at a hospital where he had been taken for treatment of liver failure. The Department of Corrections and Rehabilitation said Ramirez died of "natural causes." He had been housed on death row for decades and was awaiting execution, even though it has been years since anyone has been put to death in California. 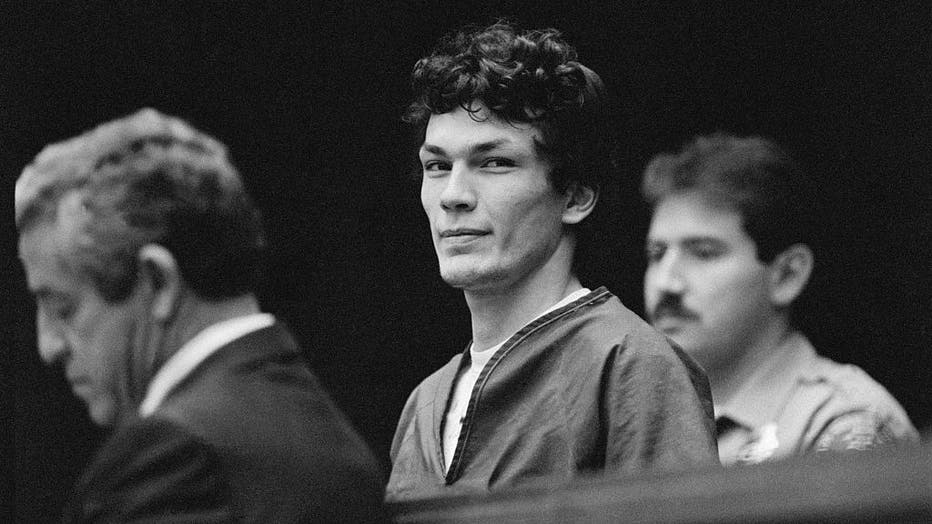 Richard Ramirez, accused of being the serial killer called the "Night Stalker", appears in court to fire his public defenders and hire a private attorney. Ramirez was eventually found guilty. Los Angeles, October 9, 1985.

Ramirez was a self-proclaimed Satanist whose trial produced gruesome details about the mutilation of his victims.

He was nicknamed the Night Stalker by the media because residents were warned to lock their doors and windows as the killings peaked during the hot summer of 1985. The killer had been entering homes through unlocked windows and doors. He then killed his victims with a gun or knife, burglarized the homes, and sexually assaulted his female victims.

During his era of terror, Ramirez left satanic symbols at murder scenes and forced some victims to "swear to Satan. " He entered homes through unlocked windows and doors.

Ramirez was captured and beaten in 1985 by residents of an East Los Angeles neighborhood while attempting a carjacking.

At his first court appearance, Ramirez raised a hand with a pentagram drawn on it and yelled, "Hail, Satan." 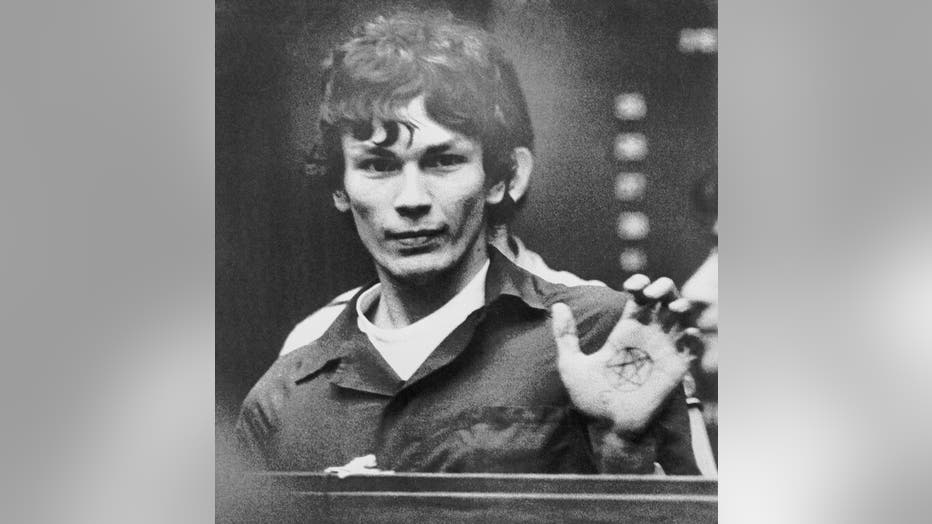 Suspect Richard Ramirez, accused of being the Los Angeles area serial killer called the "Night Stalker", flashes his left palm showing a pentagram, a symbol of satanic worship, at his former attorney Joseph Gallegos after he was replaced by 2 new att

After a four-year trial — one of the longest in U.S. history — Ramirez was sentenced to death in 1989. He also was convicted of many sexual assaults and burglaries.

In 2009, San Francisco police said DNA linked Ramirez to the April 10, 1984, killing of 9-year-old Mei Leung. She was killed in the basement of a residential hotel in San Francisco's Tenderloin neighborhood where she lived with her family.

Ramirez had been staying at nearby hotels.

Ramirez previously was tied to killings in Northern California. He was charged in the shooting deaths of Peter Pan, 66, and his wife, Barbara, in 1985 just before his arrest in Los Angeles, but he was never tried in that case.

In 2007, the U.S. Supreme Court refused to review the convictions and sentence. 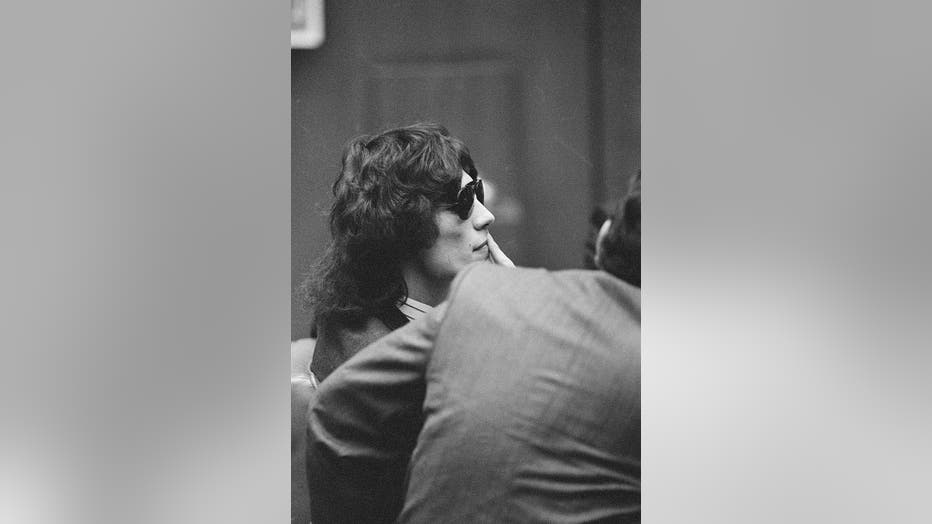 Most recently, Ramirez had been the center of attention due to the release of a Netflix documentary based on the Night Stalker.

Released last year, the "Night Stalker: The Hunt for a Serial Killer" was criticized by some viewers for its graphic nature.

"Watching the new Netflix ‘Night Stalker’ series. No need for them to include the victim crime scene photos, and slo-mo blood splatter shots, it’s not necessary," wrote one Twitter user who couldn’t stomach the grisly visuals.

The four-part series’ production featured gory re-enactments and displays of actual crime scene photos – everything true-crime fans generally love when exploring a mystery, but many were turned off.

"Not sure if I can get through all of #NightStalker on Netflix," admitted another viewer, adding, "This is tough viewing."

Meanwhile, some folks said they wouldn’t even subject themselves to the trauma, giving the title a pass. 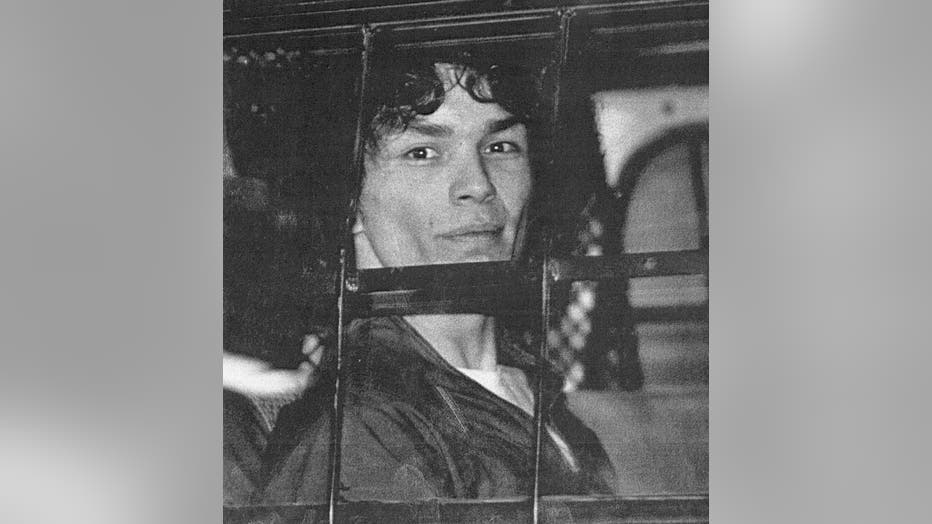 Richard Ramirez, accused of being the Los Angeles area serial killer called the "Night Stalker", looks out the window of a police van. Ramirez pleaded innocent at the hearing to 68 felony counts, including 13 murder charges. He was eventually found g

"Not sure I wanna see The Night Stalker doc series [because] I remember living through it and being terrified that summer of '85," tweeted writer Gary King, adding in another tweet, "that was a crazy summer."

"I love True Crime docs but even I’m finding this one extremely dark & twisted," wrote one. "Impossible to stop watching though!"

With additional reporting from FOX News and The Associated Press.