True Crime Files: Reflecting on the reign of terror left by the Night Stalker

He died in prison eight years ago, but not before writing a violent chapter in Southern California’s history in the 1980s.

Richard Ramirez, remembered by many as the "Night Stalker," still gives Californians chills at the mention of his name.

Gina Silva and Phil Shuman were granted permission for this FOX 11 True Crime Files story to look through the Night Stalker files, everything on the murder crime spree from June 1984 to August 1985.

"This is the actual trial exhibits, so I’m told there were like 40 boxes of this material," Shuman said.

"All of these envelopes represent a victim," Silva said, looking into each envelope.

PHOTOS: Exclusive look at evidence in the Night Stalker case obtained by FOX 11

Some of the crime scene photos we looked at were so gruesome, we could not show them on-air or online.

"I’m getting nauseous looking at some of this stuff," Shuman said. "It’s just so disturbing."

Each package reveals a twisted criminal history. FOX 11 found some of the handcuffs Ramirez used on his victims.

One of many items in his arsenal, which included knives and guns.

"It was a frightening time because they were random attacks, like all over," Shuman recalled.

Ramirez would break into homes through unlocked windows and doors.

"If there was a man, he would shoot the man first," Shuman recalled. "Then, he would sexually assault the women then he would ransack the place." 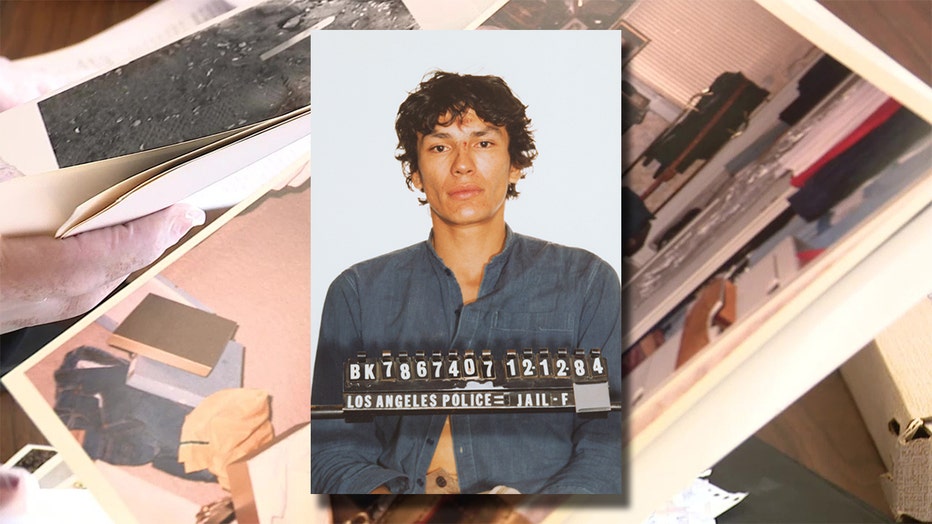 At the time of Ramirez’s reign of terror, Carrillo was a homicide detective with the Los Angeles County Sheriff’s Department. He and his partner Frank Salerno were assigned to solve the string of murders.

"In the beginning, there weren't a lot of people, especially cops that were believing that one person was responsible for all the murders," Carrillo said. "There were also some child abductions."

They didn’t know it then, but Ramirez was a sadistic serial killer, rapist, pedophile, burglar and santanist.

Carrillo was the first to suggest they were looking for one suspect. But his hunch was rejected by other detectives.

"I used to feel so bad for [Gil] because he used to come home so frustrated from work, you know, and I felt bad for him," said Pearl Carrillo, Gil’s wife.

"Nobody in criminal history ever been documented doing what he was doing, nor have there been any copycats, nobody's done it since," Gil Carrillo said.

In the archives, we found the AC/DC baseball cap Ramirez was seen wearing, the black leather jacket and sunglasses he often wore in court.

Some of the first sketches created from the memory of surviving victims and witnesses indicated that the suspect had stained and rotten teeth. Investigators also knew they were looking for a man who was wearing a specific type of sneaker.

A shoe print left at crime scenes was the first clue that only one killer was terrorizing California residents. They also knew one of the weapons was .22 caliber pistol.

That information was under wraps until then-San Francisco Mayor Diane Feinstein held a news conference and revealed every detail.

"The same ballistics I understand on more than a dozen murders," Feinstein said.

When Carrillo found out, he was furious.

As a result, Ramirez got rid of the shoes, got rid of a gun and then tossed them over the Golden Gate Bridge.

Soon, more clues would reveal the identity of the Night Stalker. A fingerprint was lifted from a stolen car he was driving and an acquaintance finally told police that the suspect’s name is Richard Ramirez.

With his image plastered everywhere, Ramirez was running out of places to hide.

On August 31, 1985, Ramirez tried to steal a red Mustang in East LA but the owner’s father wrestled him out of the car. Ramirez then ran and tried to take a woman’s car.

Angelina De La Torres’ husband Manuel heard the commotion and came out with a metal rod and hit Ramirez in the head twice, ultimately landing the Night Stalker behind bars.

The reign of terror finally came to an end when Ramirez was taken into custody.

He was found guilty of 13 counts of murder, five attempted murders, 11 sexual assaults and 14 burglaries and was ultimately sentenced to death.

For the detective who helped bring Ramirez to justice, it was a day unlike any other.

"I didn't pull the switch you know, it is what it is. I'm just grateful that I don’t have worry about an appeal. It’s over with… it’s done," Gil Carrillo said.

Through the ups and the downs of trying to place Ramirez behind bars (and on death row), his wife Pearl often reminds him what a great job he did.