Orange County District Attorney Todd Spitzer allegedly told a group of prosecutors discussing the case of a Black murder defendant that some Black men intentionally date white women to escape "bad circumstances or bad situations," according to a December memo written by a recently fired prosecutor.

Pete Hardin, a former federal and state prosecutor challenging Spitzer in the upcoming election, criticized the district attorney for using the n-word and another slur for Muslims while addressing the Iranian American Bar Association in November of 2019. Portions of the video surfaced on social media Tuesday -- with Spitzer already under fire for racially charged comments he made in an October meeting with prosecutors on whether to pursue the death penalty against a Black double-murder defendant.

In the video, Spitzer boasts how his political pressure on Orange County Superior Court Judge Roger Robbins got him transferred to another assignment after Spitzer objected to a plea deal the judge offered to Tyson Theodore Mayfield in a hate crime against a pregnant Black woman in Fullerton. Mayfield, who was a potential third-striker, faced a life sentence, but Robbins' plea offer gave the defendant a five-year prison term, which was later overturned on appeal. Mayfield is seeking to withdraw his guilty plea. 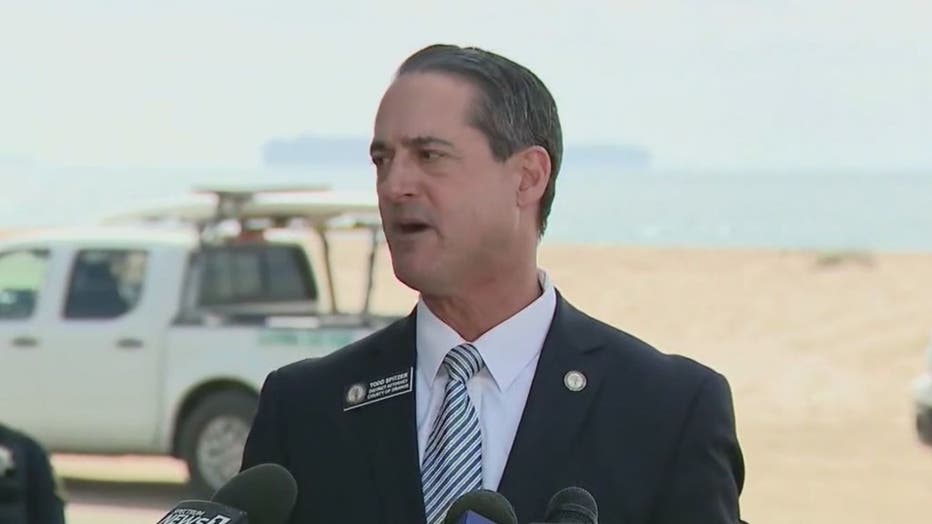 In the video, Spitzer shows the attorneys a PowerPoint presentation that includes the racial slurs allegedly used by Mayfield.

At one point, Spitzer looks around before repeating the expletives and slurs, "There's no kids here, so I'm good."

Spitzer alleged that Mayfield "slashed a Hispanic man's face open because he didn't have a cigarette... This is his third hate crime so I tell the judge, 25 to life. ... If there is a poster child for hate in this county, this is the dude."

Hardin noted that at one point in the video Spitzer refrained from using a expletive, but repeated his use of the n-word.

"Despite censoring other swear words, Todd Spitzer is eerily comfortable blurting out racial slurs directed at the Black and Muslim communities," Hardin said. "Spitzer's ignorance of the offensive nature of his racist language in the context of numerous documented racist tendencies disqualifies Spitzer from serving as our chief law enforcement officer. Todd Spizer is the embodiment of institutional racism and he must resign."

But Spitzer on Wednesday defended his comments.

"Hate is ugly and the words haters use and the violence they commit is even uglier," Spitzer said in a statement issued Wednesday. "It is hard to hear and it is hard to look at, but unless we confront it head on, hate will continue to fester and people of color will continue to suffer at the hands of haters."

Spitzer added, "In November 2019, I was invited by the Iranian American Bar Association to deliver the keynote speech in part because of the work I am doing to aggressively prosecute hate crimes in Orange County. The video shows me directly quoting the very words an evil white supremacist used while viciously attacking a pregnant African-American woman and threatening to kill her baby. This woman literally had to run for her life -- and her unborn baby's life -- from a real life monster covered in swastikas and SS lightning- bolt tattoos."

"I personally fought to prevent a slap-on-the-wrist sentence and made sure that this third-striker racist is spending his life behind bars instead of hunting people of color to attack," he said. "The selective and deceitful editing of the video intentionally misleads the public and, worse, shamefully dismisses the seriousness of a terrible hate crime I prosecuted on behalf of our community and the terror a young pregnant woman suffered because of the color of her skin. I am incredibly proud of the work we do to prosecute hate crimes and keep Orange County safe for everyone, and I will not be deterred from that important work by disingenuous political attacks."

The release of the video follows criticism raised this month against Spitzer over comments he made during a meeting with other prosecutors to discuss whether to seek the death penalty against Jamon Buggs, a Black double- murder defendant. Spitzer remarked during the discussion that he knew Black men in college who dated white women as a status symbol. Spitzer said he was making the point that Buggs may have killed the victim, who was white, because he mistook her for his ex-girlfriend, who is also white, and said that "cross-racial identification" is a reason many death penalty cases are overturned. Cross-racial identification usually comes into play, however, with witnesses who wrongly identify a suspect because of racial biases.

Spitzer said he ultimately decided to dump the death penalty in the case because the defense attorneys presented compelling evidence that the defendant suffered brain damage from a car crash and playing football in high school and college.

Spitzer and the county are also being sued by a former prosecutor who alleged that Gary LoGalbo, a retired prosecutor who was best man at Spitzer's wedding, would refer to him using racist epithets for people of middle-eastern heritage.