Logan said roughly 2.7 million vote-by-mail ballots had already been received and an additional 550,000 ballots or so were cast during the 10-day early voting period.

During an early Tuesday evening call with reporters, Logan said voter turnout stood at about 60% and growing, with a traditional surge of voters expected in the final three hours before the polls closed. Logan said he expected turnout would ultimately exceed the total in the 2016 presidential election, which was 69.45%.

"We won't know the full impact of the vote-by-mail process for the next couple of days, because we're going to have all of the ballots that are being walked into vote centers today, all of those returned at drop boxes and all of those that are even being dropped off at the postal service today," Logan said.

"But all indications are that we're going to have a healthy voter turnout in this election, I suspect higher than what we saw four years ago." 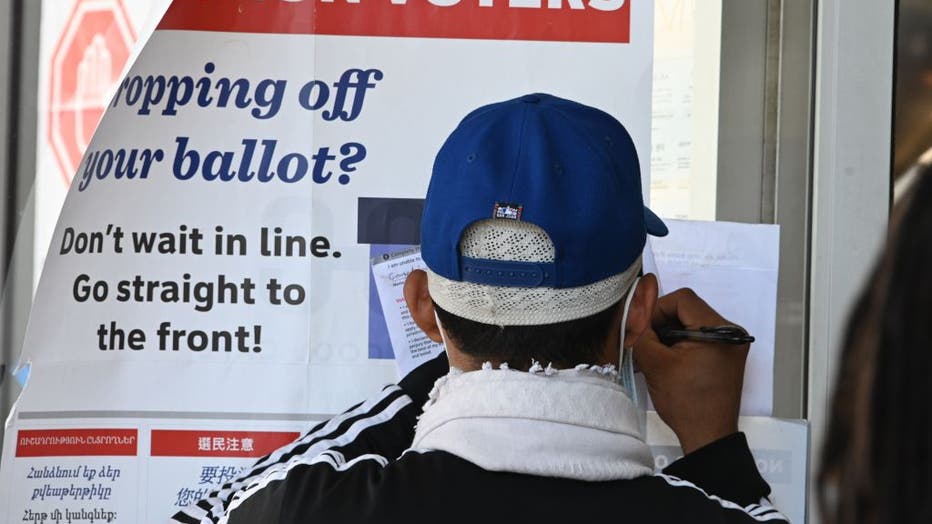 A man signs the back of his mail-in ballot before dropping it off at the vote center at the Hot & Cold Cafe in the Leimert Park neighborhood of Los Angeles, California on November 3, 2020. - Americans were voting on Tuesday under the shadow of a

Logan reminded voters that anyone in line at a polling place by 8 p.m.would have the opportunity to cast a ballot. He urged voters to check wait-times at various voting centers on the county's website at lavote.net, the vast majority of which seemed to be reporting waits of less than 15 minutes Tuesday evening.

Mail-in-votes also can be dropped at one of the county's 405 official drop boxes up until 8 p.m.

Ross Zelen, 28, of Sherman Oaks, was among a group of Loyola Law School students who spent the day volunteering as part of a student-led initiative that recruited students and alumni to serve as poll workers and in other capacities.

"This is our generation's time to step up and do the little things in addition to the big things ..." he said of volunteering on Election Day, a class holiday for the law school. "It really was a no-brainer for me."

He noted that voters coming to a polling place near the Rose Bowl in Pasadena were "following the rules and being very thoughtful and respectful of each other" in light of safeguards set up by election officials -- including voters and poll workers wearing masks and practicing social distancing -- as a result of the coronavirus pandemic.

Another student, Rebecca John, 25, of San Jose, said she has volunteered in previous elections and felt that she should help again because of her age. She said she encountered a "pretty big crowd," including a handful of first-time voters, that was "pretty eager," "extremely cooperative" and never really faced a line at the West Covina polling place where she had spent two days volunteering.

"We have really prioritized ensuring that every voter in Los Angeles County has the opportunity to vote safely and accessibly in this election," Logan said.

"One of the things that was particularly challenging in this election was securing facilities that were large enough and accessible enough to accommodate large numbers of voters under these precautions."

Because the county mailed ballots to every registered voter and offered early voting, Logan said a record number of ballots will be part of the initial counts reported after the polls close.   A tally of all vote-by-mail ballots -- including those deposited in drop boxes -- received prior to the Saturday before Election Day will be released within 30 minutes of the polls closing.

A short time later, a tally is expected to be released of all in-person ballots cast at vote centers ahead of Election Day.

"That first return is likely to include as many as 2 million ballots. The highest we've ever had in the first return in our first report in a past election was in 2016 with about 508,000, so what you are going to see in that first report of vote totals tonight is a much larger sampling of the entirety of LA County and the electorate in LA County," Logan said, noting that there are 5.7 million registered voters in the county.

"We still have several days and week seven ahead to go through and ensure that every valid vote is counted in this election prior to the point at which we will certify the election."

According to the Secretary of State's Office, county election officials this year were authorized to begin opening and processing vote-by-mail ballots up to 29 days before Election Day, although no results can be released until after the polls close. In past years, counties could not begin processing any ballots until 10 days before an election.

The rules were adjusted this year in light of the COVID-19 pandemic and the anticipated surge in vote-by-mail balloting.   The shift to regional voting centers instead of local precincts means it will be more difficult for the public and media outlets to track what percentage of votes have been counted on election night and how many remain to be tallied.