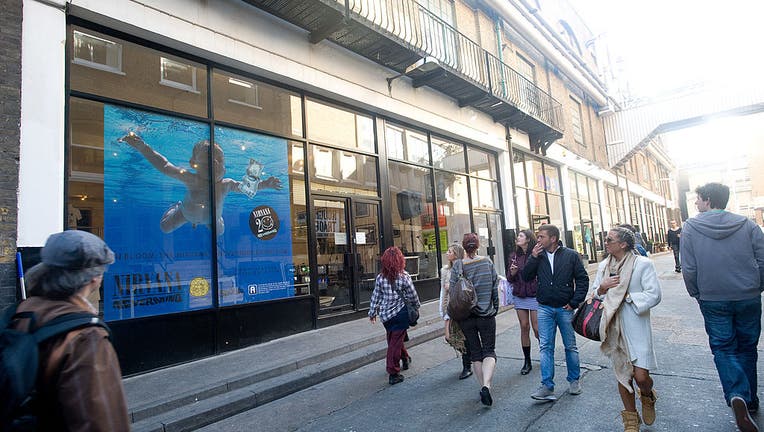 LOS ANGELES - A Los Angeles man pictured as a naked baby over 30 years ago on the cover of the groundbreaking Nirvana album "Nevermind" Monday filed a notice of intent to appeal a judge's decision to toss his lawsuit against the group and others for alleged child sexual exploitation.

The suit was dismissed by U.S. District Judge Fernando Olguin on Friday after ruling that the complaint had been lodged in L.A. federal court after the 10-year statute of limitations had expired, according to the judge's order.

The lawsuit argued that the cover image suggests a "sex worker grabbing for a dollar bill."

Elden's lawyers filed the notice of appeal with the U.S. 9th Circuit Court of Appeals.

"Spencer's victimization as a child remains frozen in time," Margaret Mabie, one of Elden's lawyers, said in a statement provided to City News Service on Monday. "His childhood self continues to be invaded and he will be repeatedly victimized as long as the `Nevermind' cover continues to be distributed."

Nirvana's attorney Bert H. Deixler did not immediately respond to a request for comment.

According to the lawsuit, the defendants "knowingly produced, possessed and advertised commercial child pornography depicting Spencer, and they knowingly received value in exchange for doing so. ... Despite this knowledge, defendants failed to take reasonable steps to protect Spencer and prevent his widespread sexual exploitation and image trafficking."

Elden's parents never signed a release authorizing the use of the photos taken of the 4-month-old baby in a Pasadena aquatic center in 1990 and Elden received no compensation, the suit alleges.

But defendants including Courtney Love, executor for the estate of late Nirvana leader Kurt Cobain argued in their court papers that Elden seemed to enjoy being the "Nirvana baby" and even has a "Nevermind" tattoo.

"He has re-enacted the photograph in exchange for a fee, many times; he has had the album title ... tattooed across his chest; he has appeared on a talk show wearing a self-parodying, nude-colored onesie; he has autographed copies of the album cover for sale on eBay; and he has used the connection to try to pick up women," according to a defense motion to dismiss.

Elden sought a jury trial and $150,000 from each of the 15 defendants or unspecified damages to be determined.

The cover of "Nevermind" — released in 1991 by the Geffen/UMG label — depicts a naked baby swimming underwater, seemingly toward a fish hook with a dollar bill attached. It is among the best-known album covers in rock.

Elden contends that the defendants "used child pornography depicting Spencer as an essential element of a record promotion scheme commonly utilized in the music industry to get attention, wherein album covers posed children in a sexually provocative manner to gain notoriety, drive sales and garner media attention and critical reviews."

As a result, Elden "has suffered and will continue to suffer lifelong damages," according to the complaint.

Geffen Records originally shipped 46,521 copies of "Nevermind" to retailers in hopes of eventually selling 200,000 copies. The album, a cornerstone of the grunge era, eventually sold over 30 million copies.

In an interview last year with the Vulture website, former Nirvana drummer Dave Grohl commented on Elden's suit: "Listen, he's got a `Nevermind' tattoo. I don't."