President Joe Biden was among those mourning Nichelle Nichols' death, saying in a statement, "In Nichelle Nichols, our nation has lost a trailblazer of stage and screen who redefined what is possible for Black Americans and women. With a defining dignity and authority, she helped tell a central story that reimagined scientific pursuits and discoveries."

LOS ANGELES - Flowers were placed on the Hollywood Walk of Fame star of Nichelle Nichols Monday, two days after the actress best known for her landmark role of communications officer Lt. Nyota Uhura on "Star Trek" died at the age of 89. 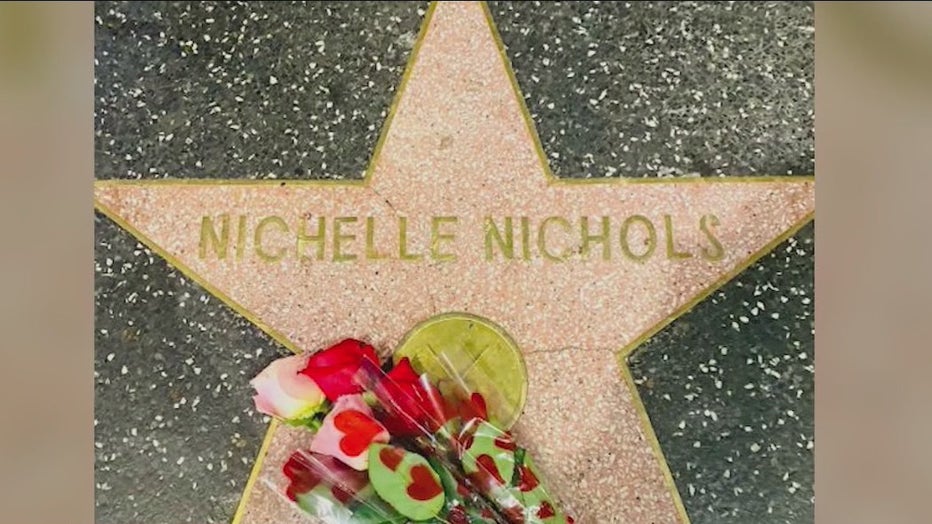 The makeshift memorial was located at 6635 Hollywood Blvd., near Cherokee Avenue. Nichols received the star in 1992.

President Joe Biden was among those mourning Nichols' death, saying in a statement, "In Nichelle Nichols, our nation has lost a trailblazer of stage and screen who redefined what is possible for Black Americans and women. With a defining dignity and authority, she helped tell a central story that reimagined scientific pursuits and discoveries.

"And she continued this legacy by going on to work with NASA to empower generations of Americans from every background to reach for the stars and beyond. Our nation is forever indebted to inspiring artists like Nichelle Nichols, who show us a future where unity, dignity, and respect are cornerstones of every society."

Born Dec. 28, 1932 in the Chicago suburb of Robbins, Illinois where her father Samuel was mayor and raised in the South Side Chicago neighborhood of Woodlawn, Nichols was a successful stage actress and had toured as a singer with jazz legends Duke Ellington and Lionel Hampton when she was cast as Uhura in "Star Trek," which debuted on NBC in 1966. It was one of the first examples of a prominent, nonstereotypical role for a Black woman on American television.

In an interview with the Television Academy for its Archive of American Television, Nichols said she was going to leave "Star Trek" after its first season to perform in a Broadway-bound musical, handing creator Gene Roddenberry a letter of resignation.

The following Saturday, she attended an NAACP fundraiser in Beverly Hills when an organizer informed her "her biggest fan" was in attendance and was desperate to meet her.

"I thought it was a Trekkie, and so I said, 'Sure.' I looked across the room and whoever the fan was had to wait because there was Dr. Martin Luther King walking towards me with this big grin on his face," Nichols said. "He reached out to me and said, `Yes, Ms. Nichols, I am your greatest fan.' He said that `Star Trek' was the only show that he, and his wife Coretta, would allow their three little children to stay up and watch."

After telling King about her plans to leave the series to take the role in the musical, "I never got to tell him why, because he said, `You cannot, you cannot... for the first time on television, we will be seen as we should be seen every day, as intelligent, quality, beautiful, people who can sing dance, and can go to space, who are professors, lawyers.

"If you leave, that door can be closed because your role is not a Black role, and is not a female role; he can fill it with anybody even an alien. At that moment, the world tilted for me. I knew I was something else."

Nichols' non-"Star Trek" roles included portraying the mother of celebrity dentist Dr. Ted Brooks (Cuba Gooding Jr.) is the 2002 film comedy "Snow Dogs" and as the title character in the 2006 action comedy "Lady Magdalene's," which she also choreographed and was an executive producer.

Nichols had a recurring role on the NBC superhero series "Heroes" in 2007 as the matriarch of a New Orleans family financially and personally devastated by Hurricane Katrina.

Nichols received an outstanding guest performer in a drama series Daytime Emmy Award nomination in 2017 for her portrayal of the aging mother of Neil Winters (Kristoff St. John) in the CBS daytime drama, "The Young and the Restless."

Nichols helped NASA recruit some of the first women and minority astronauts.

Nichols' death was announced Sunday by her son Kyle Johnson on Facebook.

"I regret to inform you that a great light in the firmament no longer shines for us as it has for so many years," the post read.

"Last night, my mother, Nichelle Nichols, succumbed to natural causes and passed away. Her light however, like the ancient galaxies now being seen for the first time, will remain for us and future generations to enjoy, learn from, and draw inspiration.

"Hers was a life well lived and as such a model for us all."