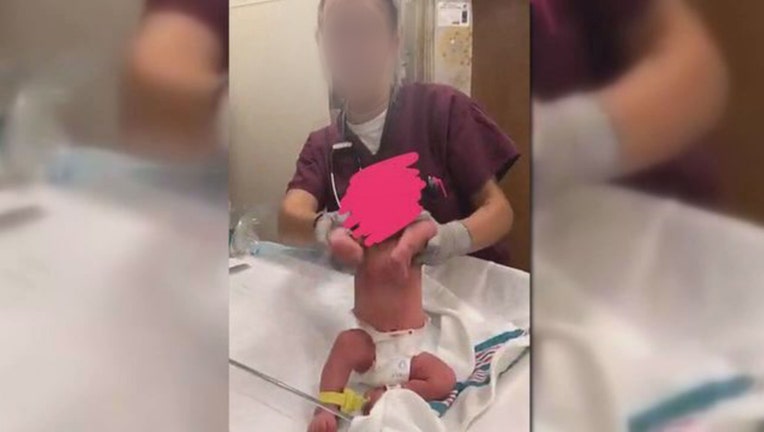 A Facebook user shared a now-viral post on Monday of screenshots from Snapchat. One photo shows an employee giving the middle finger to a newborn, with the caption, "How I currently feel about these mini Satans." Another photo shows the employee holding the baby up and making the baby dance, with the baby's face blurred out.

The post with the photos attached said the following:

"I'm just sharing someone's post in hopes that these childish girls get reprimanded and lose their jobs.

'A girl I went to high school with is a navy nurse and this is how her and her (expletive) friend treat the babies that have just been born. My blood is literally boiling and I want to snitch bc that is someone's child. The first pic is her friend who is making the baby dance and she's playing rap music in the background. I'm LIVID and I'm snitching bc she should get fired from her job but idk how to go about it. Pissed isn't even the words."

They work at the naval hospital in Jacksonville, FL. Call, email, do whatever it takes to get through to administration!!'"

Action News Jax also received exclusive video of what appears to be a nurse inappropriately handling a newborn.

The hospital posted a statement on its Facebook page announcing the employees have been removed from patient care and the hospital is notifying the patient's parents.

Naval Hospital Jacksonville's Commanding Officer sends: We are aware of a video / photo posted online. It's outrageous, unacceptable, incredibly unprofessional, and cannot be tolerated. We have identified the staff members involved. They have been removed from patient care and they will be handled by the legal system and military justice. We're in the process of notifying the patient's parents.

The hospital said the staff members have been removed from patient care and they will be handled by the legal system and military justice.