YEREVAN, Armenia - Speaker of the House, Nancy Pelosi, and other US politicians made a historic trip to Armenia, just days after Azerbaijani forces invaded the country.

Speaker Pelosi condemned what she called ‘illegal’ attacks by Azerbaijan on sovereign Armenian territory and promised to support Armenia’s security and democracy.

Pelosi met with Alen Simonyan, president of Armenia’s parliament, and told reporters afterward that "Our meeting had a particular importance to us because the focus was on security following the illegal and deadly attacks by Azerbaijan on the Armenian territory."

"For a long time, decades, in the Congress, in a bipartisan way, we have tried to hold Turkey responsible, as well as Azerbaijan, for the conflict that exists in Nagorno-Karabakh," Pelosi stated.

"As Californians, all three of us, recognize that 40% of all Armenian-Americans live in California, so we feel this is a family visit for us," Pelosi added.

"The House of Representatives has a resolution authored by us that says we condemn the actions by Azerbaijan. That they must cease and desist. I'm hopeful that we will take that resolution up soon. As to our commitment to Armenia, we will continue to support the integrity of the democracy or Armenia and the borders and resist any effort to have those borders changed," said Rep. Jackie Speier, who is of Armenian descent.

The United States played a leading role in the recent ceasefire due to Russia, the regional peacekeeper, being distracted with its war in Ukraine.

"The United States ... has clearly and has long stated that there can be no military solution to the conflict. We continue to watch the situation closely and we continue supporting a negotiated, comprehensive and sustainable solution to all issues relating to the Nagorno-Karabakh conflict," Pelosi said.

The Azerbaijan Foreign Ministry criticized her comments and released a statement that read, "Pelosi’s baseless and unfair accusations against Azerbaijan are unacceptable. We emphasize with regret that Pelosi, who speaks of justice, has not purposefully shown any position until today regarding the policy of aggression of Armenia against Azerbaijan, the occupation of the territory of Azerbaijan for almost 30 years, the ethnic cleansing of hundreds of thousands of Azerbaijanis and other similar grave crimes, for which Armenia is responsible."

During the delegations' trip, they visited the Armenian Genocide Memorial where they honored the lives of the 1.5 million people who died at the hands of the Ottoman Empire in 1915.

According to Pelosi's office, she is the highest-ranking U.S. official to visit Armenia since the Republic achieved its independence.

"For the U. S., at a time like this to be visibly present there at the level of Speaker Pelosi is wonderful" said Salpi Ghazarian, director of USC’s Institute of Armenian Studies.

As a result of Azerbaijan's recent attack on Armenia, more than 200 troops from both sides have died, civilians were injured and buildings and homes were destroyed. According to reports, the Armenian towns of Vardenis, Jermuk, Goris and Tatev came under Azerbaijani fire. 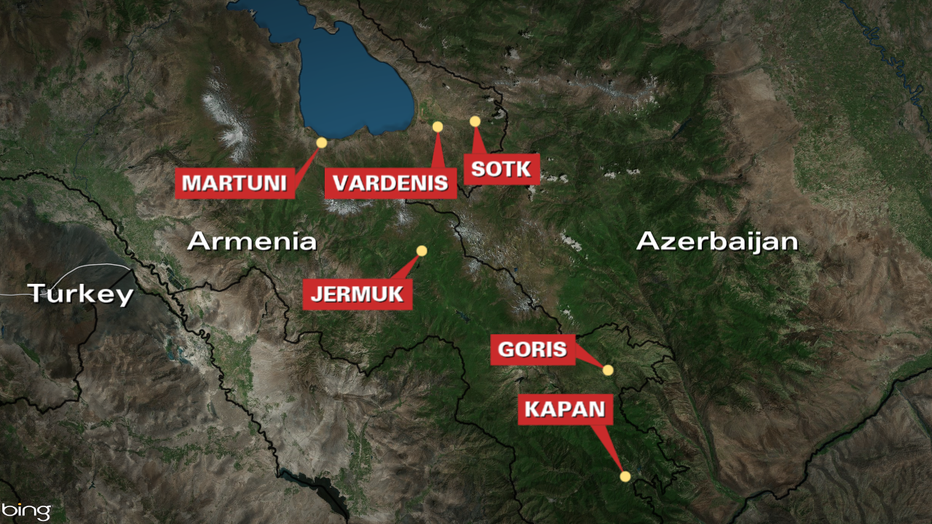 "This aggression, a week ago, was by Azerbaijan on the Republic of Armenia on Armenia's borders... an internationally recognized order that cannot be invaded by a foreign country. And so now the international community is free to not just speak about, but also to take steps to stop aggression against Armenia and Armenians, and to call Azerbaijan out and on the degree of horrid violence that it is perpetrating against the soldiers as well as civilians," Ghazarian stated.

A ceasefire was reached Wednesday, Sept. 14.

The recent attack comes nearly two years after Azerbaijan launched a full-scale attack on the territory of Artsakh (Nagorno-Karabakh), starting a six-week war that killed more than 6,600 people and ended with a Russia-brokered peace deal.

"In order to stop violence of this kind, two sets of things have to happen. One is that on the ground, governments, countries, businesses, corporations, organizations have to say this is not okay, and they have to do that with their feet, with their money, with their power, with their ability to say ‘This is not how we will continue to interact with an aggressor that uses this kind of violence against its neighbors and against people that considers its own citizens.’ Corporations can leave. Azerbaijan's input of energy into the world market is minimal. That is not a reason to continue to back a dictatorship like this that destabilizes the whole region," Ghazarian added.

Prior to Pelosi's arrival, the Armenian National Committee of America (ANCA) sent a letter urging her to immediately stop sending US taxpayer money to Azerbaijan, which is aiding their military and weapons used to fight against Armenia.

According to a budget analysis compiled by the Security Assistance Monitor, the United States sent over $100 million in aid to Azerbaijan between the years of 2018 and 2019. In comparison, the US sent Armenia $11 million during the 2018-2019 fiscal years.

"The urgency of our request is underscored by the brutal 44-day war and ethnic-cleansing campaign that Azerbaijan launched in 2020 against Artsakh and, more recently, by the renewed attack into the Republic of Armenia over the past week. In the wake of this aggression, Congress must stop shipping US tax dollars to Azerbaijani President Aliyev's armed forces," the statement from the ANCA read.

Rep. Adam Schiff, who represents Burbank, has also asked the US Congress to cut off US financial aid to Azerbaijan.

"There is no reason for the US to be supporting a country that is unilaterally making war on its neighbor, on a democratic neighbor, an alley," Schiff told FOX 11. "This was all Azerbaijan, unprovoked attack on Armenia. I think Azerbaijan believes that Russia and the rest of the world may be distracted with the war in Ukraine and they can get away with this and we have to show that the United States is not distracted."