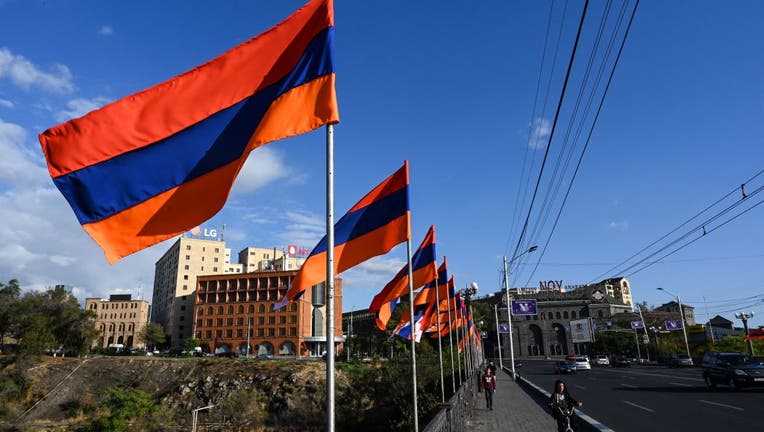 A boy cycles on a bridge decorated with flags of Armenia and the breakaway Nagorno-Karabakh region in Yerevan on October 7, 2020. (Photo by -/AFP via Getty Images)

LOS ANGELES - Multiple Southern California cities are standing up and showing their support for Armenia and the Republic of Artsakh during their time of war with Azerbaijan.

Meanwhile, the Gardena City Council unanimously passed a resolution condemning Azerbaijan’s aggression towards Armenia. Resolution No. 6484, "Standing in Solidarity with the People of Armenia and Artsakh to Condemn Azerbaijan’s Aggression" highlights three items.

The resolution calls on the White House to condemn Azerbaijan for its latest violation of the ceasefire, calls on CalSTRS and CALPERS to divest from any and all Turkish-issued government bonds, and vows to refuse any in future business dealings with Turkey and Azerbaijan.

In Orange County, the Santa Ana City Council issued a proclamation denouncing the attacks on Artsakh by Azerbaijan.

“The City Council at their Oct. 20 meeting directed staff to issue the proclamation and requested a resolution. City staff will return to the City Council with a resolution denouncing the attacks on Artsakh for a vote at the Nov. 17, 2020, meeting,” a statement from the council read.

Several California cities and local politicians have been calling for the recognition of Artsakh as well as for the US government to intervene and help stop the war.

The Armenian-American community is urging the US government to sanction Turkey and Azerbaijan.

Heavy fighting between Armenia and Azerbaijan over the territory of Nagorno-Karabakh (also known as Artsakh) broke out on Sept. 27.

Attempts of a ceasefire have been broken three times. The latest U.S. brokered ceasefire, which went into effect, Oct. 26 was broken within hours.