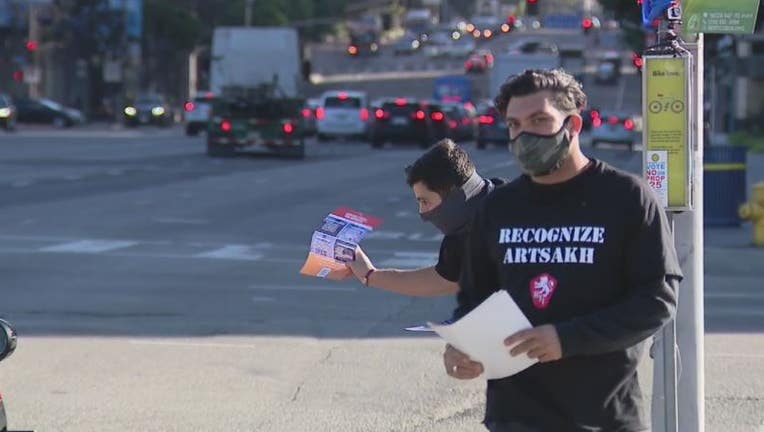 LOS ANGELES - The Armenian-American community in Los Angeles is taking action to draw attention to the war between Armenia and Azerbaijan.

The Armenian Youth Federation (AYF) has organized a week long demonstration, including a hunger strike, in order to raise awareness and demand justice.

The Armenian Youth federation organized a week long demonstration to draw attention to the ongoing war between Armenia and Azerbaijan.

“I believe that a country that was founded on the principles of life, liberty, and the pursuit of happiness and a country that upholds its humanitarian principles, I believe it is the responsibility of the Unites States government to step in,” said one AYF member participating in the demonstration.

At the end of the hunger strike, a community-wide march will be held on Sunday starting from the Federal Building on 11000 Wilshire Blvd. to the Azeri Consulate.

Hour 24 of the #AYFHungerStrike is now complete and has brought our community together, including artists and activists, calling for an end to Turkish and #AzeriAggression. Our voices are united and powerful in the face of adversity. While our soldiers fight as the first army of the Armenian nation, we join the second in rallying for peace from the United States. The fight continues and we will push forward till the end #WithOurSoldiers. #RecognizeArtsakh #SanctionTurkey #SanctionAzerbaijan

Large rallies have been held throughout Los Angeles and even across the world as the Armenian community, and its supporters, bring attention to the humanitarian crisis happening in the region of Artsakh.

Heavy fighting between Armenia and Azerbaijan over the territory of Nagorno-Karabakh (also known as Artsakh) broke out Sept. 27.

Attempts of a ceasefire have been broken three times. The latest U.S. brokered ceasefire, which went into effect, Oct. 26 was broken within hours.

In a bid to save the deal, U.S. Secretary of State Mike Pompeo spoke separately to Azerbaijani President Ilham Aliyev and Armenia’s Prime Minister Nikol Pashinyan on Tuesday. He pressed them to “abide by their commitments to cease hostilities and pursue a diplomatic solution to the Nagorno-Karabakh conflict,” the State Department said, emphasizing that “there is no military solution to this conflict.”

“I pressed the leaders to uphold their commitments to cease hostilities and pursue a diplomatic solution in the Nagorno-Karabakh conflict. Armenians and Azerbaijanis deserve to live in peace,” Pompeo wrote in a tweet.