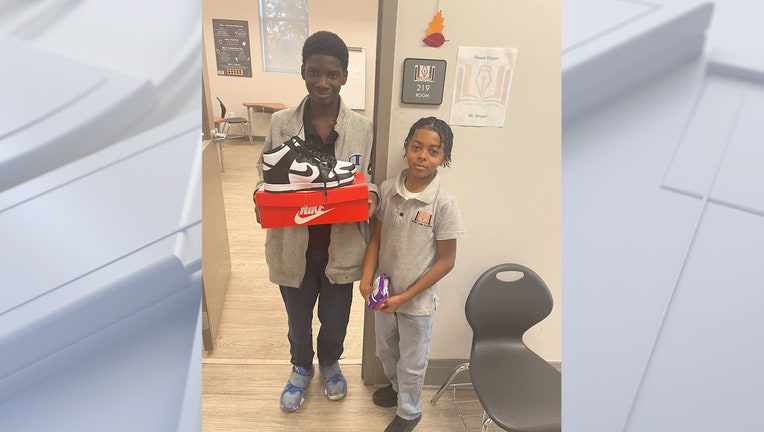 BUFFALO, N.Y. - A touching gesture from a middle school student is melting hearts all over the internet.

Last week, Romello Early bought his friend, Melvin Anderson, a pair of new shoes after Melvin was getting picked on by other students at Buffalo Creek Academy in Buffalo, New York.

Bryant Brown, Jr., the school’s dean of culture, captured the moment and posted it on his Facebook page.

RELATED: Preventing and stopping bullying where is happens

"My student Melo told me he was tired of other students picking on Melvin about his shoes," Brown wrote. "Melo used his allowance and bought Melvin some shoes."

Brown said he had been informed that Melvin was getting teased by other students after getting his shoes dirty.

"His shoes weren’t up to par," Brown told FOX Television Stations. "Melvin likes to run in the mud and get his shoes dirty."

Romello spoke to reporters about his act of kindness.

"I could tell it was upsetting him," Romello told WGRZ. "It just put a real bad ache in my stomach to see somebody have to go through that, and to be to be picked on just based off appearance."

"I had saved up my allowance, and so I asked my mom to take me to the shoe store to get Melvin some shoes, and the next day I came and gave them to him," he continued.

"I'm really appreciative of what he did for me," Melvin also told the news outlet. "I'm doing chores at home so I can earn some money to try and pay him back for what...what he did for me."

"It’s not often that you see children give up their allowance to someone else and that let me know, Romello was protecting and trying to change the narrative for his friend Melvin," Anita James told FOX Television Stations.  "To be so passionate at 12 years old really says a lot, but Romello is passionate in all aspects of his life family, basketball and friends."

Brown said he was immensely touched by the gesture.

"I’m glad it touched the world. It’s still affecting me today," he said.

Brown said in response to the incident, the school has launched an anti-bullying campaign to raise money to help other students like Melvin.

According to StopBullying.gov, about 20% of students ages 12-18 experienced bullying nationwide.

Bullying is described as unwanted aggressive behavior, observed or perceived power imbalance, or repetition or high likelihood of repetition of bullying behaviors.

All states do have anti-bullying legislation. Schools do have a legal responsibility to respond to unwanted behaviors, according to federal laws.