PREVIOUS COVERAGE: A 19-year-old man was shot and killed in South LA over the weekend. Police say they thought he was holding a rifle, but the weapon turned out to be an airsoft gun.

LOS ANGELES - The Los Angeles Police Department has released body camera footage from an incident in which officers shot and killed a 19-year-old man in South Los Angeles they believed was holding a rifle.

A video the department released Saturday included multiple 911 calls prior to the incident, as well as security and body camera footage from at least four different angles of the scene. The shooting happened back on Sept. 17. Officers said that when they responded to reports of domestic violence at a home at Grand Avenue and 102nd Street, 19-year-old Louis Herrera of Los Angeles came out of the home with what appeared to be a rifle. He was shot. Later that night, the LAPD announced that the gun officers originally thought was a rifle was, in fact, an airsoft gun.

Newly-released 911 audio shows that a man identified by dispatchers as "Luis" called emergency services at least twice that day.

"My dad is drunk, and he started beating on my mom, and I tried to get involved, and now he attacked me," the caller said in one call. "My dad… I'm all bloody because of him," he said in another. 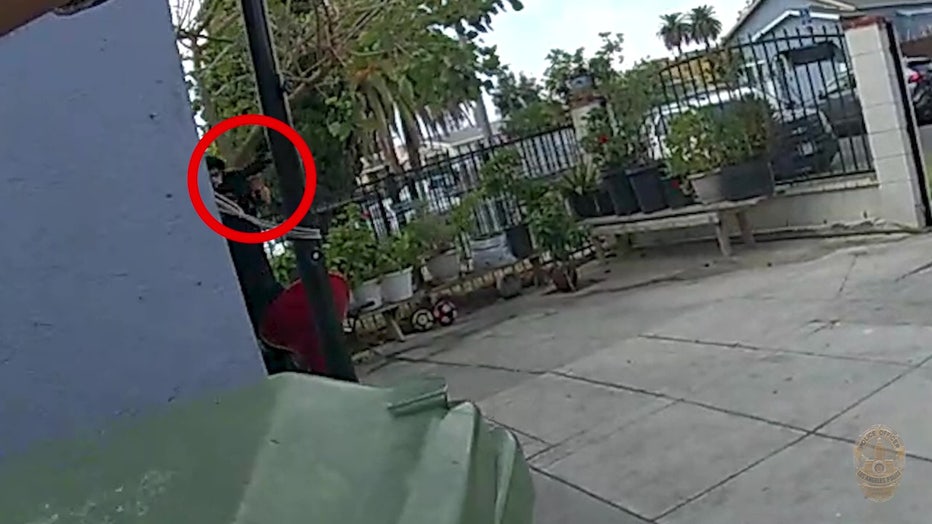 In security footage from the home, LAPD officers can be seen entering the property from a front gate before reacting to something off-screen, drawing their weapons. Another person is then seen entering the frame before falling to the ground with what appears to be a rifle in his hands. Officer body camera footage shows that when officers approached the front door, a person came out of the house, with the device in his hands, as officers ran around the corner of the building, hiding behind trash cans for cover.

"Put that down, put that down," officers are heard yelling at the man before eight shots are heard. "Let go of the gun," an officer is heard yelling at the man on the ground. It's unclear from the video where the man's hands were. Video from officers who arrived later shows the arrest. In that video, when officers roll the man over to handcuff him, video shows they found another item that looked like a pistol. Officers determined that this was also an airsoft gun.

"It's a toy. Why did they assault him," an off-camera voice is heard yelling, saying that the man officers had shot was her son.

LAPD said it found no evidence of domestic violence between the parents at that residence, as the 911 caller said. The department is still investigating the shooting.