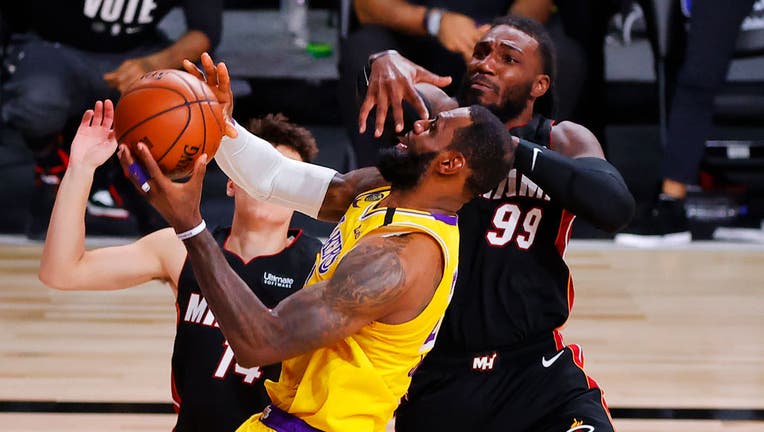 Jae Crowder #99 of the Miami Heat defends LeBron James #23 of the Los Angeles Lakers during the fourth quarter in Game Four of the 2020 NBA Finals at AdventHealth Arena at the ESPN Wide World Of Sports Complex on October 6, 2020 in Lake Buena Vista, (Getty Images)

LOS ANGELES - The Los Angeles Lakers will seek to win a record-tying 17th championship Friday night when they face the Miami Heat in Game 5 of the NBA Finals.

The Lakers took a three-games-to-one lead in the best-of-seven series Tuesday with a 102-96 victory, with LeBron James scoring 11 of his game-high 28 points in the fourth quarter.

The Lakers never trailed after James broke the last of the game's nine ties with a 3-point play with six minutes, eight seconds to play, then made two free throws 35 seconds later to give the Lakers an 88-83 lead.

The Heat cut the deficit to 90-88 on Tyler Herro's free throw with 3:39 left. The Lakers responded with a 10-3 run begun by Kentavious Caldwell-Pope's 3-point basket and layup.

Following Jae Crowder's 3-point basket for Miami, the Lakers concluded the run with a running finger-roll layup by Rajon Rondo and a 3-point basket by Anthony Davis to give them a 100-91 lead with 39.5 seconds remaining.

"To me this series is far from over," Lakers coach Frank Vogel said
Thursday. "We've got a lot of work to do. This is a great basketball team that we're playing and my focus is solely on all the little details that go into what we have to do to get one more win."

History is on the Lakers side. Of the 35 previous teams to take 3-1 leads in the finals, only the 2016 Golden State Warriors failed to win the title, losing to the James-led Cleveland Cavaliers.

"Ain't nobody thinking about going home over here," Heat forward
Jimmy Butler said Thursday. "It's just win, so there is no pressure. We're expected to win. That's our job. It's not win or go home, it's win or win. That's how we think about it."

Miami point guard Goran Dragic is doubtful for Friday's game, coach Erik Spoelstra said Thursday. He has not played since tearing the plantar fascia ligament in his left foot in the second quarter of the Heat's 116-98 loss in Game 1 Sept. 30.

The Lakers will wear their "Black Mamba" uniform in Game 5, which like the entire NBA postseason will be played at the ESPN Wide World of Sports Complex in Lake Buena Vista, Florida, due to the coronavirus pandemic.

The Lakers had initially planned to wear their purple "Statement"
uniform for Game 5, but switched to the "Black Mamba" uniform because Friday's game could be the last of the series.

The Lakers are the designated home team Friday and have the choice of which uniform to wear. They would also wear the Black Mamba uniform if a seventh game is necessary.

The Lakers are 4-0 in the playoffs wearing the uniforms designed in part by the franchise's late legend Kobe Bryant, including a 124-114 victory in Game 2 last Friday.

"We just think that for all the things that happened this season,
with our team specifically and our organization, that to be able to close it out in the Black Mamba uniforms will just make it all worth it," Davis said.

To James, the uniform "means something, something more than just a uniform."

"It represents an individual who gave the franchise 20 years of his
blood, sweat and tears and his dedication to his craft, both on and off the floor, to make that franchise be proud of him, and hopefully vice versa," James said.

"Until you get your hands on them, you don't get to see the detail in them,  James said.

The Boston Celtics have won an NBA-record 17 championships, the most recent in 2008 when they defeated the Lakers in six games. They have had sole possession of the lead in championships since 1962 when they won their sixth, their fourth in a run of eight consecutive titles.

The Lakers are credited with the first of their 16 NBA championships for their 1949 Basketball Association of America title, their first season in the league. The league merged with the National Basketball League later in 1949 to create the NBA.

The NBA incorporates titles and statistics from the BAA's three seasons in its records, but not the NBL's. The Lakers had won the 1948 NBL title.

The Lakers also won championships in 1950 and from 1952 through 1954. They didn't win another until 1972, losing each of their next eight finals appearances, including four in seven games. Seven of the Lakers finals losses during that stretch were against the Celtics.

Shaquille O'Neal and Bryant teamed to lead Phil Jackson-coached teams to titles from 2000-02. Bryant and Pau Gasol led the Lakers to championships in 2009 and 2010, defeating Boston in seven games to win the most recent one.