A Los Angeles rabbi traveled to Ukraine on a humanitarian mission to help the Jewish community in Ukraine in the wake of the Russian invasion.

A Los Angeles rabbi traveled to Ukraine on a humanitarian mission to help respond to the needs of the Jewish community in Ukraine following the Russian invasion.

Rabbi Noah Farkas, the President and CEO of the Jewish Federation of Greater Los Angeles, is part of a delegation on a humanitarian relief trip to Poland at the Ukraine border.

"The Jewish Federation has had a global partnership for almost 100 years with the Jewish communities across the world, including in Ukraine. When we found out the invasion was starting and refugees were beginning to leave cities in the east and heading west, we immediately knew we had to spring into action. We launched a major fund inside the Jewish community, from the Jewish community in Los Angeles," said Farkas.

During the trip, Rabbi Farkas is aiding relief efforts.

"I wanted to make sure we came with a specific purpose, a purpose that felt right and was on a mission with our charitable organization. [We are there] to help refugees find food, have in-home health care, help find housing here in Poland, which is now incredibly expensive because they're out of space, and to find them [refugees] transportation, rent buses and for those who wish to go to Israel, [we are] helping them immigrate to Israel as well," he said. 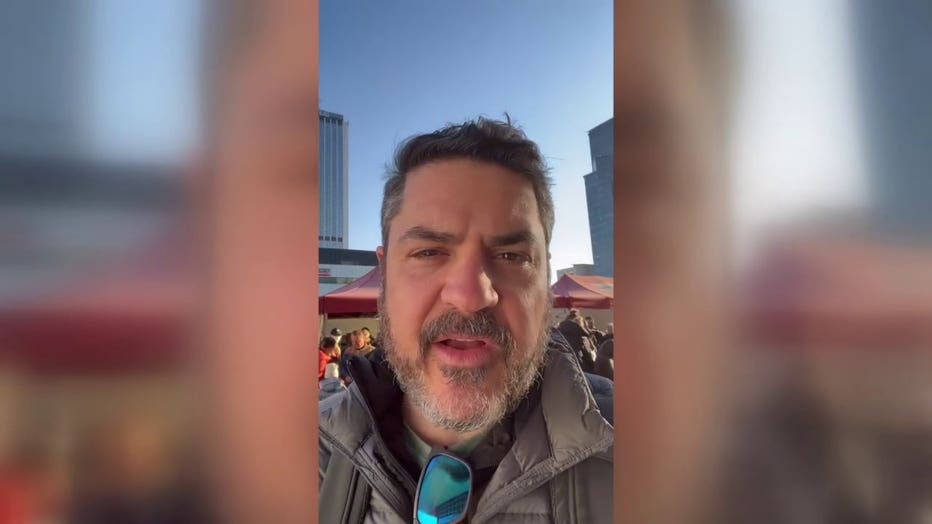 Farkas said he has had the opportunity to speak with some of the refugees.

Farkas said he has mostly encountered women and children, or elderly and ill refugees. He said the vast majority of men have had to stay behind.

"There are hundreds, if not thousands, of people crossing every day. There's a tent city built by the world, by Israel. We saw Spain. We saw Sweden, and we saw the Sikh community," he said.

Farkas said Ukraine has a population of 200,000 Jewish people. In 1900, Odesa [city in Ukraine], was the third-largest Jewish community in the world.

"There was a renaissance. In fact, the Federation which we are a part of, helped fund new meeting houses, and rebuild synagogues there," he said.

However, he said the landscape is changing in Ukraine now due to the war.

"All that has changed in the last 20 days. The invasion from Russia and with nearly three million refugees now pouring west out of Ukraine, the global map of Jewish life is changing again, and for me, personally, and for many of these Ukrainians, it brings back very haunting memories. Jews have been haunted by being a dispossessed people for thousands of years, and watching these women and children, they could have been my grandparents, my great-grandparents. They could have been friends of mine," he said.

Farkas said the despair is being met with hope at the border.

"The wave of despair. The wave of sadness. The wave of exhaustion and fear is only being met by an equal wave of humanity, of love and hope. In these darkest moments, you'll also find the brightest lights. To be part of a system that's funding [efforts in Ukraine], it's a real privilege to bear witness to history," he said.

Farkas said Ukraine needs volunteers who speak Russian, Ukrainian and also understand trauma at this time because they don't have space to house volunteers without translation skills. However, Farkas said people can help from home by donating to the country, or to organizations like the Jewish Federation, which is raising funds.

Farkas said 100% of all funds raised by The Jewish Federation will go to relief efforts for the work being done in collaboration with partners at the American Jewish Joint Distribution Committee (JDC) and the Jewish Agency for Israel.

Specifically, funds are providing urgent humanitarian aid and financial assistance to poor Jewish elderly and families, delivering food, medicine, winter relief and emergency assistance, dispatching mobile medical units to get supplies where they are needed most, and transporting people out of the conflict areas.

Farkas is returning to the U.S. on March 16.

Farkas also spoke via live stream during the service at Sinai Temple in Beverly Hills Tuesday night. The temple held an interfaith prayer service for peace in Ukraine.