LOS ANGELES - A lively primary election campaign for Los Angeles mayor is in the homestretch Friday, with Tuesday's deadline looming for voters to choose from among nine candidates in a race widely seen as a two-candidate duel in the effort to replace termed-out Eric Garcetti.

Rep. Karen Bass, D-Los Angeles, and billionaire real estate developer Rick Caruso are the clear front-runners according to polls, with a recent tally showing Caruso leading with 37% of likely voters' support and Bass close behind with 35%.

The same poll, which was released on May 20 by Communities United for Bass for LA Mayor 2022, showed Councilman Kevin de León's campaign for mayor with 6% support from likely voters. Ten percent of likely voters were undecided.

If polling holds true, Bass and Caruso would advance to the November general election, although some campaign watchers have pondered whether Caruso - - with his mighty self-funded campaign war chest and weeks-long advertising blitz -- could gather more than 50% of the primary vote and avoid the runoff. But such a result appears to be a longshot, given Bass' strong support base and the overall number of candidates on the ballot.

Bass, 68, would be Los Angeles' first female mayor and only the second Black mayor, after Mayor Tom Bradley, who led the city from 1973 to 1993.

Bass would also be the first sitting House member to be elected mayor of Los Angeles since 1953, when Rep. Norris Poulson was elected. Then-Reps. James Roosevelt, Alphonzo Bell and Xavier Becerra lost campaigns for mayor in 1965, 1969 and 2001. 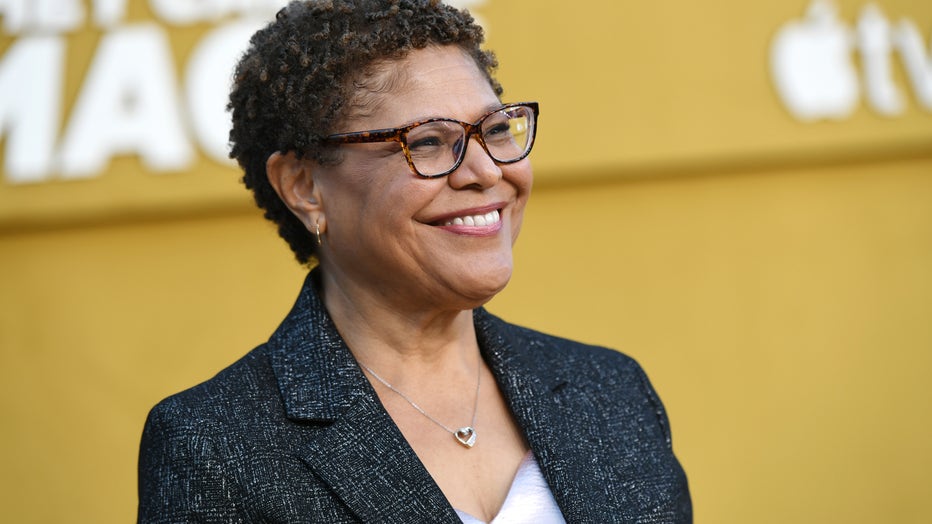 Bass was elected to the House in 2010 and was chair of the Congressional Black Caucus from 2019-21. She was under consideration to be President Joe Biden's 2020 running mate, but then-Sen. Kamala Harris, D- California, was chosen instead.

Bass' campaign has also highlighted her work as an activist before holding elected office. In 1990, she founded the nonprofit Community Coalition, with the goal of transforming social and economic conditions in South Los Angeles.

Her campaign calls for temporary housing and permanent supportive housing to get the city's unhoused population off the street, setting an ambitious goal of housing 15,000 people by the end of her first year as mayor. Her temporary housing plan includes identifying available city-owned land; converting existing motels, hotels, closed hospitals and vacant commercial buildings; and partnering with religious and community institutions, as well as private companies.

Bass also released a climate change plan and said that as mayor she would help lead the city to its goal of achieving 100% clean energy by 2035, as well as continue efforts to decarbonize buildings and achieve a zero emission Port of Los Angeles.

Caruso, 63, is the developer behind The Grove, Palisades Village and other shopping centers. He was born in Los Angeles and served as the president of the civilian Police Commission after being appointed to the panel by Mayor James Hahn in August 2001, as well as on the Board of Water and Power Commissioners. 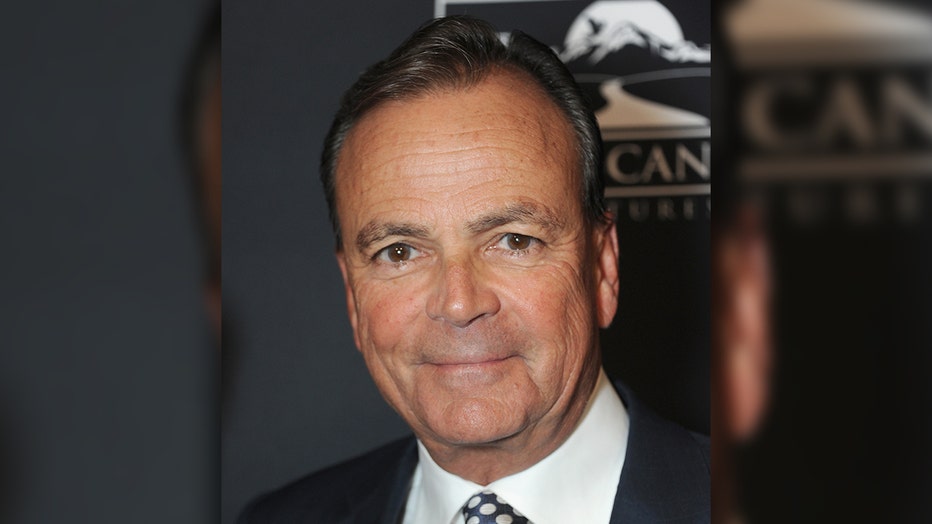 Rick Caruso arrives for the Premiere Of "Hold On" held at Pacific Theatres at The Grove on December 3, 2019 in Los Angeles, California. (Photo by Albert L. Ortega/Getty Images)

In January -- about three weeks before announcing his bid for mayor in a city almost entirely run by Democrats -- Caruso changed his voter registration to Democrat after almost a decade of being registered with no party preference. He was registered as a Republican before that.

He has focused his campaign's platform on expanding homeless shelters with a goal of creating 30,000 beds in 300 days, banning encampments, increasing the LAPD's force and addressing corruption at City Hall, noting the indictment of three City Council members since 2020.

On his campaign website, he criticizes the cost of the city's Proposition HHH program aimed at building 10,000 new units of permanent supportive housing and said he will have a team conduct an audit of wasteful city spending. While Caruso's website says the average cost of the program is $700,000 per unit, the city's controller put the average cost under $600,000.

Under Caruso's plan, projects that cost more than $350,000 per unit would be canceled, and he said he would prioritize projects that keep costs low by using modular housing, shipping containers and other cheaper methods to build housing. He also said he would focus on tiny homes, Project Roomkey and Project Homekey efforts, as well as using land owned by the city to create affordable housing or shelters.

Caruso, who was endorsed by the union that represents LAPD officers, has made rising crime in Los Angeles -- a trend that has occurred in large cities across the U.S. during the pandemic -- a centerpiece of his campaign and pledged to add 1,500 new officers to the LAPD's force in his first term. The city's budget for the 2022-23 fiscal year budget is aimed at expanding the LAPD's sworn personnel to 9,735, but attrition and hiring delays have raised doubts of whether that more modest goal can even be met.

Caruso's public safety plan also includes expanding the LAPD's Gun Unit, expanding laws regarding the safe storage of firearms, doubling the number of gang prevention workers, and making it mandatory for the Los Angeles city attorney to prosecute misdemeanors. He also called for the statewide $950 minimum for felony theft charges to be reduced.

De León, 55, has served on the Los Angeles City Council since October 2020, after a special election for the District 14 seat vacated by Jose Huizar, who was charged in a federal investigation into bribery and corruption. De León previously served as the president pro tempore of the California Senate, where he served from 2010-18. He served in the state Assembly from 2006-10. 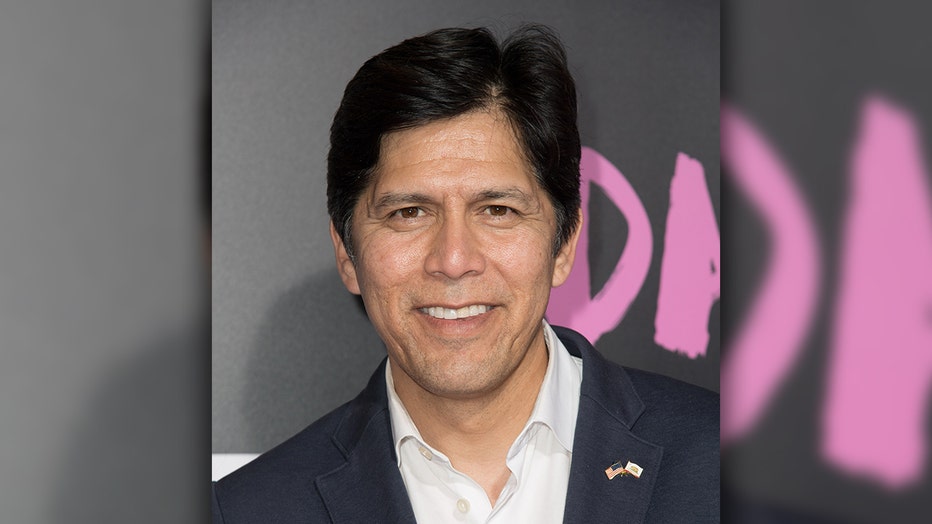 One of de León's early moves on the City Council was a series of motions as part of his "A Way Home" initiative to have the city develop a plan to create 25,000 homeless housing units by 2025. Along with building more shelters and housing for people who are unhoused, De León's campaign calls for mandating affordable housing in all new developments and ensuring that tenants have a right to counsel when facing eviction.

He also advocates expanding the number of social workers and mental health professionals that respond to mental health crises and calls for service related to homelessness, instead of police officers.

During a debate with Caruso and other candidates advocating for expanding the LAPD's force, de León took aim at the plans, saying they would come with added cost to Angelenos. Like Bass, de León called for bringing the department to its currently budgeted level of 9,700 officers.

The race initially included Councilman Joe Buscaino, City Attorney Mike Feuer, and entrepreneur Ramit Varma before the three dropped out in May. Feuer threw his support behind Bass, while Buscaino and Varma endorsed Caruso.

The campaigns have brought in a total of $47.5 million, most from Caruso himself, who has largely self-funded his campaign with nearly $34 million.

In-person voting is already under way in Los Angeles County, with more vote center locations set to open Saturday ahead of election day on June 7.

Along with the race for mayor, Los Angeles voters will decide on citywide races for controller and city attorney, as well as City Council districts 1, 3, 5, 7, 9, 11, 13 and 15.

The top two candidates in each race will continue to a runoff in November, unless one candidate receives more than 50% of the vote during the primary.

Elections for Los Angeles City Council districts 1, 3, 7 and 9 include only two candidates and will be decided in June.

People who missed the registration deadline can still register at any L.A. County vote center through June 7. Once registered, voters will be given a Conditional Voter Registration ballot to vote. The ballot will be counted once it is verified.

More information about the Conditional Voter Registration process is available at bit.ly/3lsQ9D2.

A map of vote center locations can be found at bit.ly/3z7mfw7.