LOS ANGELES - The Los Angeles County Board of Supervisors voted Tuesday to craft an apology for the historic mistreatment of Native Americans in the region.

"The First Peoples of this land faced violence, exploitation and dispossession at the hands of many government entities, including actions sanctioned or directly carried out by Los Angeles County,'' she said in a statement. "Prior to the construction of the San Gabriel Mission, local tribes held 100% of this land. Today, they hold 0% of it. This did not happen by accident.''

Solis said the county would work together with local tribal leaders to develop a public statement that "acknowledges, corrects and disseminates the true historical record of the county's relationship with Native people.'' 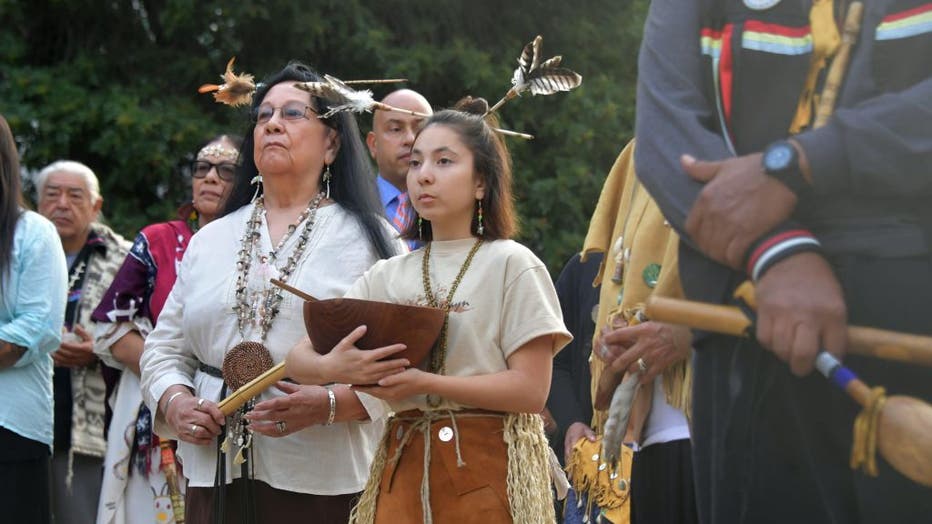 Native Americans join others in a ceremony to mark the first Indigenous People's Day, in place of previously celebrated Columbus Day, on October 8, 2018 in Los Angeles, California. (Photo by Frederic J. BROWN / AFP)

The motion highlights disproportionate health and economic burdens faced by the Gabrieleno Tongva, Fernandeno Tataviam, Ventureno Chumash, San Manuel Band of Mission Indians, Kizh and other local tribes as a result of discrimination.

Supervisor Janice Hahn, who co-authored the motion, said an apology would be just a first step.

"The crimes and atrocities committed against the Native American people here in L.A. County, in California and across the country are a dark stain on our nation's history,'' Hahn said. "An apology is quite literally the least we can do -- but it is an important step to begin to heal the wounds of
the past.''

The board also called for an update on ongoing work to identify county policies, procedures and practices that may have harmed California Native Americans.