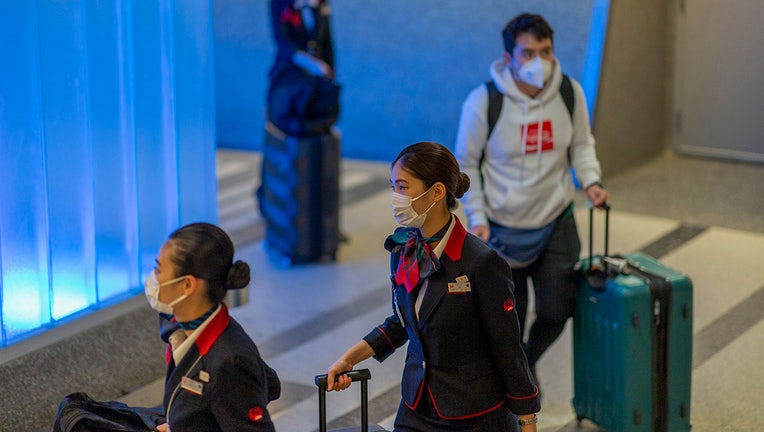 LOS ANGELES - Los Angeles County Department of Public Health officials Monday outlined the latest plans to prevent the spread of the novel coronavirus that originated in China, and which has been contracted by at least one person in the county.

DPH officials said they are working with the state and federal government to implement the new directives to contain the virus, noted as 2019-nCoV, including:

-- Assisting the Centers for Disease Control and Prevention with the safe transport of travelers arriving at LAX from China who need to be quarantined. Those travelers will be isolated at the quarantine station at LAX and then transported to the March Air Reserve Base in Riverside County -- which has already taken in nearly 200 government employees under quarantine after they were possibly exposed to the virus;

-- Updating and distributing guidance to local healthcare providers around screening and treating people with suspected cases;

-- Working with schools, colleges and universities to ensure compliance with new guidance from CDC that excludes newly arriving travelers from China from public settings for 14 days from their last exposure;

-- Providing accurate information to community residents in multiple languages and delivering packets of fact sheets about the novel coronavirus to more than 800 community-based organizations;

-- Establishing protocols for monitoring the health of U.S. citizens and their family members returning from China who are in Los Angeles County and need to remain in their homes for up to 14 days. This includes making sure they receive appropriate services and testing in the event they become ill within 14 days of last exposure;

-- Continued monitoring of all people identified as "close contacts" of any confirmed cases to assess health status and issue exclusion requirements in accordance with CDC directives.

Updates about the coronavirus will be posted on the county website at www.publichealth.lacounty.gov, and on DPH social media accounts @lapublichealth.

A false warning was posted recently that spread on social media, according to Congresswoman Nanette Diaz Barragan, D-Los Angeles, who on Monday demanded a full FBI investigation into people who she said intended to cause a panic in the Carson area.

"The type of misinformation that was spread last week, intentionally made to look like it was official news coming from public health organizations, is an extremely irresponsible and serious action. It cannot be tolerated," Barragan said at a news conference. "That is why I am calling on the FBI to launch a full-scale investigation to determine who created this false letter, and to prosecute all those responsible to the fullest extent of the law."

As a result of the situation in China, the U.S. Department of Health and Human Services declared a public health emergency to allow local, state and federal officials to fully coordinate responses in partnership with public health departments, emergency management teams, airports, health care professionals and first responders.

According to the World Health Organization, the novel coronavirus epidemic has claimed at least 360 lives in China, exceeding the death toll of the severe acute respiratory syndrome -- SARS -- outbreak of 2003. More than 17,000 infections have been documented in China.

The respiratory illness is treatable, and many patients are recovering, according to reports. The DPH said there is also some evidence that the coronavirus can be transferred from an asymptomatic person.

Federal officials said there have been 11 confirmed cases of coronavirus in the United States, with six of those in California, including one case each in Los Angeles and Orange counties.

The virus was first identified by the Chinese government on Dec. 31, when authorities indicated an unknown pneumonia variant was impacting residents of Hubei Province.

Since then, 2019-nCoV has been confirmed in a dozen countries, according to the WHO.

On Friday, the White House issued a set of directives that restrict foreign travelers who have been to China in the last 14 days from entering the United States, and require U.S. citizens and their close family members returning from China to enter one of 11 airports, including LAX, for screening by U.S. Customs and Border Patrol agents.

If travelers show signs of respiratory illness, they will be sent for additional testing to a health care facility. People who were in Hubei Province at any time in the past 14 days will be quarantined at a secure location and monitored for illness.

Returning travelers from other places in China who have been in close contact with a confirmed case of the coronavirus may also be subject to a quarantine, according to the directive.

Returning travelers from all other parts of China who have not been in close contact with a confirmed case of novel coronavirus will be allowed to travel to their final destination where they will be monitored by their local public health department and asked to remain in their homes and avoid public places for 14 days from last exposure.

The U.S. State Department has raised its travel advisory recommendation to "do not travel" to China.