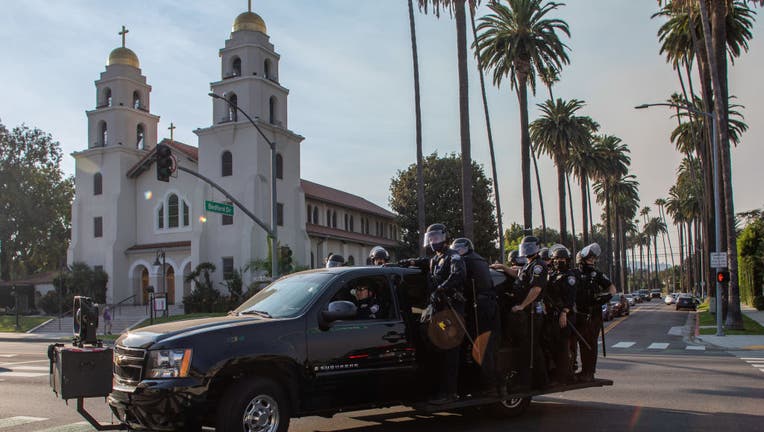 Police officers follow a group of Black Lifes Matter demonstrators who were protesting in front of a pro-Trump rally in Beverly Hills, California on October 3, 2020. (Photo by Apu GOMES / AFP) (Photo by APU GOMES/AFP via Getty Images) (Getty Images)

A big first step today by the LA City Council in reforming the LAPD. They approved a plan that would create crisis response teams that would roll on non violent 911 calls.

With the unanimous vote, the Council will now “issue a request for proposal (RFP) for a non-profit partner to implement a pilot program, and in addition seek recommendations from relevant departments on creating a new classification of city employees that would be responsible for responding to nonviolent calls for service that are currently handled by police officers,” according to a press release.

The city will now seek to partner with a nonprofit organization to implement the pilot program, and will receive recommendations from relevant departments on creating a set of city employees responsible for responding to nonviolent calls for service currently handled by police officers.

"Today marks a seminal moment in our City’s history in our efforts to reimagine public safety," said Council President Nury Martinez in a press release. "Through this unarmed response pilot for non-violent calls, we will help Angelenos get the mental health and other support services they need from trained professionals. We will also free up police officers to do the work they are trained to do. Ultimately, this will also allow us to provide our Black and Brown communities with the resources they deserve."

The decision comes amid a social justice movement following the death of George Floyd and other unarmed Black Americans who died at the hands of police.

"Calling the police on George Floyd about an alleged counterfeit $20 bill ended his life,” longtime Councilmember Wesson said. "If George. Floyd had been met with unarmed, trained specialists for the nonviolent crime he was accused of, he would be turning 47 years old today. This plan will save lives, and I'm so proud of my colleagues on the Council for voting to move this forward."

Coincidentally, the Council voted on what would have been George Floyd's 47th birthday.

As part of the changes, the Council modeled some of its recommended changes after Oregon’s Crisis Assistance Helping Out on the Street Program. This requires contracted service providers and specialists to respond to non-violent calls.

The press release includes the following recommendations by the Council:

Develop and issue a Request for Proposals (RFP) seeking non-profit partners to implement a pilot program for mobile crisis response modeled after Oregon's Crisis Assistance Helping Out On The Streets Program, which would enable 911 operators to dispatch contracted service providers and specialists for non-violent calls that may have a social services component in the City including:

• Behavioral distress as well as

• The size of the City of Los Angeles in population and square mileage.

• The number of mental health-related calls diverted to the LAPD and Los Angeles Fire Department.

• The diversity of the City, including but not limited to:

• The number of languages spoken.

• The number of people living in poverty.

• The number of people experiencing homelessness.

• Any other factors that may be relevant to developing this type of program to meet the needs of City residents.

Report back in regard to changes to state and local law that may be needed to expand the ability of unarmed civilians to handle certain duties currently handled by sworn officers that do not involve serious criminal activity.

Report with recommendations in regard to the creation of a new civilian classification that would be responsible for responding to specified calls for service currently being handled by police officers.

Reports from the nonprofit organizations seeking to partner with the city will be brought before the City Council before the pilot program is implemented.